CHINA would defeat the US should World War 3 ever break out, a Chinese military strategist claims in a bombshell documentary.

Both countries are currently competing to become the global superpower, as both regularly flex their military and economic muscles to fend off the other. However, Wan Xiangsui has revealed how China is a step ahead of its rival on a military basis, by exposing what he believes to be their biggest flaw. The military strategist for the People’s Liberation Army claims that satellites are Donald Trump’s biggest asset but also his biggest weakness.

In 2007, China blew up its own satellite in a test to prove its anti-spacecraft technology works. 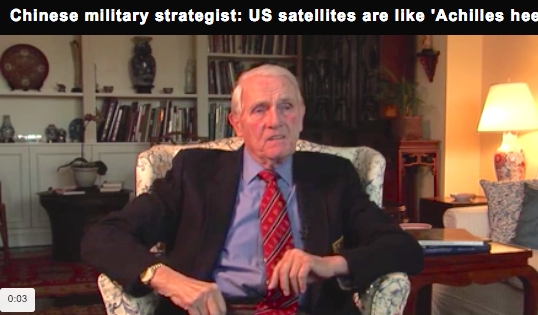 Mr Xiangsui thinks the same technology could prove devastating should war ever break out between the two countries, he revealed during Amazon’s Prime’s “China vs USA: Empires at War” documentary.

He said on the 2015 series: “Satellites are an American strong point but they can also be a weak point.

“The US relies on satellites to control their entire communications network and that is a weakness.

“This dependance reminds me of the Greek legend Achilles who was invulnerable, except his heel.

“And satellites will be America’s Achilles heel.”

Should the Chinese military take out a satellite during the conflict, US communications would be completely sabotaged, leaving warships stranded at sea and prone to attack.

Michael Swaine, a Chinese studies specialist working in Washington DC detailed how submarines could then sneak up on US vessels should satellite communication be compromised.

He said: “There are several things the Chinese have done over the last few years to develop their capabilities.

“One of them is developing larger, more sophisticated submarines.

“These are quieter and much harder to detect – they have built a significant number of them.

“Obviously this becomes a concern to any aircraft carrier."

China has proved its military competence in recent years, too.

On October 26, 2006, a Chinese Song-class submarine surfaced within five miles of the USS Kitty Hawk aeroplane carrier in the Pacific Ocean.

The carrier was surrounded by dozens of ships in a protective formation, but nevertheless, the Chinese sub managed to slip through unnoticed.

Former US Diplomat for China Jon Tkacik admits: “Nobody saw or heard it.

“We knew this submarine was equipped with very advanced torpedoes and, if it wanted to, it could have sunk us.”

By Callum Hoare, the Express