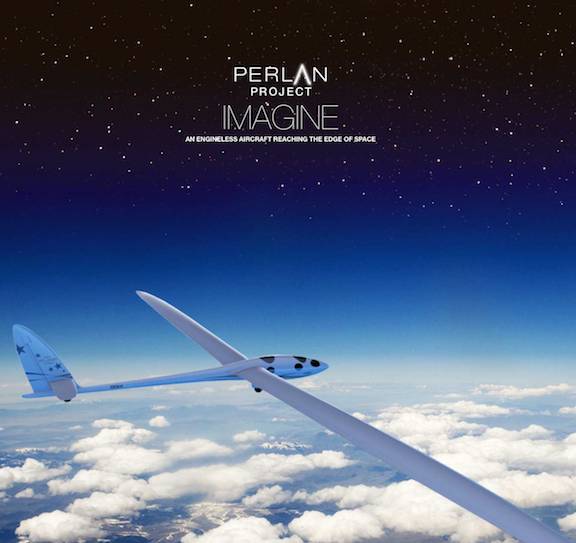 Gliding silently to the very edge of space—once a dream now takes form with plans to hopefully break records later this year.

Airbus Group CEO Tom Enders on Saturday joined the all-volunteer Airbus Perlan Mission II team in the role of co-pilot on the latest test flight of the Perlan 2 glider, the world’s first engineless aircraft designed to reach the edge of space. The flight was led by the project’s chief pilot Jim Payne at Minden-Tahoe Municipal Airport. Enders also received a full briefing on the experimental aircraft’s pressurization and life support systems, which will be critical to mission safety and success when the team attempts to soar at record-breaking altitudes later this year in Argentina.

An experienced helicopter pilot and an aviation enthusiast, Enders also took the controls of the glider to experience the unique handling qualities of an aircraft optimized to fly in air almost as thin as the atmosphere on Mars. 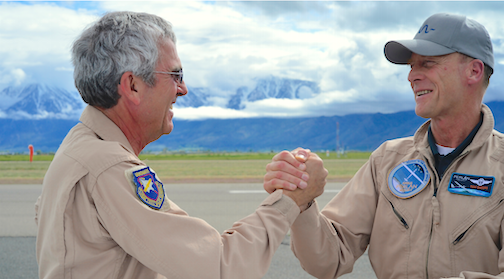 "Airbus Group CEO Tom Enders (right) celebrates a successful test flight of the Airbus Perlan Mission II pressurized glider with Perlan Project chief pilot Jim Payne. The unique engineless aircraft is completing testing in the U.S. before deploying later this year to the mountains of Argentina, where wind conditions will allow it to soar into the stratosphere." (Copyright: Perlan Project photo by Martin Heltai)

“Experiencing the Perlan 2 glider in flight was truly remarkable,” said Enders. “Airbus Perlan Mission II is all about pushing the boundaries of innovation, refining our understanding of our environment and climate change, and inspiring a new generation of aerospace pioneers. We’re honored to see this dedicated team of volunteers carry our name on a journey that will eventually take them to the edge of space.”

The Perlan 2 is a pressurized sailplane designed to ride air currents that, in certain mountainous regions near the north and south poles, can reach into the stratosphere. Last September, the Perlan 2 successfully achieved its first flight in Redmond, Oregon, making news around the world.

The Airbus Perlan Mission II team will be relocating its operations to the Patagonia area of Argentina this summer, where conditions will allow the team to begin higher-altitude flights that will ultimately take them as high as 90,000 feet (27.432 meters), yielding new discoveries in climate change and space exploration. Despite having no engine, the glider’s true flight speed at that altitude will be more than 400 mph (644 km/h) and the air density will be less than two percent of what it is at sea level. The crew will breathe pure oxygen provided by a rebreather system, similar to what astronauts use in space.