GVF ... Asia-Pacific Militaries Prepare For The Worst Through Certification While Working With The Best


What is  Pacific Endeavor? Hosted by the Australian Defence Force and US Pacific Command’s Multinational Communication Interoperability Program, this year’s Pacific Endeavor is the culminating event of a year-long planning effort, which took participants and planners to Papua New Guinea, Hawaii and Mongolia. The exercise wraped-up September 2.

Based on recent real-world events, Pacific Endeavor 2016 features a scenario based on a Category 5 typhoon striking Brisbane, which requires participants to set up a Multinational Coordination Center and forward deploy to two other locations in the affected area. Their mission is to validate and document high-frequency voice and data transfer using ordinary field radios. Commonly referred to as Internet protocol over radio frequency, the practice involves transmitting not only voice, but images and e-mail data over the same IPRF signal. This information is provided from

GVF reports that more than 20 Asia-Pacific militaries plan to strengthen regional disaster preparedness and response through expanded collaboration with GVF – the international association of the satellite communications industry – and its Member companies, which include the world’s leading providers of broadband connectivity. 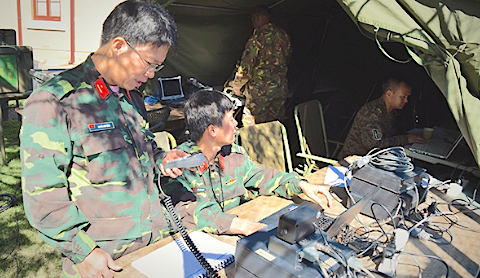 The expansion plan was established last week during “Pacific Endeavor”, an annual joint program of militaries from throughout the region sponsored by the US Pacific Command (PACOM) through the support and coordination of PACOM’s MCIP Management team. It will build upon the previous information sharing and certification by GVF of participants from Asia-Pacific militaries on the use of satellite communications systems to ensure that in a crisis or disaster there are individuals available throughout the region who can assist with relief efforts. In addition to capacity building, collaboration will also be expanded to address Cyber Security and Validation & Benchmarking initiatives.

“With support from leading satellite industry providers of bandwidth, Earth stations, integration, and online interactive content mentored on site, GVF will be working closely in collaboration with the MCIP team at PACOM to facilitate information sharing for those in their organizations who will stand ready to help save lives during any disasters that may strike the Asia-Pacific region,” said David Hartshorn, Secretary General of GVF.

“Our goal is very simple,” said Riaz Lamak of Mahdi Bagh Computers and a GVF Point of Contact for Pacific Endeavor. “ Our collaboration is for Capacity Building & Information Sharing, bringing the latest technology from our Industry for HADR resources. We want to provide information that can help save lives. Militaries need quick deployments as satellite communications are an important base for connectivity. The most important thing is that people on the ground are able to ensure that the network can be established rapidly, works properly, the signals don’t drop, and communications happen,” he said.