“Congratulations to Lockheed Martin Commercial Launch Services and Mexico’s Ministry of Communications and Transportation on today’s successful delivery of the Morelos-3 satellite into orbit, providing advanced telecommunications throughout Mexico.” said Jim Sponnick, ULA vice president, Atlas and Delta Programs.  “Today was an especially proud day for our team as we launched our 100th successful one-at-a-time mission since ULA was formed in 2006.  Congratulations to the entire team including our many mission partners on this unprecedented achievement.”

The Morelos-3 launch was accelerated to an earlier position on the Atlas launch manifest.  The acceleration was accommodated by an agreement with the U.S. Air Force. The agreement allowed the MEXSAT customer to launch atop an Atlas V rocket utilizing a launch slot that was previously manifested for a Global Positioning System satellite. This change demonstrates ULA’s ability to meet the needs of commercial customers and the Air Force’s willingness to accommodate real-time needs of other satellite programs. 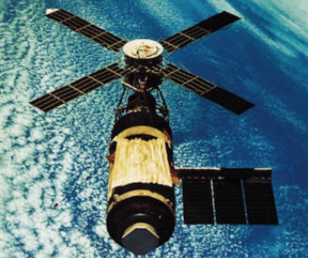 This mission was launched aboard an Atlas V 421 configuration vehicle, which includes a 4-meter diameter payload fairing and two Aerojet Rocketdyne solid rocket motors attached to the Atlas booster. The Atlas booster for this mission was powered by the RD AMROSS RD-180 engine and the Centaur upper stage was powered by the Aerojet Rocketdyne RL10C-1 engine. This was the 57th Atlas V launch since the vehicle’s inaugural mission in 2002 and the fifth in the 421 configuration.

Morelos-3 is part of the Mexsat constellation of satellites, which provide secure communications for Mexico’s national security needs and communications to rural zones to complement other existing networks. The Mexsat program is an end-to-end satellite communications system that provides 3G+ communications services to mobile terminals across multiple platforms. These services include education and health programs, voice, data, video and internet.

ULA's next launch is an Atlas V rocket carrying a payload for the National Reconnaissance Office (NRO), scheduled for Oct.ober 8 from Space Launch Complex-3 at Vandenberg Air Force Base, California.

With more than a century of combined heritage, United Launch Alliance is the nation’s most experienced and reliable launch service provider. ULA has successfully delivered 100 satellites to orbit that provide critical capabilities for troops in the field, aid meteorologists in tracking severe weather, enable personal device-based GPS navigation and unlock the mysteries of our solar system.

The Lockheed Martin Commercial Launch Services and ULA team is proud to be the launch provider for the Secretaría de Comunicaciones y Transportes de México (Ministry of Communications and Transporta- tion of Mexico) Morelos-3 satellite. Morelos-3 is an important element of the Mexsat program, Mexico’s next-generation telecommunications system. 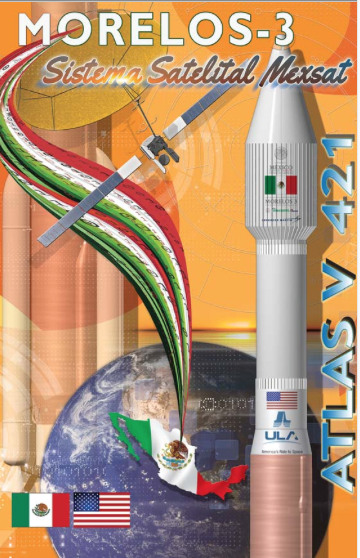 Our teams are focused on attaining Perfect Product Delivery for the Morelos-3 mission, which includes a relentless focus on mission success (the perfect product) and also excellence and continuous improvement in meeting all of the needs of our customers (the perfect delivery).

Our thanks to the entire launch team, including our suppliers, as well as our mission partner—the Ministry of Communications and Transpor- tation of Mexico—for their hard work and commitment to mission success. Go Atlas! Go Centaur! Go Morelos-3!

Morelos-3 is a 702HP geomobile satellite built by The Boeing Company. The 702HP satellite will supply 14 kilowatts of power through 5-panel solar array wings using high-efficiency ultra triple-junction gallium arsenide solar cells. It will also carry a 22-meter L-band reflector that enables connectivity to handheld terminals, complemented by a 2-meter Ku-band antenna. The Boeing-built Morelos-3 is designed for a 15-year service life.  Morelos-3 will be the 57th Atlas V launch since the vehicle’s inaugural mission in 2002 and the fifth in the 421 configuration.