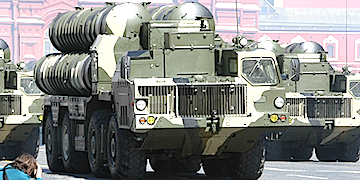 Israel is reporting that their Eros-B satellite has taken images of a stockpile of Russian made advanced Iskander SS-26 short-range mobile ballistic missiles on trucks inside an army base in the Syrian Army’s Latakia base, in western Syria.

It is believed that heavy rains forced the Russians to move the missile systems, thereby exposing them to satellite photography.

The images are evidence that Russia has provided Syria with a wide array of the SS-26, referred to as ‘Stone’ by NATO, the most advanced missiles in its possession. The SS-26 can destroy air defense and missile defense systems as well as other targets at a distance of 400-500 kilometers, and is capable of carrying a nuclear warhead. This places Haifa, Jerusalem, and Tel Aviv within striking distance, though experts say the missiles are under control of Russian forces, and not the Syrian Army.