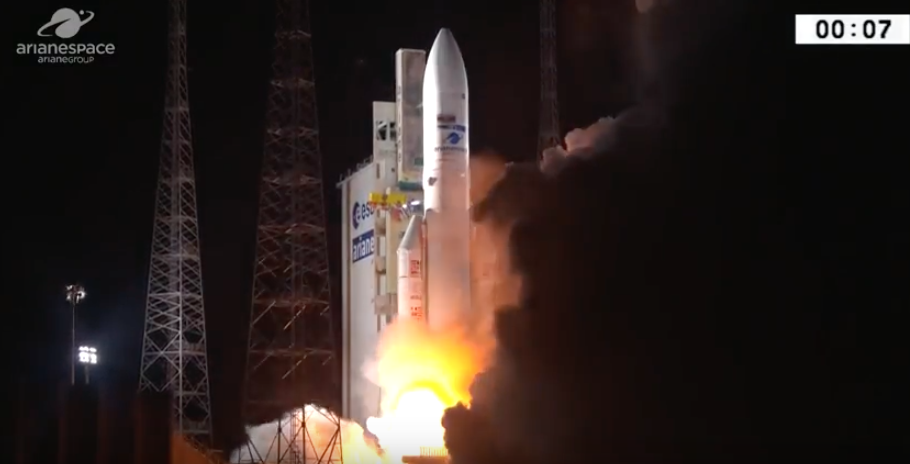 Kudos to Arianespace with today's successful 100th launch of Ariane 5 from the European spaceport in Kourou (French Guiana).

This event was the result of the efforts of an enormous network of specialists and employees whose common goal was to see this mission's success of placing two telecommunications satellites Horizons 3e and Azerspace-2/Intelsat38 into orbit weighing a total of 9,940 kg... and they did.

The launch can be viewed here.

In 22 years of service the Ariane 5 has launched more than 170 satellites to geostationary transfer orbit (GTO) as well as the Rosetta probe, fiveedtransfer vehicles (ATV) to resupply the International Space Station (ISS), and 12 satellites for the European Galileo navigation service 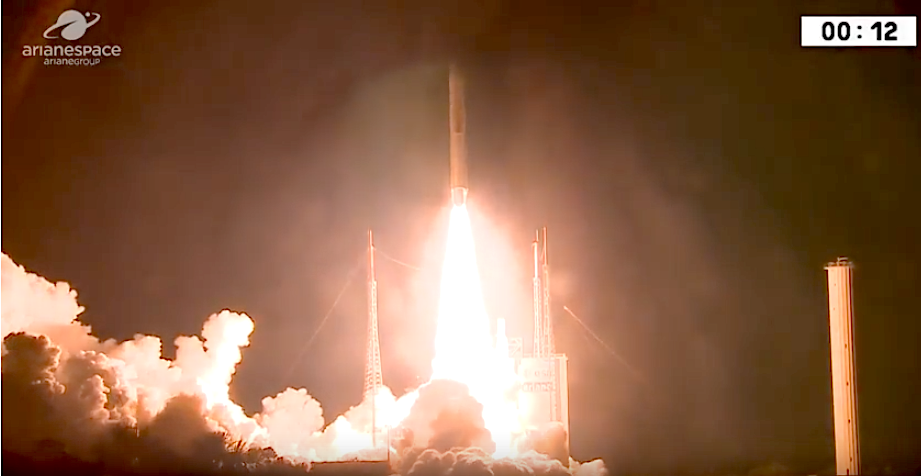 The performance of this Ariane 5 ECA was 9,940 kg net total mass for the two satellites and 10,827 kg gross mass (including the ACU – payload adaptors, the SYLDA – Ariane dual launch system, and the LVA 3936 – Launch Vehicle Adaptor). Since 2016, the net performance gain for Ariane 5 has increased by 150 kg.

Alain Charmeau, CEO of ArianeGroup stated that, "Launching 10 metric tons into orbit is now normal business for Ariane 5, and this 100th lift-off is an opportunity to celebrate the expertise of the teams at ArianeGroup, Arianespace and all of their industrial partners across Europe, who are working constantly to improve their capabilities and the performance and competitiveness of our launcher, while at the same time preparing the arrival of Ariane 6 in just two years from now.

"I warmly thank them and the European Space Agency, CNES and all our partners in European space, with whom we celebrate this success. Without the interest and constant support of the political powers in Europe over these two decades, this success would not have been possible. During the course of these 100 flights since 1996, Ariane 5 has not only supported the development of the European and global space industry in the field of telecommunications, but has also contributed to exploration and to science. 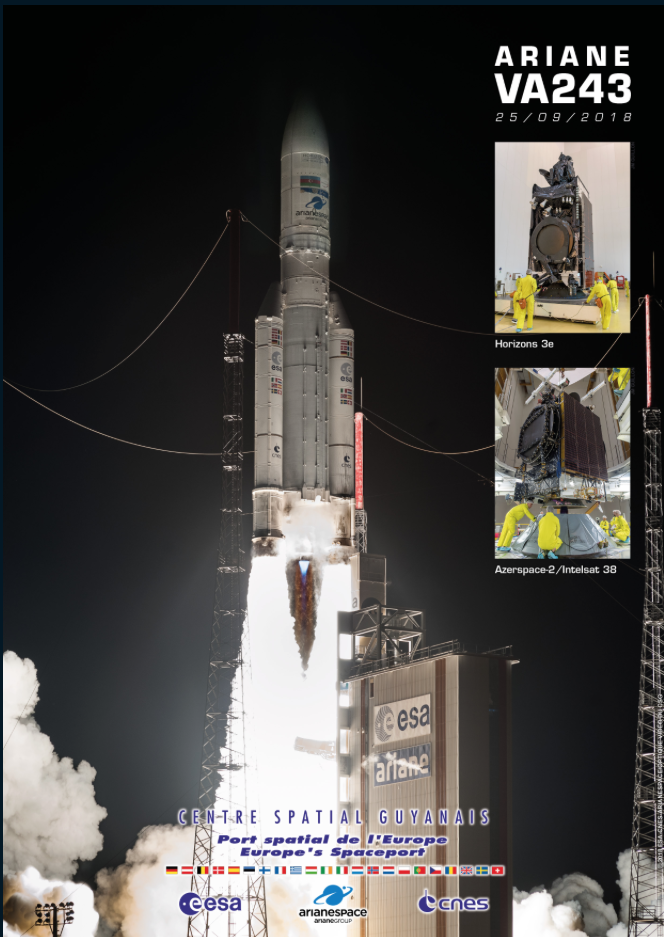 "Soon Ariane 6 will take up the torch. Until that time, other impressive missions await Ariane 5, whose next flight is a very important one: BepiColombo which will head for Mercury next month. Ariane 5 has not yet written the final page of its space legend."

In celebration of this 100th launch, more than 7,000 people around Europe virtually launched Ariane 5 themselves on social media. This successful joint campaign by ArianeGroup, Arianespace, CNES and ESA was launched on July 25 to raise awareness about Ariane 5 among the people of Europe. Finally, the various ArianeGroup sites in France (notably in Kourou) and in Germany, celebrated this 100th launch by sharing memories and future ambitions with their 9,000 employees and all their partners.

As the industrial lead contractor for development and operation of the Ariane 5 and Ariane 6 launchers, ArianeGroup coordinates an industrial network of more than 600 companies in 13 European countries, including more than 350 Small and Medium Enterprises. ArianeGroup oversees all the industrial activities, from the performance improvements and studies necessary for Ariane 5 up to its production, the provision of data or software specific to each mission, without forgetting marketing activities via Arianespace. This chain includes equipment and structures, engines manufacturing, integration of the various stages and finally launcher integration in French Guiana.

Other statistics pertaining to Ariane 243's launch include 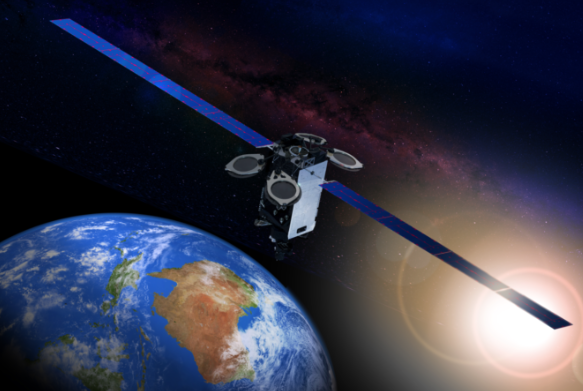 Horizons 3e was deployed from Ariane 5’s upper payload slot and is owned by a joint venture of Intelsat and SKY Perfect JSAT Corporation. Built by Boeing using Intelsat’s EpicNG design, it will provide coverage for aeronautical and maritime mobility, fixed and wireless operators, as well as mobility and government customers. In addition, Horizons 3e is the first satellite in Intelsat’s EpicNG spacecraft series to feature entire Ku-band spot beams utilizing multiport amplifiers that optimize power across the spacecraft.

As Ariane 5’s upper passenger on Flight VA243, Horizons 3e is owned by a joint venture between Intelsat and SKY Perfect JSAT, marking the fourth collaboration between the two companies.

Horizons 3e completes the Intelsat EpicNG network’s global coverage, bringing the next level of high-throughput services to the Asia-Pacific region and expanding coverage in the Pacific Ocean. The all-digital Horizons 3e payload represents a continued evolution of the award-winning Intelsat EpicNG platform. It features full beam interconnectivity in C- and Ku-bands and also includes a multiport amplifier that optimizes power across the satellite, enabling a power adjustment of each spot beam to better meet a customer’s throughput demands. This feature brings additional efficiency and flexibility to address regional and application requirements for broadband, mobility and government customers operating in the Asia-Pacific and Pacific Ocean.

The 6,441-kg. satellite will provide 30 gigabits per second of bandwidth for fixed and mobile customers, and it is to be stationed at the 169 degrees East orbital location to replace Intelsat 805.

Horizons 3e is the 60th Intelsat satellite, as well as the 20th for SKY Perfect JSAT, to be launched by Arianespace — and as such, it embodies more than 35 years of shared success in the unique partnership between Intelsat, SKY Perfect JSAT Corporation and Arianespace.

Chicago-headquartered Boeing is the prime contractor of Horizon 3e. It is the 56th satellite from this manufacturer to be launched by Arianespace.

The Azerspace-2/Intelsat 38 co-passenger to be orbited by Flight VA243 from Ariane 5’s lower passenger position was produced by SSL, and is designed to provide a range of telecommunications relay duties at the service of its two operators — Intelsat and Azercosmos, a company owned by the government of Azerbaijan Republic. 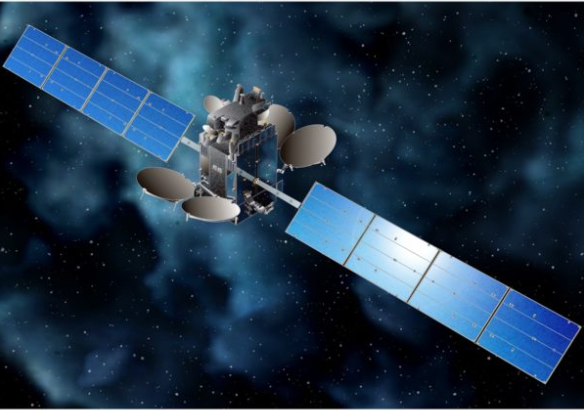 Azerspace-2/Intelsat 38 is a multi-mission satellite to be located at 45 degrees East.

For the second time, Arianespace will support the development of Azercosmos — the premier satellite operator in the South Caucasus region — by launching Azerbaijan’s second geostationary satellite, Azerspace-2.

It will be Azercosmos’ second telecommunications satellite and is to expand on the current capacity of Azerspace-1. Azerspace-2 will also increase the coverage area and spectrum of services provided by Azercosmos. The satellite’s planned orbital position is only one degree away from the current Azerspace-1 orbital location at 46 degrees East, which creates favorable opportunities for existing and new customers to start expanding their current satellite solutions.

The satellite will offer enhanced capacity, coverage and service offerings to support growing demand in the region for Direct-to-Home (DTH), government and network services in Europe, Central and South Asia, the Middle East and Sub-Saharan Africa.

It is ideally designed for smaller antennas and has cross-connectivity between East Africa, West Africa and Central Africa, Europe and Central Asia.

Intelsat 38 will provide Ku-band capabilities and deliver continuity of service for the Intelsat 12 satellite located at 45 degrees East. The satellite will host leading Direct-to-Home television platforms for the fast-growing Central and Eastern Europe and Asia-Pacific regions.

It will support the growth objectives of customers operating in these regions. Intelsat 38 will also provide critical broadband connectivity for corporate network and government services in Africa.

It will be the 65th satellite based on an SSL platform to be launched by Arianespace.