Arianespace and the European Space Agency (ESA) have announced the signature of a launch services contract with a Soyuz launch vehicle for the EarthCARE satellite. 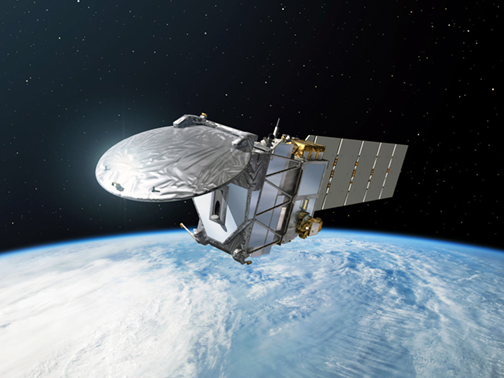 Artistic rendition of ESA's EarthCARE satellite, which will advance understanding of the role that clouds and aerosols play in reflecting incident solar radiation back out to space and trapping infrared radiation emitted from Earth’s surface. Image by ESA.

EarthCARE is a joint collaborative satellite mission conducted between ESA and the Japan Aerospace Exploration Agency (JAXA) that delivers the Cloud Profiling Radar (CPR) instrument. ESA is responsible for the entire system, including the Spacecraft, three instruments including ATmospheric LIDar (ATLID), a Multi-Spectral Imager (MSI) and a Broad-Band Radiometer (BBR), plus the Launcher and Ground Segment (with exception of the CPR data segment).

The EarthCARE mission will use a Soyuz launch vehicle, with the launch period starting in June 2022 from the Guiana Space Center, Europe’s Spaceport in French Guiana (South America). The satellite will have a mass at liftoff of approximately 2,350 kg. and will circle Earth in SSO, crossing the equator in the early afternoon to optimize daylight conditions, at an altitude of 390 km. The altitude needs to be as low as possible to optimize use of both the LIDAR and radar, but not too low where atmospheric drag would impact fuel consumption and the lifetime of the mission. EarthCARE has a design lifetime of three years, including a six-month commissioning phase.

The mission’s goal is to provide a picture of the 3D-dimensional spatial and the temporal structure of the radiative flux field at the top of atmosphere, within the atmosphere and at the Earth’s surface. The high-performance LIDAR and radar technology, plus the synergistic use of the different remote sensing techniques embarked on board EarthCARE, will deliver unprecedented datasets allowing scientists to study the relationship of clouds, aerosols and radiation at accuracy levels that will significantly improve our understanding of these highly-variable parameters.

The ESA/JAXA EarthCARE mission will provide this information to improve predictions about the weather and future climate. The satellite prime contractor is AIRBUS Defence and Space (DE).

Josef Aschbacher, ESA's Director of Earth Observation, said EarthCARE is built to better understand climate change by measuring clouds and atmospheric particles. It is a joint mission between ESA and JAXA, the Japan Aerospace Exploration Agency, demonstrating once more what international cooperation can achieve.

Stéphane Israël, the CEO of Arianespace, added the company is delighted that ESA has awarded the launch of EarthCARE to Arianespace. As a result, the company will be providing autonomous European access to space for this emblematic mission, which is to use technologies at the service of this planet. It also is an honor for Arianespace to once again participate in an ESA program in cooperation with the Japanese space agency, JAXA.