SES shared the news regarding the successful launch of its four new K-Band O3b Medium Earth Orbit (MEO) satellites by Arianespace onboard a Soyuz rocket, from the Guiana Space Center in Kourou, French Guiana that will join SES’s existing constellation of 12 MEO satellites, orbiting at approximately 8,000 km from Earth, four times closer to the planet than geostationary (GEO) satellites delivering connectivity with a low latency, fiber-like performance. 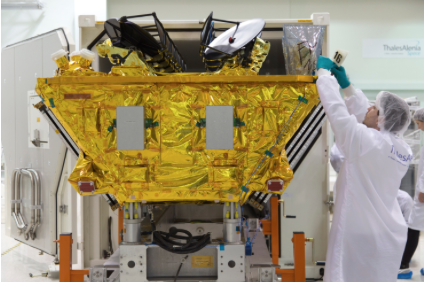 The four new O3b satellites, built by Thales Alenia Space, will enable SES to bring more capacity, enhanced coverage and increased performance to market. By furthering its O3b fleet, SES is scaling its unique ability to connect people, businesses, and continents with high performance communications anywhere on Earth. The O3b constellation is expanding to continue to drive digital equality and to support digital transformation across the globe. The additional capacity will enable SES Networks to cater to the growing consumption of bandwidth in the telecom, cloud, maritime, energy, and government markets.

Steve Collar, Chief Executive Officer at SES Networks, and CEO designate of SES, said that they are very excited to have four more O3b satellites in orbit, and they look forward to them joining the constellation in May and serving their customers around the globe. The demand for high performance bandwidth and networks continues to grow and, as the only successful non-geostationary broadband system, they need these new satellites to fulfill demand across a wide range of verticals and applications. From connecting underserved communities and meaningfully transforming lives through improved broadband access, to delivering state-of-the-art satellite-enabled network services to ships, planes and government platforms, their  O3b fleet offers unique and differentiated performance and is driving their customers’ businesses forward.

Martin Halliwell, Chief Technology Officer at SES, added that this was the fourth launch performed by Arianespace for their O3b fleet and they have yet another batch of O3b satellites planned for 2019 on their Soyuz rocket as well. This is the beauty of their MEO constellation: it can easily be scaled to respond to demand in an agile manner while beams can be allocated dynamically to where the demand is, and thus deliver low-latency connectivity where their customers need it. By augmenting their fleet, they will offer more throughput, more coverage, and more capabilities to their customers.

Stéphane Israël, CEO of Arianespace commented that with this second launch of the year, the 18th Soyuz from the Guiana Space Center, Arianespace is very proud of the confidence placed by SES in their service solutions for both MEO satellites and GEO satellites. They are very pleased to support their long-standing partner SES in the expansion and evolution of its O3b fleet.

In addition to these four new satellites, another four O3b satellites are scheduled to launch in H1 2019. Historically, the first 12, O3b satellites were launched by three Soyuz launch vehicles in 2013 and 2014.