SES announced today that SES-12 was successfully launched onboard a flight-proven SpaceX Falcon 9 rocket from Cape Canaveral in Florida, United States, at 00:45 local time. With six wide beams and 72 high throughput user spot beams, SES-12 is one of the largest geostationary satellites that SES has ever launched. 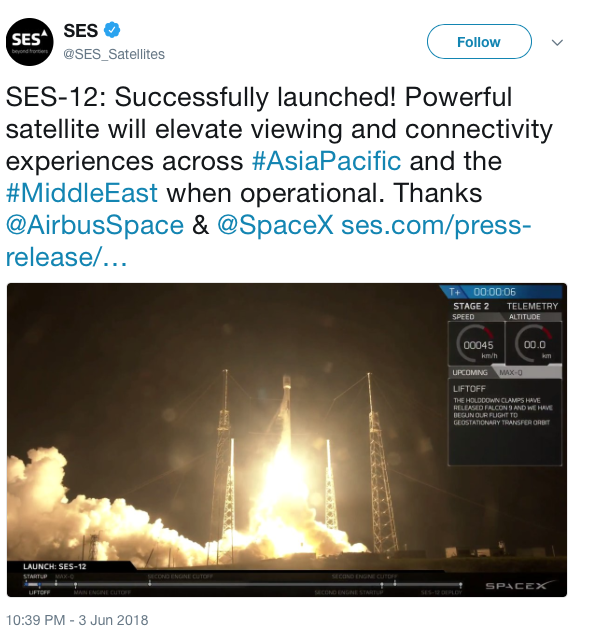 SES-12, which is uniquely designed with state-of-the-art wide beams and high throughput beams, will join SES-8 at 95 degrees East to meet the diverse needs of video, fixed data, mobility and government customers across Asia-Pacific and the Middle East. SES-12 is the latest satellite that SES has launched to that orbital position where it will operate under the authority of the Kingdom of the Netherlands. It will replace and augment the services currently being provided on SES’ NSS-6 satellite.

Together with SES-8, SES-12 will reach 18 million TV homes from its orbital position. The satellites will provide pay-TV operators the reliability and scalability to elevate viewing experiences by adding more content and delivering higher-quality picture quality to address the ever-increasing audience demand for High Definition (HD) and Ultra HD content.

Like SES-14 and SES-15, which serve the Americas, the SES-12 high throughput payload is SES’ solution for enhancing connectivity in the aeronautical and maritime segments across Asia-Pacific and the Middle East. SES-12 will also be pivotal in enabling governments to provide connectivity programs to bridge the digital divide, and in allowing telcos, mobile network operators and internet service providers to deliver more reliable cellular backhaul and faster broadband services.

Martin Halliwell, Chief Technology Officer at SES said that more content. More immersive viewing experience. Blazing internet speeds. Reliable cell coverage. All of these dynamic customer requirements can now be met with the successful launch of SES-12, which will provide incremental high performance capacity and offer greater reliability and flexibility to their customers.

With six wide beams and 72 high throughput user spot beams, SES-12 is one of the largest geostationary satellites that SES has ever launched. The spacecraft also has a Digital Transparent Processor (DTP) that increases payload flexibility to provide much more customizable bandwidth solutions to SES's customers. The all-electric SES-12 spacecraft was built by Airbus Defence and Space, and will rely on electric propulsion for orbit raising and subsequent in-orbit maneuvers. SES-12 will join SES’ network of seven geostationary satellites and 16 MEO satellites across Asia-Pacific and the Middle East.