ABS-3A Ramps Up Ahead Of Schedule + Goes Commercial

[SatNews] “With a successful launch, testing and execution of orbit operations, we were able to deliver the first 702SP to ABS about one month earlier than planned...”

The ABS-3A satellite is now in full commercial use. The satellite started service on August 31st, 2015 to serve the Americas, Africa, Europe and the Middle East regions. 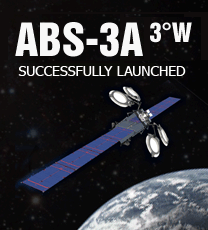 Launched on March1st, 2015, the ABS-3A satellite built by Boeing has performed even better than expected having arrived ahead of schedule. In-Orbit tests have been successfully completed and the satellite became fully operational on August 31st, 2015.

“ABS’ innovative design and procurement approach for satellites is designed to provide the best possible economics to our customers. ABS-3A and along with ABS-2A, launching in early 2016, will deliver these exceptional economics on current next-generation satellites. Both ABS-3A and 2A will further strengthen and solidify our global expansion and offer flexible capacity to our growing fleet,” commented Tom Choi, CEO of ABS.  “We look forward to serving diverse markets using increasingly innovative and affordable solutions for many of ABS’ current and future customers.”

“With a successful launch, testing and execution of orbit operations, we were able to deliver the first 702SP to ABS about one month earlier than planned,” said Mark Spiwak, president, Boeing Satellite Systems International. “The 702SP product line was designed to bring the latest technology into the hands of customers seeking adaptable and affordable solutions. In addition, the 702SP’s patented dual-launch capability helps customers share launch costs, which can significantly lower overall expenses for a satellite owner.”