"And We are Off" ... Arianespace Sends Telecommunication Satellites Soaring for Eutelsat and ISRO 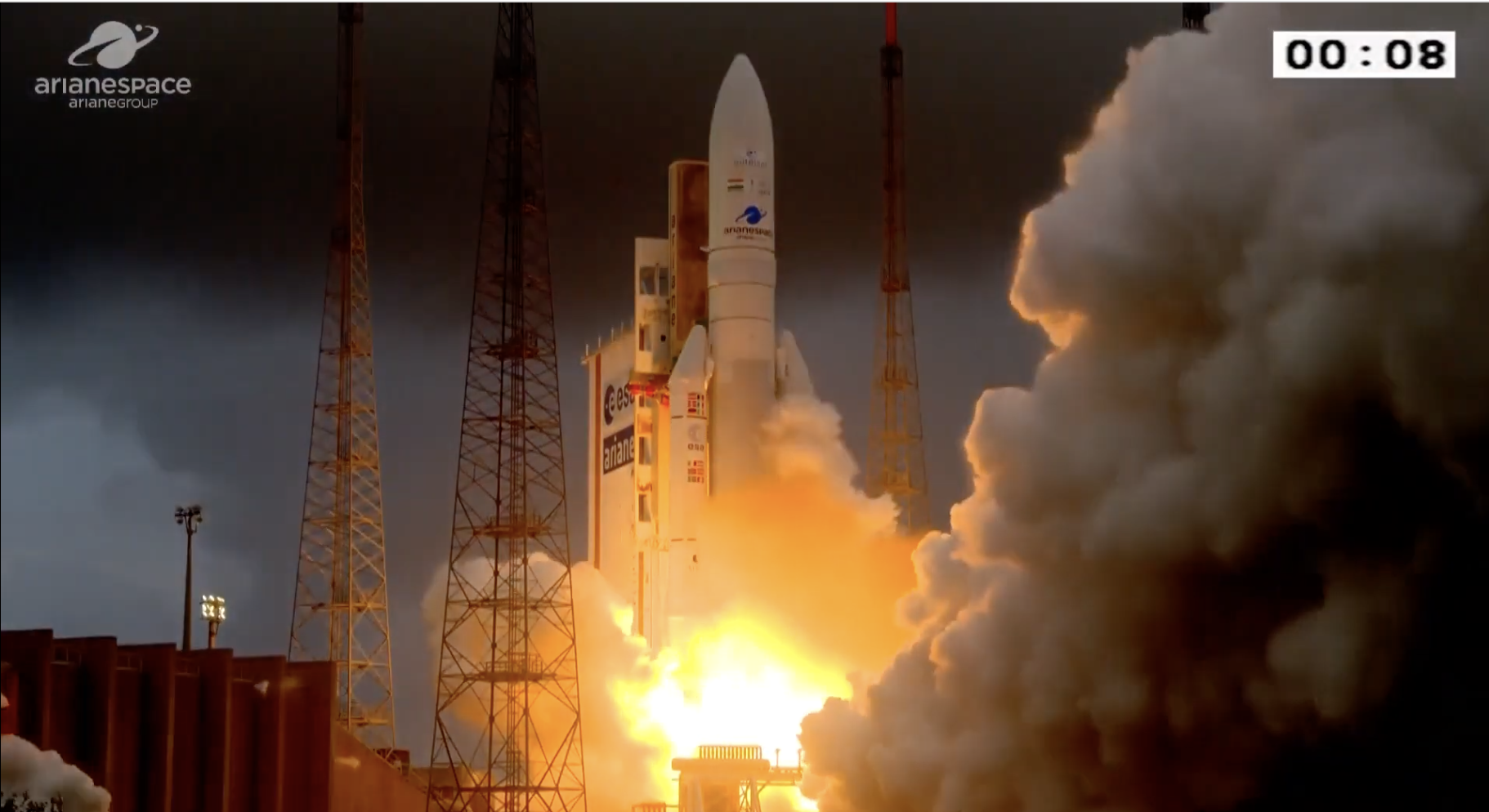 "And we are off, Ariane 5 is blazing a trail across the equatorial skies," said the announcer for today's launch.

Flight VA251 went smoothly for Arianespace's first flight of the new year and new decade, with the send off of two satellites dedicated to telecommunications, EUTELSAT's KONNECT and ISRO's GSAT-30.

For this 251st launch of an Ariane-series vehicle – designated Flight VA251 in Arianespace’s numbering system – the payload lift performance to geostationary transfer orbit (GTO) is approximately 7,888 kg. This combined total factors in EUTELSAT KONNECT and GSAT-30, plus the dual-passenger dispenser system and satellite integration hardware.

And with this the 40th anniversary year for Arianespace, their CEO, Stephane Israel stated that Arianespace is targeting a record pace in 2020.

Arianespace released their announcement stating that... 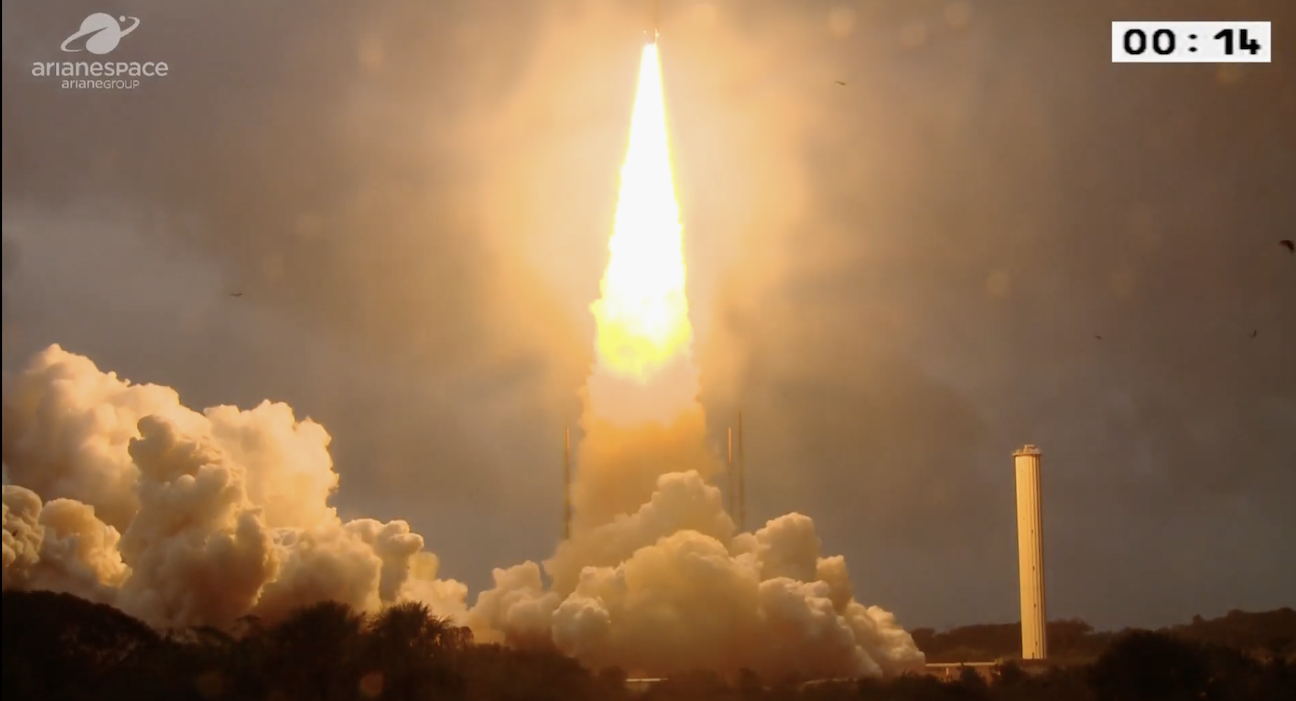 With this latest launch, Arianespace continues to help reduce the digital divide worldwide, while confirming its leadership in the geostationary orbit launch market.

Today’s launch, designated Flight VA251, was the 315th mission by the Arianespace launcher family and the 107th by an Ariane 5 version.

Following the launch, Arianespace Chief Executive Officer Stéphane Israël said: “As we enter the year of our 40th anniversary, Arianespace is targeting a record pace in 2020. It begins with this initial success of Ariane 50 at the service of two long-standing customers and partners: the French operator Eutelsat, and ISRO, the Indian space agency. I would like to thank our two loyal customers for entrusting us.

The launch orbited EUTELSAT KONNECT, the first satellite based on the Spacebus NEO platform of Thales Alenia Space, developed with the support and expertise of ESA and CNES. EUTELSAT KONNECT will help reduce the digital divide in Europe and Africa; as will our second passenger on today’s flight, GSAT-30, designed, manufactured and operated by ISRO to enhance communications on the Indian subcontinent. More than ever, placing space at the service of a better life on Earth remains Arianespace’s primary purpose.

With today’s Flight VA251 mission, we have once again clearly underscored our ability to adapt to all customer requirements, while also confirming our leadership in the geostationary orbit launch services market.”

The all-electric Ka-band EUTELSAT KONNECT satellite is the 34th Eutelsat relay platform to be launched by Arianespace since its initial mission for this operator in 1983. EUTELSAT KONNECT is the first satellite to use the Spacebus NEO platform from Thales Alenia Space. This project has been developed within the scope of the Neosat program set up by the European Space Agency (ESA) and the French CNES.

EUTELSAT KONNECT will offer total capacity of 75 Gbps. It will enable Eutelsat to provide Internet access services for companies as well as individuals at rates up to 100 Mbps. It will contribute to reducing the digital divide by bringing broadband connectivity to 40 countries in Africa and 15 countries in Europe.

In Africa, EUTELSAT KONNECT also will provide shared Internet access between several users based on the creation of public Wi-Fi terminals, with users able to buy coupons that can be paid via their mobile phones.

More than half of all Eutelsat satellites have been orbited by Arianespace. Having six more satellites booked with Arianespace, Eutelsat also is the first commercial customer to order an Ariane 6 launch.

EUTELSAT KONNECT is the 163rd satellite built by Thales Alenia Space to be launched by Arianespace. Five more satellites from this manufacturer currently are in Arianespace’s backlog.

GSAT-30 is the 24th Indian geostationary satellite to be launched by Arianespace. This mission once again illustrates the exceptional relationship between Arianespace and the Indian space agency, starting with the launch of the country’s APPLE experimental satellite in 1981, using the third Ariane launcher on Flight L03.

Designed and built by ISRO, using the enhanced I-3K platform, it will deliver high-quality television, telecommunications and broadcasting services to all of India, including islands, with a design life exceeding 15 years.

A year after the launch of GSAT-31, GSAT-30 will replace the Insat 4A satellite as ISRO continues to use space to bridge the digital divide on the Indian subcontinent, as part of its ambitious space program. This program calls on all types of space applications, including navigation, Earth observation, communications and the broadcast of educational programs, while also contributing to scientific research and planetary exploration.

EUTELSAT KONNECT – which was produced by Thales Alenia Space for Eutelsat – is riding in the upper position of Ariane 5’s payload arrangement, was released first in the flight sequence at 27 minutes following liftoff.

GSAT-30 was designed and manufactured by the Indian Space Research Organization (ISRO), and was deployed from Ariane 5’s lower passenger position 38 minutes into the flight – completing the mission. For its initial flight of 2020, Arianespace will orbit two telecommunications satellites using an Ariane 5 launch vehicle from the Guiana Space Center: EUTELSAT KONNECT for the operator Eutelsat; and GSAT-30 for the Indian Space Research Organization (ISRO). 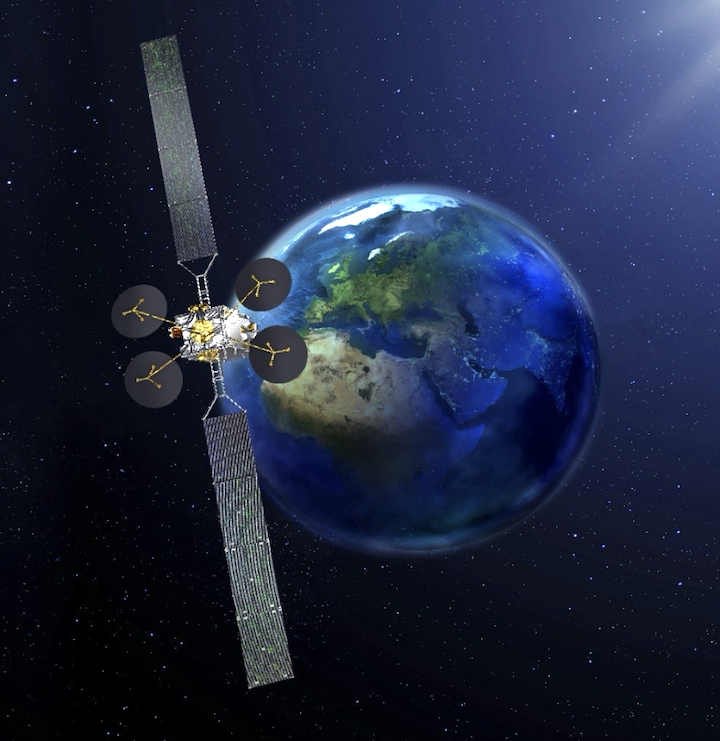 Eutelsat Communications is established in Paris, with offices and teleports located around the globe. Eutelsat provides capacity on nearly 40 satellites to clients that include broadcasters and broadcasting associations, pay-TV operators, video, data and internet service providers, enterprises and government agencies.

Once in orbit, EUTELSAT KONNECT will offer total capacity of 75 Gbps and by next autumn will allow the operator to provide internet access services for companies and individuals alike at up to 100 Mbps. The satellite will help to fight against the digital divide by bringing broadband internet across 40 countries in Africa and 15 countries across Europe.

In Africa, EUTELSAT KONNECT also will, through the establishment of public Wi-Fi terminals, share internet access between several users, marketed in the form of coupons that can be paid via mobile phone.

EUTELSAT KONNECT will allow the in-orbit validation of the complete end-to-end system of the new Spacebus Neo product line, including the fully-electric orbit-raising phase. 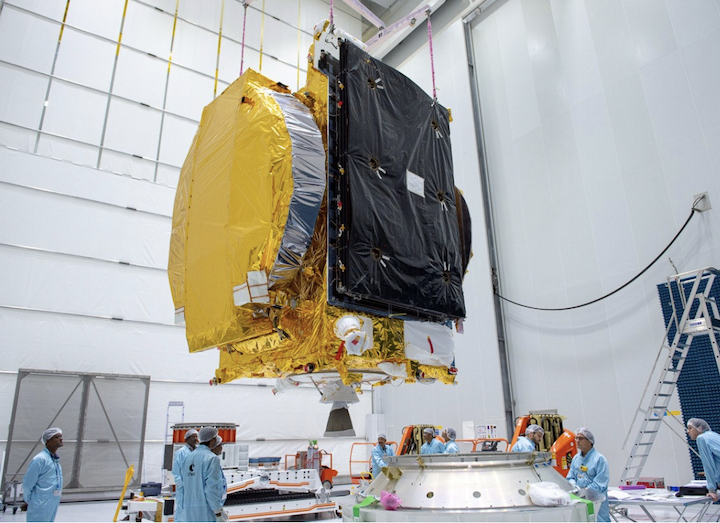 Arianespace will orbit GSAT-30 on the initial Ariane 5 launch in 2020, after delivering GSAT-31 for ISRO one year ago.

To be installed as flight VA251’s lower passenger, GSAT-30 is a telecommunications satellite designed and manufactured by ISRO. To be positioned at a longitude of 83 degrees East, it will provide high-quality television, telecommunications and broadcasting services over Indian mainland and Islands.

GSAT-30 is configured on ISRO’s enhanced I-3K platform to provide communications services from geostationary orbit in C- and Ku-band for a lifetime greater than 15 years.

By operating GSAT-30, ISRO will – once again – foster the use of space to help bridge the digital divide in the Indian subcontinent as part of its ambitious space program. These objectives are to develop India by focusing on all types of space applications, including navigation, Earth observation, telecommunications and broadcasts of educational programs, while pursuing science research and planetary exploration.

For more than 30 years, France and India have developed exemplary cooperation in the space field.

Since the launch of India’s APPLE experimental satellite on Ariane Flight L03 in 1981, Arianespace has orbited 23 satellites and signed 24 launch contracts with the Indian space agency.

The orbiting of GSAT-30 marks another demonstration of the strong bond uniting Europe and India in space cooperation.

GSAT-30 will replace the Insat 4A satellite in orbit.