A meeting conducted in the beginning of this month in London, which was the fourth, of its kind, and the seventh in the roundtable series revealed during the GVF Roundtable “High Throughput Satellite 2016 - Enabling a Brave New World of Opportunity” showed that what will be rolled out in the next gen services will be determined by the answers to two key questions: “What is the A… B… C… of Growth?” and “When will the new flat panel antenna technology be ready?”

Opening the Roundtable with ‘The Consultants, Setting the HTS Context’, industry experts Chris Baugh, President, NSR, and Stéphane Chenard, Senior Associate Consultant, Euroconsult, provided their respective in-depth analyses, the complete details of which are available for PDF download at.

The December 6th event also features an annual program in Washington DC. Attended by almost 120 representatives of the satellite industry and end-user communities, together with leading consultants, the European Space Agency, the UK’s Satellite Applications Catapult, and others, the event was sponsored by Inmarsat, Hughes, SES, iDirect, Advantech Wireless, Intelsat, and C-COM Satellite Systems. 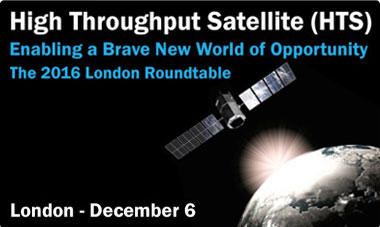 Mr Baugh’s analysis illustrated that whilst over the period 2016-2025 the number of in-orbit communications satellites is projected to be fairly constant at around +/- 8 percent of the 2016 total, this more-or-less constant volume of orbital assets will feature the progressive replacement of end-of-life FSS (fixed satellite service) spacecraft with hybrid and HTS (high throughput satellites), such that by 2025 there will be a 318 percentage point growth in the number of hybrid and HTS compared to the current number.

Martin Jarrold, Chief of International Program Development with GVF commented regarding other key points made by Mr Baugh, “The NSR analysis shows that amongst the many advantages that HTS brings over traditional FSS satellites one advantage is a considerable reduction in the average cost per Gbps (gigabit per second) of bandwidth in orbit. Mr Baugh’s analysis of the period 2010-2020 reveals figures of US$98.48 million for FSS satellites, US$25.23 million for hybrid satellites, and US$12.22 million for HTS spacecraft.”

Mr Jarrold continued, “Most noteworthy amongst many key points in the NSR presentation was the pointer to what was described as the A… B… C… of growth, with Aeronautical, Backhaul & Consumer Broadband pointed-out as key applications stimulating continued HTS market expansion, although, very significantly, a 22 times growth in demand for HTS capacity over the period 2015-2025 will yield only a quadrupling of HTS revenues.”

The NSR analysis also pointed to the issue of developments in the expanding electronically steerable flat panel antenna (FPA) ecosystem – developments in turn driven by the demands of the commercial land mobile, maritime, and aeronautical verticals – which are key to a bigger overall, HTS-based, solutions marketplace.

Mr Chenard set-out a number of demand scenarios for key satellite markets which indicated that for Consumer Broadband HTS solutions offering 100+ Mbps (megabits per second) & 10+ GB (gigabytes) per month may unlock some markets. In respect of the Mobility ecosystem, he said more and more airlines clearly want aeronautical VSAT solutions for in-flight entertainment and connectivity, but also noted that their long-term return on this investment remains uncertain, and that the promised FPAs are urgently needed to make mobile terminals easier to adopt. In the TV market, transponder usage increased by 4.5 percent in 2015, and whilst 60 percent of 3,000 new broadcast channels were high-definition this did not significantly impact on the high throughput satellite ecosystem.

Turning to other key points arising from the event, Roundtable Chairman David Hartshorn said, “It is noteworthy that the dialogue addressed what may be described as value-chain re-invention, bringing significant changes to the valued added reseller (VAR) marketplace, and changes that will continue to impact on the nature of the accelerating transition to HTS.