SpaceX Launches SES-9... Perfect Rocket Launch... Not So Much For The Return Trip 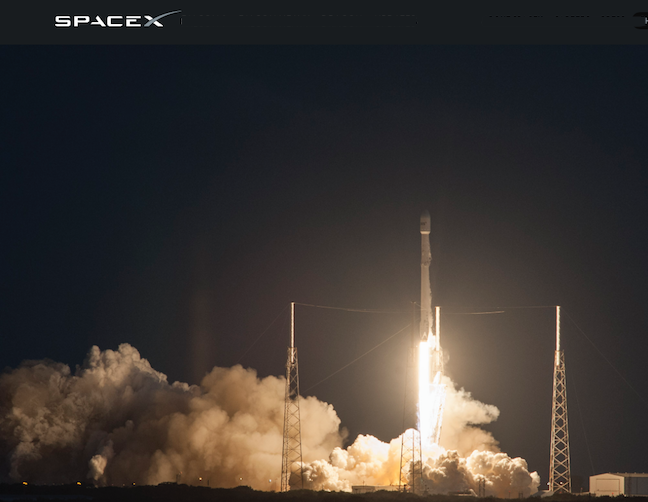 SES-9 uses a chemical bi-propellant thruster to conduct major post-launch maneuvers, completing its journey to its orbit at 36,000 kilometers above the Equator with an electric propulsion system. The on-orbit maneuvering throughout the 15 year nominal lifetime of the satellite will be done entirely by electric propulsion. SES-9 is planned to commence its services in the third quarter of this year.

SES-9 is SES’s largest satellite to serve the Asia-Pacific region. It weighed 5.3 tonnes at the launch and has 57 high-power Ku-band transponders – equivalent to 81x36 MHz transponders’ It thus provides significant expansion capacity to serve the buoyant and fast-growing video, enterprise, mobility and government sectors across Northeast Asia, South Asia, India, Indonesia and the Philippines. SES-9 will be co-located with another SES satellite, SES-7, at the prime orbital location of 108.2 degrees East, and will replace the NSS-11 spacecraft at that position. SES-9 was built by Boeing Satellite Systems International.

This was SpaceX's fourth attempt to land the Falcon 9 post-launch on an autonomous drone ship floating in the ocean. All of the previous sea landings have failed, though the third attempt came very close. The company wasn't expecting a successful landing from the start of this mission, since the rocket had to send a heavy satellite into a high orbit, which demands a great deal of fuel for the launch, not leaving much fuel left for the rocket's return to Earth and powered landing.

@elonmusk if at first you don't land the rocket, try try again.

“SES-9 is an important building block in our strategy to grow in dynamic regions and four prime sectors—video, enterprise, mobility and government,” said Martin Halliwell, Chief Technology Officer of SES. “Co-located with SES-7, the new satellite will reach 22 million TV homes and is designed to deliver high-performing connectivity to homes, enterprises and institutions across Asia. With its dedicated mobility beams, it will help us to capture new opportunities in the buoyant markets for maritime and aeronautical connectivity. The successful launch of SES-9 also takes us an important step further in our excellent relationship with SpaceX as a launch provider of growing importance, and is further proof of SpaceX’s professionalism and impressive performance. I congratulate the SpaceX and SES teams, who together have done an excellent job.”

On 4 Mar 2016, SES launched SES-9, its largest satellite dedicated to serving the Asia-Pacific region. SES-9, with its payload of 81 high-powered Ku-band transponder equivalents, will be the 7th SES satellite providing unparalleled coverage to over 20 countries in the region.

SES-9 will provide expansion and replacement capacity to serve the Pay-TV, data and mobility sectors in fast-growing markets across Northeast Asia, South Asia and Indonesia.

The additional capacity on SES-9 will enable DTH operators to broadcast more local content and increase their SD and HDTV channel line-up to 22 million households across Asia-Pacific, in markets such as India, Indonesia and the Philippines.

SES-9 will also deliver high-speed broadband services and mobile backhaul to remote regions to enable the deployment of communication networks, such as banking and e-government services.

In addition, SES-9 is well-equipped to meet the demand for maritime connectivity with its dedicated mobility beams, which will provide comprehensive coverage for the 26,000 vessels[1] expected to sail worldwide on high-traffic maritime routes in 2016, such as between the Suez Canal and Strait of Malacca.

The satellite’s Indian Ocean and South East Asian coverage is ideal for providing seamless in-flight connectivity for domestic Asian flights operating in countries like Indonesia and the Philippines. With 3.8 billion[2] people expected to fly globally in 2016, SES-9 mobility beams will help to meet part of the increasing demand for in-flight connectivity from airline passengers.

SES-9 will be co-located with another SES-owned satellite, SES-7, at the prime orbital location of 108.2°E. Co-location further improves the levels of reliability and security for customers of both satellites.

SES-9 was built by Boeing Satellite Systems International and is designed to operate for 15 years in geostationary orbit. It features a 12.7-kilowatt payload and 57 high-power Ku-band transponders (equivalent to 81 × 36 MHz transponders).

SES-9 has a dry mass of 2,835 kg and a wet mass of 5,271 kg (includes dry mass and propellant for both chemical/electric propulsion). It has a wingspan of 48m and has two solar wings with six solar array panels on each wing.

SES has maintained its regional headquarters in Singapore since 1999. The company's core business is the provision of satellite capacity for clients in the broadcast, enterpise, maritime & aeronautical as well as governmnet sectors through its constellation of over 50 geostationary satellites. This is further supported by a constellation of 12 satellites in medium earth orbit from O3b Networks, in which SES holds a significant stake.

Of the seven satellites in its current launch programme spanning 2016 and 2017, two, including SES-9, are dedicated to serving the Asia-Pacific region. These satellites will serve the rapidly growing aeronautical and maritime mobile connectivity sectors, as well as DTH broadcasters.

Today, SES leads the direct-to-home (DTH) market in the Asia-Pacific region. It carries the highest number of pay DTH channels (1,000 channels), reaching over 44 million homes and 160 million viewers in the region—more than any other satellite operator.