[SatNews] However, currently CubeSats have limited three-axis stabilization and do not provide adequate maneuverability, or pointing, to meet mission requirements.

A new attitude system developed by the Air Force and a small business offers improved capabilities for small space research satellites.  The all-in-one unit provides satellite control and orientation capability and is ultimately expected to result in a low-cost platform for missions and rapid launches. 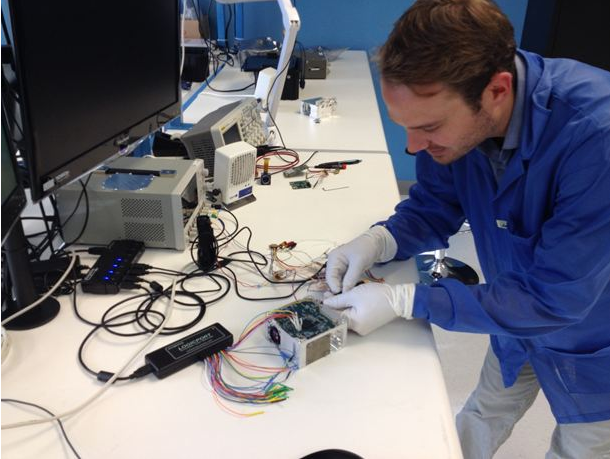 Blue Canyon Technologies employee Matthew Carton works on the eXact Attitude Control Technology (XACT) at their facility in Boulder, Colorado. XACT is an all-in-one unit provides satellite control and orientation capability and is ultimately expected to result in a low-cost platform for missions and rapid launches. (Courtesy photo)

The eXact Attitude Control Technology (XACT) is an attitude determination and control system (ADCS), which was developed with funding from the Air Force Small Business Innovation Research (SBIR) program.

The technology has already been integrated into a number of new missions by a wide range of organizations, including Raytheon’s SeeMe program, which uses small satellites to give soldiers a birds-eye view of the battlefield, and NASA’s INSPIRE student internship program.  AFRL is also using the system on upcoming Cube Sat (mini satellite) missions this fall as part of a university research program mission and on a NASA mission in 2015.

“The key to this product’s success has been the timing in creating something that fit the current needs of the market,” said George Stafford, BCT’s president.

“BCT has been fortunate to have the opportunity to work with the Air Force SBIR program at AFRL,” Stafford added.  “This partnership has provided invaluable support for our company as we have developed this new type of spacecraft attitude control system for CubeSats.  Our successful transition from start-up to thriving small business has been in large part due to the opportunity that the SBIR program has provided.  We believe that our products our now filling an important need for the Air Force and will hopefully lead to many successful CubeSat missions.”

During a SBIR solicitation, the Air Force requested an innovative means for providing an all-in-one, packaged ADCS for miniaturized space research satellites, or CubeSats, to meet research and development experiment-pointing requirements.  CubeSat units, 10x10x10 cm cubes, are quickly becoming an ideal platform for hosting a number of new mission applications.

However, currently CubeSats have limited three-axis stabilization and do not provide adequate maneuverability, or pointing, to meet mission requirements.  As a result, programs that could use CubeSats to conduct their mission are forced to acquire rides or purchase larger satellites, which provide better pointing accuracy. 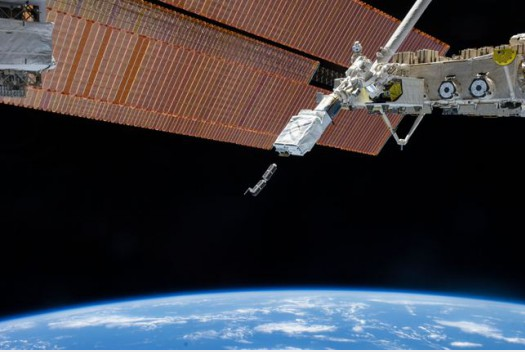 Miniature satellites, called CubeSats, are deployed from a much larger satellite. (Photo courtesy of NASA/Released)

Therefore, the Air Force wanted to develop a ADCS capability for the CubeSats that met the goal of a 0.2 degree pointing ability while offering a low-cost platform for new missions and more rapid launch opportunities.

“XACT is a relative inexpensive when compared to the cost for larger satellites,” said Capt. Tae Kim, the AFRL engineer who managed the program.

“It is easier to find launch opportunities for CubeSats than larger satellites due to their small size and weight; they can piggyback on existing launches.”

BCT’s objective was to provide a prototype XACT that was half the size of CubeSat unit, which would provide 0.2 degree or better pointing accuracy for a three-unit CubeSat, with a maximum weight of eight kilograms.  The resulting XACT system is a reliable CubeSat ADCS that is compatible with the current miniature satellites for a variety of mission configurations.

This Air Force SBIR project resulted in the development of a line of products by BCT that are in demand in the small satellite spacecraft market.  BCT has leveraged this demand into revenue growth over $750,000 in 2013.  The company expects continued growth over the next two years, projecting $2.5 million in 2014 alone, which will allow the company to increase their staff and expand their facilities.

This and more information is available at http://science.dodlive.mil/2014/08/07/the-air-force-the-mini-space-satellites/ by jtozer.