[SatNews] XCOR Aerospace, Inc. announced today that it has bonded the XCOR Lynx Mark I strakes to the Lynx spacecraft fuselage. Lynx Mark I is currently being assembled at XCOR's Hangar 61 in Mojave, California. 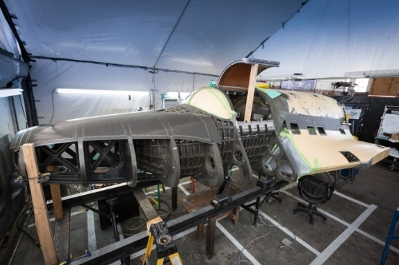 The Lynx Mark I manned suborbital spacecraft under construction at XCOR Aerospace in Mojave, California. XCOR announced today the bonding of the strakes on to the vehicle, a major milestone in completing the craft. Credit: Mike Massee / XCOR

Integrating the strakes to the Lynx Mk I was a critical step, noted XCOR President and Chief Executive Officer Jay Gibson. "Today marks another solid milestone in our progress toward first flight, clearing the path for a series of important moments that will accelerate Lynx development," he added.

With the strakes bonded to Lynx, "we have an open path toward the integration of a number of subsystems, and this means we will now start electrical wiring, plumbing, installing the control system, and populating the landing gear bays," added Chief Technology Officer Jeff Greason.

The strakes make up a large portion of the Lynx aerodynamic shell. Each strake is partitioned into four independent fuel tanks that are pressurized during flight and supply kerosene to the Lynx engines. Each strake also houses a main landing gear assembly and two reaction control thrusters that the Lynx will use to make attitude adjustments while outside of the atmosphere.