Thirty-Eight Smallsats Set for Orbital Assignments from Cygnus and ISS 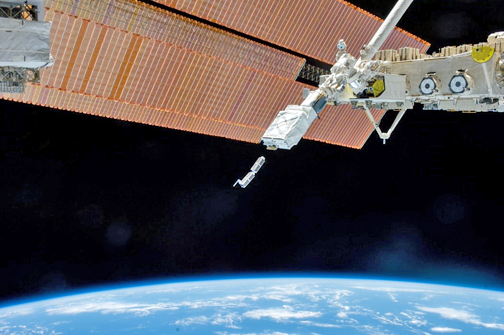 Smallsat launching from the International Space Station. Photo is courtesy of NASA.

Aboard the Orbital ATK Cygnus flight to the ISS, following a successful launch by a United Launch Alliance Atlas V rocket, were 38 smallsats, all meeting the manufacturing size requirements for CubeSats. Twenty-eight of these satellites ad part of the QB50 mission that is funded by the European Commission (EC) and managed by the von Karman Institute for Fluid Dynamics, with NanoRacks being the launch provider. — these smallsats included…

Canada
Ex-Alta 1 from the University of Alberta, designed to measure conditions in Earth’s magnetic field, carries a Multi-Needle Langmuir Probe (m-NLP) as a payload.

Finland
The nation's first satellite, the Aalto-2, is hosting a m-NLP probe.

Greece
UPSat and DUTHSat, with UPSat being the first one to be based on open-sources software. The first satellite was built by the University of Patras and the Libre Space Foundation and the second one by the University of Thrace. Both satellites carry a Multi-Needle Langmuir Probe (m-NLP).

South Africa
nSight-1 and ZA-AEROSAT from SCS-Space and Stellenbosch University with FIPEX payloads.

South Korea
Three smallsats. Seoul National University’s SNUSAT-1 and SNUSAT-1b packing FIPEX payloads, with the Korea Advanced Institute of Science and Technology (KAIST) including their Little Intelligent Nanosatellite of KAIST (LINK) which is equipped with an INMS  payload.

Sweden
Lula University of Technology and partner Open Cosmos of England with their qbee50-LTU-OC smallsat with FIPEX payload.

Turkey
Istanbul Technical University and Halvesan (a defence contractor in that nation owned by the government) with their BeEagleSat and HAVELSAT smallsats, both with m-NLP payloads.

California State University at Northridge
The Northridge Satellite 1, AKA CSUNSAT-1, to test a new power system that doesn’t require radiators.

NASA
Included aboard Cygnus is the agency’s Educational Launch of Nanosatellites, known as the ELaNa program, with this bevy of satellites including IceCube (also known as Earth 1) from the Goddard Space Flight Center, which will be testing a new radiometer for cloud observations from orbit. A second NASA smallsat remains unidentified as of this writing.

University of Colorado
Challenger with an INMS payload.

University of Michigan
Atlantis with a FIPEX payload.