On Thursday, satellite service provider Intelsat announced that one of its communications satellites is now completely lost in orbit above Earth, rendering the vehicle an unmovable piece of space debris. Intelsat says that something damaged the satellite, causing its onboard propellant to leak out into space. Now, without the ability to maneuver and communicate, the satellite could pose a potential threat to other vehicles in the same orbit. 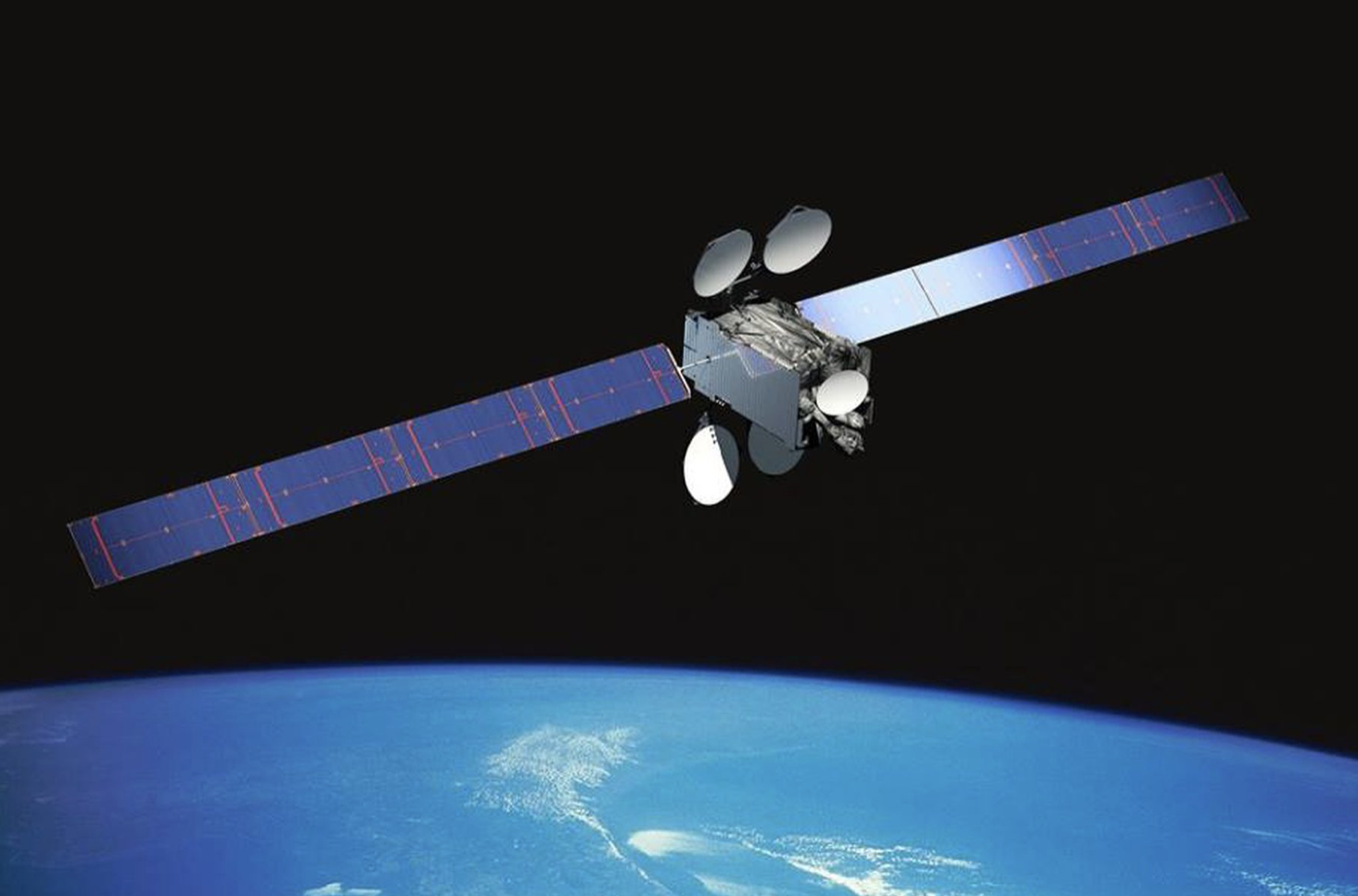 An artistic rendering of Intelsat 29e in orbit Image: Intelsat

For Intelsat, the most obvious consequence of the loss is a financial one. Built by Boeing, the satellite, called Intelsat 29e, cost between $400 and $450 million and was supposed to operate up to 15 years in space. But now its lifetime has been cut short after just three years in orbit, preventing Intelsat from receiving any planned revenue from the spacecraft’s communications coverage over North and South America.

But the now-dead satellite is also a liability for other satellites that are on a similar trajectory. The spacecraft’s orbit is a high one above Earth known as geostationary orbit, or GEO — a path above the equator where satellites match the eastward rotation of the planet. That means they essentially “hover” over the same patch of the Earth at all times. It’s a popular spot to deposit communications and surveillance satellites because they just sit in one location of the sky for years.

The problem with this orbit, though, is it’s incredibly high up — around 22,000 miles above the planet’s surface. Satellites in this orbit are less affected by the Earth’s atmosphere and aren’t dragged down as easily as satellites in lower orbits. So if a satellite fails in this orbit, like Intelsat 29e did, it’s basically stuck up there for hundreds of years and won’t be coming down. Because of the damage Intelsat 29e sustained, the satellite is now slightly off track on this orbit, which means it could cross paths with other GEO satellites in the years to come. That means there’s a chance of future collisions that could cause even more debris.

“It’s a big problem, because now basically you have a floating bomb in GEO,” Jonathan McDowell, an astrophysicist at Harvard and spaceflight tracker, tells The Verge.

It’s unclear exactly what caused the damage to Intelsat 29e. Intelsat says it is working with Boeing to determine if something like space debris is to blame or if the damage was caused from something on the satellite itself. Whatever happened occurred on April 7th, which is when customers stopped receiving communication from the satellite. Video footage from a company called ExoAnalytic Solutions showed the satellite’s propellant leaking into space. Intelsat also clarified that a second failure occurred during efforts to recover the vehicle, resulting in the total loss of the satellite.

Now, Intelsat 29e is moving slightly faster than it would be if it was in its proper geostationary orbit, Intelsat confirms. The satellite now takes less than 23 hours and 56 minutes to complete one rotation around Earth, the normal time for most other operational geostationary satellites. “All the other GEO satellites are keeping pace with the Earth,” says McDowell. “So every day or so it’s going to move past another few satellites.” 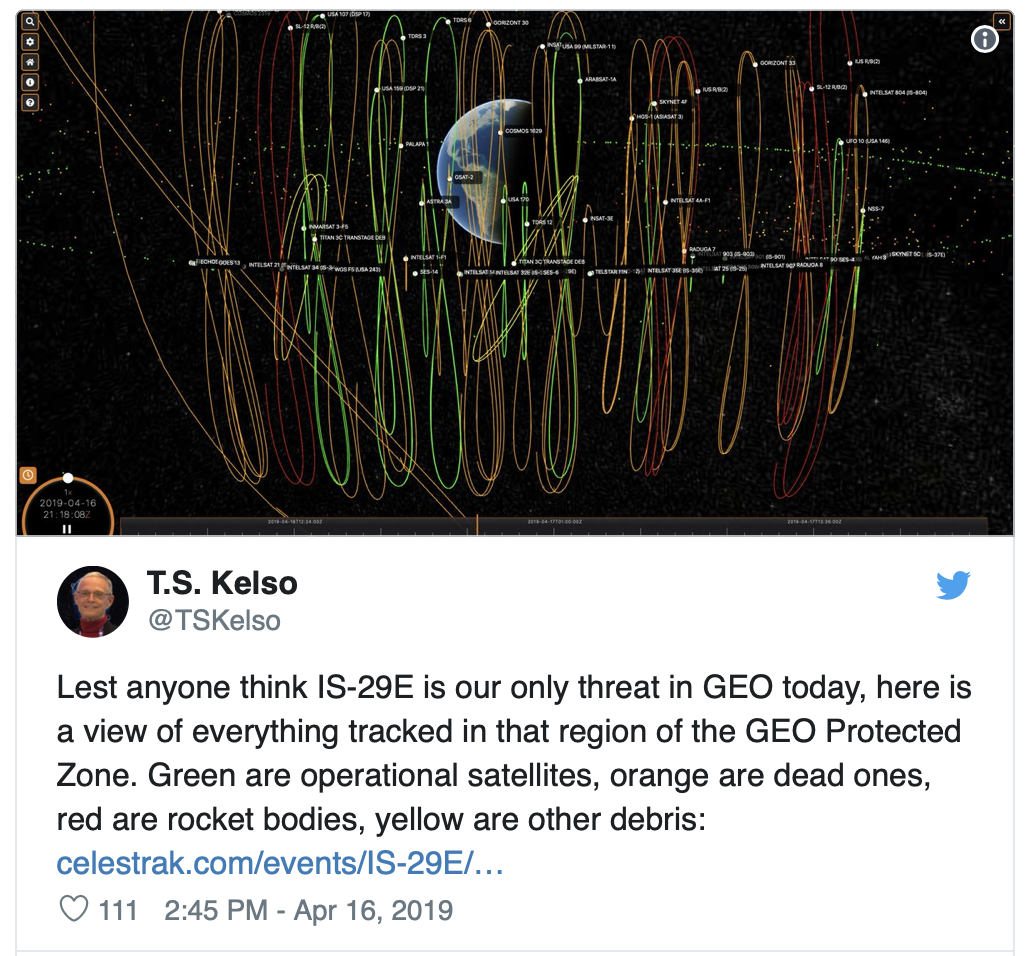 Additionally, the satellite’s orbit is now slightly more elliptical than it used to be, so it’s moving in and out from the Earth by around 160 miles, McDowell says. Intelsat confirmed that the orbit is more elliptical now. Most of the other satellites in geostationary orbit are in a fairly circular path. So not only is Intelsat 29e moving slightly faster than everything else, but it’s also weaving in and out of the orbit much more wildly.

It’s likely this orbit will get even more different over time, too, as the satellite is still drifting and gravity from the Sun and the Moon will tug on the spacecraft. Plus, if there is still fuel leftover in the spacecraft, the fluid could continue to vent out into space, causing more orbital changes. And without any way to maneuver the satellite, there’s nothing to be done. Intelsat 29e is now at the mercy of the space environment.

Fortunately, Intelsat 29e is a rather large spacecraft, weighing more than 14,000 pounds, and it can be easily tracked by the US Space Surveillance Network, an array of telescopes operated by the US Department of Defense. Intelsat is also keeping a close eye on it, too, according to the company. So if the spacecraft comes too close to another operational satellite, the Air Force will send an alert and the operator can temporarily move the functioning vehicle while Intelsat 29e passes.

But it’s possible that there are still other tiny pieces of debris that broke off from Intelsat 29e during its weird failure that cannot be seen. If those pieces are smaller than a baseball, then the Space Surveillance Network won’t be able to pick them up because it’s beyond the system’s capabilities. And these objects can still cause damage if they run into a functioning satellite, since they’re moving at super high speeds in orbit. “Collisions are more likely to be on the order of hundreds of miles an hour,” says McDowell. “So more like a highway car crash.” Intelsat could not confirm to The Verge if there were any associated pieces of debris from the accident.

This isn’t exactly a new problem, though, as Intelsat 29e isn’t the only dead satellite in geostationary orbit. But this region of space is a very precious resource for the aerospace industry. It’s one of the go-to destinations for communication satellites, and if it becomes too cluttered with debris, it won’t be usable anymore. That’s why adding another drifting satellite into this arena is a big concern.

For now, there’s nothing to be done except keep tabs on Intelsat 29e and figure out what happened to it, so that it doesn’t happen again. In the meantime, if you have a satellite passing near Intelsat 29e, you may have to do some tricks to get it out of the way.