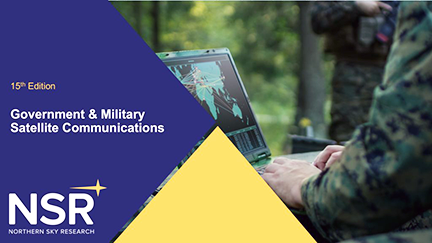 Geopolitics, acquisition reform, and expanded low-cost offerings from the commercial market, all point to expanded opportunities across all regions and applications.  With more than $71 billion in cumulative revenue expected by 2027, commercial suppliers to the MILSATCOM market stand to see sizable gains. 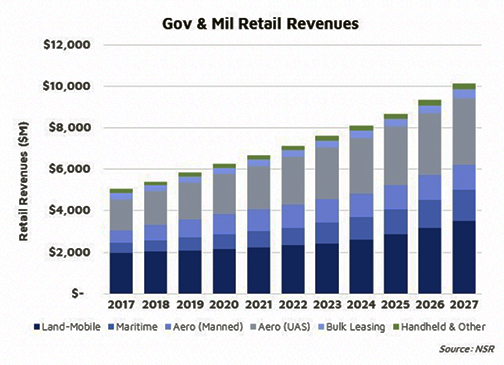 At slightly over $5 billion in revenues in 2017, up nearly $500 million from 2016, annual global MILSATCOM revenue will double over the next decade. Land-Mobile and UAS applications are the leading markets for Government and Military users, as they will generate over 64 percent of revenue.  Renewed interest in bulk leasing, and ongoing integration of commercial managed services into end-user networks, however, is being offset by challenges in terminal acquisition and expanding MILSATCOM capacity.

“Government and Military customers need more connectivity than ever before – from all orbits, and frequencies – and from both commercial and proprietary networks,” said report author and Senior Analyst, Brad Grady.  “The debate today isn’t entirely MILSATCOM vs. COMSATCOM, it’s about acquiring new, flexible terminals, and having a holistic view of the entire communications infrastructure.  This year, the focus has turned to the ‘how’ – how to implement acquisition reform, how to design robust and resilient communications infrastructure, and how to integrate commercial technologies within and alongside MILSATCOM networks.”

At over 21 Gbps of capacity demand across both FSS and HTS in 2017, increasing to more than 250 Gbps of satellite capacity by 2027, generating $10 billion in retail revenues for the satellite sector, the market is on a growth-trajectory.  Bottom line, despite several years of turbulence, there is a strong outlook for mil/gov satcom growth on the horizon.

NSR’s Government and Military Satellite Communications, 15th Edition, explores the market opportunities available to the satellite industry.  With over 15 years of insights and analysis, NSR’s longest-running report on the government & military satellite communications market provides an in-depth view of the drivers, regional trends, and capacity demand through 2027.