Arianespace will launch BSAT-4b, under the term of a turnkey contract between B-SAT and Maxar’s SSL.

BSAT-4b will be launched by an Ariane 5 in 2020 from the Guiana Space Center, Europe’s Spaceport in Kourou, French Guiana, as part of a turnkey contract between the Japanese satellite operator B-SAT and the California-based satellite manufacturer SSL. Since the creation of B-SAT, Arianespace has launched all nine of its satellites.

BSAT-4b will be the tenth satellite launched for B-SAT and the 32nd commercial geostationary satellite launch contract awarded to Arianespace in Japan. Built by SSL, a Maxar Technologies company, using a 1300 platform, BSAT-4b will feature 24 Ku-band transponders and will weigh about 3,520 kg. at launch and is designed to have a nominal service life of at least 15 years. The satellite will be positioned in geostationary orbit at 110 degrees East. 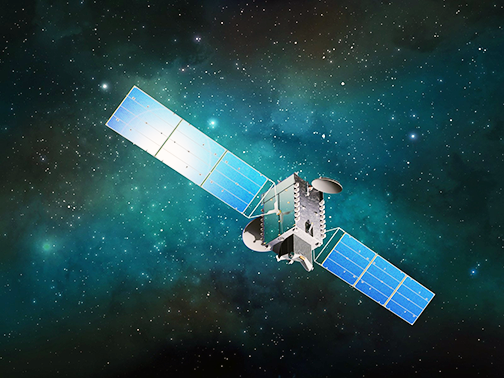 Artistic rendition of the BSAT-4b satellite.
Image is courtesy of SSL.

BSAT-4b will serve as a back-up of BSAT-4a, which was launched by Arianespace in September 2017. The satellite will have the same Japan archipelago footprint as BSAT-4a, providing Direct-To-Home (DTH) television to ensure exceptional 4K/8K ultra-high definition (UHD) video distribution for the 2020 Tokyo Olympic Games.

Following the signature of this contract, Stéphane Israël, CEO of Arianespace, said that only seven months after the successful launch of BSAT-4a in September 2017, Arianespace is honored to have been selected for the launch of BSAT-4b for long-lasting partner B-SAT. This new Ariane 5 launch contract is a clear demonstration of the excellent relationships between Arianespace, SSL and the Japanese operator B-SAT, for whom the company has launched the entire fleet of satellites since 1997.

Following the announcement of this new launch contract Arianespace has signed for the BSAT-4b satellite, along with two successful launches in the last seven months (orbiting BSAT-4a and DSN-1/Superbird-8), Arianespace is reaffirming its partnerships with key players in the Japanese space industry during the company’s annual Japan Week event in Tokyo.

The next two Japan-related missions on Arianespace’s agenda, slated for launch in the fourth quarter of 2018, are: BepiColombo, a program by the European Space Agency (ESA) in partnership with the Japan Space Exploration Agency (JAXA); and Horizons 3e, to be orbited for the operator SKY Perfect JSAT. In 32 years of operations in Japan, Arianespace has won 32 contracts from Japanese operators, which represents 75 percent of the country’s commercial geostationary satellites.

In addition to the 32 contracts, Arianespace was selected to launch two commercial satellites acquired jointly by Japanese and international operators: Horizons-2 (launched by an Ariane 5 in December 2007) and Horizons 3e (in the order book for a future mission), with these two satellites belonging to the Horizons joint venture owned by Intelsat and SKY Perfect JSAT.

The next Arianespace missions for Japanese operators will be: JCSAT-17 and Horizons 3e for SKY Perfect JSAT, and BSAT-4b for B-SAT.

BepiColombo, the ESA mission in partnership with JAXA to explore the planet Mercury, will be launched by Arianespace in October 2018.

Arianespace conducted 11 successful launches in 2017 from the Guiana Space Center (six by Ariane 5, two by Soyuz and three by Vega), orbiting a total of 20 satellites for commercial and institutional customers from around the world. With 12 satellites sent into geostationary transfer orbit (GTO), representing a total mass of 54 metric tons, Arianespace once again confirmed its leadership in the GTO launch market. Ariane 5 also set a new performance record, injecting 9.969 metric tons into GTO on a mission performed in June 2017.

In 2018, three launches have been completed from the Guiana Space Center: on January 25 with a heavy-lift Ariane 5; on March 9 with a medium-lift Soyuz rocket; and on April 5 with another Ariane 5. The next mission is planned for May 25, using an Ariane 5.

Arianespace’s order book stands at 4.7 billion euros, including 56 launches for 29 customers (70 percent commercial and 30 percent institutional, in terms of the number of launches), with 17 by Ariane 5, 28 by Soyuz, nine by Vega/Vega C and two by Ariane 6.

The development of Arianespace’s future launchers is proceeding according to the planned steps, with first launches planned as soon as 2019 for Vega C and 2020 for Ariane 6. Perfectly suited to the market opportunities offered by planned satellite constellations designed to offer global connectivity or Earth Observation (EO) services, Vega C and Ariane 6 won their first launch services contracts in 2017:

This trend should accelerate in 2018, particularly with the expected first commercial launch contracts for Ariane 6.

During his visit to Japan, Arianespace Chief Executive Officer Stéphane Israël said that following the successful launches of two satellites for BSAT, then for the Japanese Ministry of Defense and SKY Perfect JSAT in the last seven months, as well as the signature today of our 32nd contract in this country in 32 years, Arianespace is proud to carry on its exceptional partnership with Japan.