The launcher for Arianespace’s initial Vega flight of 2014 began its build-up this week at the Spaceport in French Guiana, marking the first step in a mission campaign that will lead to its orbiting of the DZZ-HR high-resolution observation satellite. 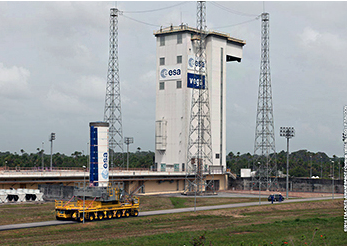 To initiate the activity, Vega’s P80 first stage was transferred yesterday from the Spaceport’s Booster Integration Building to the SLV launch zone. It was then positioned on the launch pad and protected by the mobile gantry.

This third Vega mission’s DZZ-HR payload is a 900-kg.-class satellite produced by Airbus Defence and Space for the Republic of Kazakhstan’s government.  Once in Sun-synchronous orbit, DZZ-HR will provide very-high-quality panchromatic and multispectral products for a wide range of applications, including cadastral surveys, management of natural resources, environmental monitoring and homeland surveillance.

Developed in a European Space Agency program led by Italy’s ASI space agency and industrial prime contractor ELV SpA., Vega was conceived for the orbiting of small- to medium-sized satellites, including institutional and scientific spacecraft.  The vehicle’s benchmark mission is for a 1,500-kg. payload lift performance into a 700 km. altitude circular orbit.

The first Vega launch (designated Flight VV01 in Arianespace’s numbering system) was a qualification mission performed in February 2012, carrying the LARES laser relativity satellite, a small ALMASat-1 technology microsatellite demonstrator, and seven CubeSats.   It was followed by Flight VV02 in May 2013, which orbited the Proba-V, VNREDSat-1 and ESTCube-1 satellites.