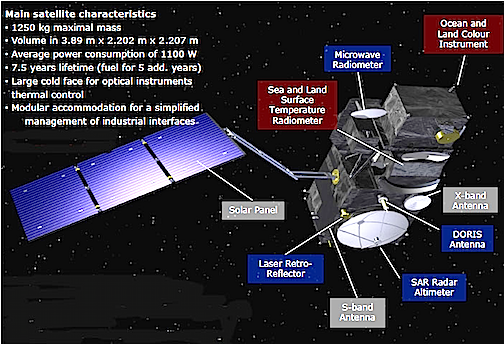 [Satnews] Following the successful completion of the Launch and Early Operations Phase of the Copernicus Sentinel-3A satellite by ESOC, EUMETSAT will start on Monday, February 22, to support in-orbit commissioning activities.

The in-orbit commissioning phase is essential to ensure that the satellite, instruments and the prime functions of the ground segment perform as expected, but will also prepare for the handover of the satellite from ESA to EUMETSAT, which is foreseen for July 2016. During this phase EUMETSAT will be increasingly involved in spacecraft operations led by ESOC and will start processing Sentinel-3A data at its Sentinel-3 Marine Center.

This phase will close in five months with the ESA In-Orbit Commissioning Review, where EUMETSAT will take over the responsibility for the control of the Sentinel-3A satellite and the operations of the payload data processing systems installed in its Sentinel-3 Marine Center.

The operations ramp-up phase will then run for another nine months, during which EUMETSAT will progressively increase the capacity of its Marine Center up to the level required for routine operations. During this phase, EUMETSAT will deliver Sentinel-3 sea surface temperature, ocean colour and ocean surface topography products of increasing maturity to users, capitalising on the calibration and validation programme established with ESA.

EUMETSAT will deliver, in real-time, Sentinel-3 marine data and products to the Copernicus Marine Environment Monitoring Service (CMEMS) and other users, together with additional marine products extracted from the observations of its own Meteosat and EPS/Metop missions, the cooperative Jason-3 mission and missions of its international partners (e.g. USA, China, India, Japan). This delivery will be done via EUMETCast, EUMETSAT’s satellite-based data broadcasting service, and the Sentinel-3 Online Data Access system.

Under the Copernicus data policy, all Sentinel-3 marine data and products will be available on a full, free and open basis to all users.

EUMETSAT operates the geostationary satellites Meteosat-8, -9, -10 and -11 over Europe and Africa, and Meteosat-7 over the Indian Ocean, and also operates two Metop polar-orbiting satellites as part of the Initial Joint Polar System (IJPS) shared with the US National Oceanic and Atmospheric Administration (NOAA).

EUMETSAT is also a partner in the cooperative high precision ocean altimetry Jason missions involving Europe and the United States (Jason-2, Jason-3 and Jason-CS/Sentinel-6). The data and products from EUMETSAT’s satellites are vital to weather forecasting and make a significant contribution to the monitoring of environment and climate change.

From 2016 onwards, EUMETSAT will exploit the Copernicus Sentinel-3 marine mission in cooperation with ESA and on behalf of the EU, and deliver data services to the Copernicus Marine Environment Monitoring Service.