[SatNews] ...an all-in-one satellite fleet management system with the ability to simultaneously control multiple satellites from different manufacturers from a single consolidated system. 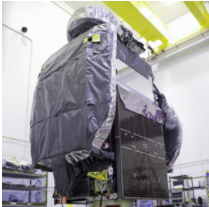 Scheduled for a first half 2016 launch, Thaicom 8 will have a total of 24 Ku-band transponders covering Thailand, South Asia and Africa and will serve customers’ needs for increased Ku-band capacity. Thaicom 8 is a GeoStar2 telecommunications satellite built by Orbital ATK. This will be the 16th Orbital ATK GeoStar satellite that Kratos ISI has supported.

Kratos ISI will deliver a complete satellite control system for Thaicom 8 based on Kratos’ EPOCH® command and control and OASYS® flight dynamics solutions, which are the flagship products of the EPOCH IPSTM Integrated Product Suite. EPOCH IPS is an all-in-one satellite fleet management system with the ability to simultaneously control multiple satellites from different manufacturers from a single consolidated system. EPOCH IPS presents a more efficient and economical alternative to costly stove-piped command and control systems and provides Thaicom a control platform that can scale to support any future satellite fleet expansion needs.

The TT&C station, provided by the Kratos ISI UK team, will be the primary TT&C Earth station for Thaicom 8 and will include an 11m C-Band turning head antenna with a monopulse tracking system and fully redundant RF system. The antenna offers continuous wide-angle steering combined with high-accuracy pointing and tracking from its precision drives system, while the RF system is fully frequency-agile. As such, the system will support both nominal on-station and emergency TT&C operations.

“We are very honored by the trust Thaicom has shown in the quality of our products and services as well as our ability to provide the end-to-end satellite ground system that will help ensure safe and efficient operations of the Thaicom 8 satellite,” said James Kramer, Senior Vice President at Kratos ISI. “It was an important milestone for Kratos ISI as we continue to support the Asian satellite market.”