NASA's Rosetta...Preparations To Parallel Park Alongside A Comet...First Communications To Earth...


[SatNews] "Never before has a spacecraft pulled up and parked next to a comet. That is what Rosetta will do, and we are delighted to play a part in such a historic mission of exploration."

Three NASA science instruments aboard the European Space Agency's (ESA) Rosetta spacecraft, which is set to become the first to orbit a comet and land a probe on its nucleus, are beginning observations and sending science data back to Earth. 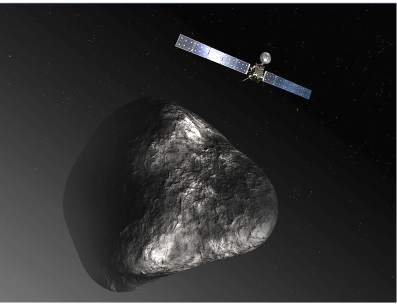 This artist's impression shows the Rosetta orbiter at comet 67P/Churyumov-Gerasimenko. The image is not to scale. Credit: ESA/ATG Medialab

Launched in March 2004, Rosetta was reactivated in January 2014 after a record 957 days in hibernation. Composed of an orbiter and lander, Rosetta's objective is to arrive at comet 67P/Churyumov-Gerasimenko in August to study the celestial object up close in unprecedented detail and prepare for landing a probe on the comet's nucleus in November.

Rosetta's lander will obtain the first images taken from a comet's surface and will provide the first analysis of a comet's composition by drilling into the surface. Rosetta also will be the first spacecraft to witness at close proximity how a comet changes as it is subjected to the increasing intensity of the sun's radiation. Observations will help scientists learn more about the origin and evolution of our solar system and the role comets may have played in seeding Earth with water, and perhaps even life.

"We are happy to be seeing some real zeroes and ones coming down from our instruments, and cannot wait to figure out what they are telling us," said Claudia Alexander, Rosetta's U.S. project scientist at NASA's Jet Propulsion Laboratory in Pasadena, California. "Never before has a spacecraft pulled up and parked next to a comet. That is what Rosetta will do, and we are delighted to play a part in such a historic mission of exploration."

Rosetta currently is approaching the main asteroid belt located between Jupiter and Mars. The spacecraft is still about 300,000 miles (500,000 kilometers) from the comet, but in August the instruments will begin to map its surface.

MIRO is designed to provide data on how gas and dust leave the surface of the nucleus to form the coma and tail that gives comets their intrinsic beauty. Studying the surface temperature and evolution of the coma and tail provides information on how the comet evolves as it approaches and leaves the vicinity of the sun.

Alice will analyze gases in the comet's coma, which is the bright envelope of gas around the nucleus of the comet developed as a comet approaches the sun. Alice also will measure the rate at which the comet produces water, carbon monoxide and carbon dioxide. These measurements will provide valuable information about the surface composition of the nucleus.

The instrument also will measure the amount of argon present, an important clue about the temperature of the solar system at the time the comet's nucleus originally formed more than 4.6 billion years ago.

IES is part of a suite of five instruments to analyze the plasma environment of the comet, particularly the coma. The instrument will measure the charged particles in the sun's outer atmosphere, or solar wind, as they interact with the gas flowing out from the comet while Rosetta is drawing nearer to the comet's nucleus.

NASA also provided part of the electronics package for the Double Focusing Mass Spectrometer, which is part of the Swiss-built Rosetta Orbiter Spectrometer for Ion and Neutral Analysis (ROSINA) instrument. ROSINA will be the first instrument in space with sufficient resolution to be able to distinguish between molecular nitrogen and carbon monoxide, two molecules with approximately the same mass. Clear identification of nitrogen will help scientists understand conditions at the time the solar system was formed.

U.S. scientists are partnering on several non-U.S. instruments and are involved in seven of the mission's 21 instrument collaborations. NASA's Deep Space Network is supporting ESA's Ground Station Network for spacecraft tracking and navigation.

Rosetta is an ESA mission with contributions from its member states and NASA. Rosetta's Philae lander is provided by a consortium led by the German Aerospace Center, Cologne; Max Planck Institute for Solar System Research, Gottigen; French National Space Agency, Paris; and the Italian Space Agency, Rome. JPL, a division of the California Institute of Technology, Pasadena, manages the U.S. contribution of the Rosetta mission for NASA's Science Mission Directorate in Washington. JPL also built the MIRO and hosts its principal investigator, Samuel Gulkis. The Southwest Research Institute (San Antonio and Boulder), developed the Rosetta orbiter's IES and Alice instruments, and hosts their principal investigators, James Burch (IES) and Alan Stern (Alice). For more information on the U.S. instruments aboard Rosetta, visit.

More information about Rosetta is available at.

For more information on the DSN, visit.