How This NASA Telescope is Defending the Earth From Asteroids


With rogue asteroids and comets on the move, space can sometimes be a bit of a warzone.

Serious impacts with Earth are few and far between. But these collisions can be catastrophic (just ask a few disgruntled dinosaurs circa 66 million years ago)—and Earthlings are often caught unaware.

That’s why a team of NASA astronomers has spent the past five years scouring the skies for near-Earth objects (NEOs)—asteroids and comets that orbit the Sun in our vicinity—in the hopes of potentially staving off impending doom.

“If we find an object only a few days from impact, it greatly limits our choices,” NASA astronomer Amy Mainzer said in a statement. “We've focused on finding NEOs when they are further away from Earth, providing the maximum amount of time and opening up a wider range of mitigation possibilities.” 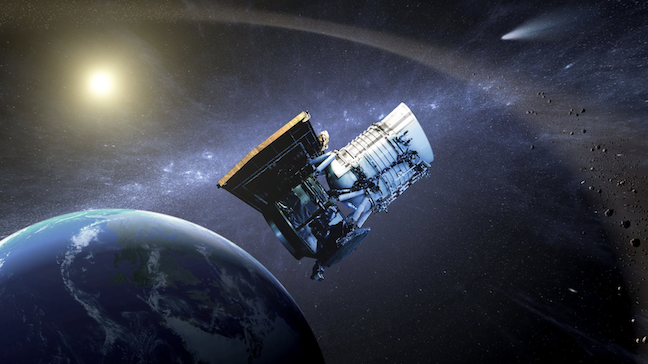 An artist's conception of the Wide-field Infrared Survey Explorer, or WISE spacecraft, in its orbit around Earth, which has now been repurposed into NEOWISE. NEOWISE has been scouring the skies for near-Earth objects for the past five years. Image Credit: NASA/JPL-Caltech

The endeavor is a part of NASA’s Near-Earth Object Wide-field Infrared Survey Explorer (NEOWISE) mission, an Earth-orbiting satellite equipped with cameras and an infrared-sensitive telescope. And the spacecraft, which isn’t limited to tracking the trajectories of asteroids, has kept itself busy: In the past half decade, it has recorded more than 95 billion measurements of asteroids, comets, stars, and galaxies, with data collection ongoing.

These measurements have revealed more than 1,000 wayfaring asteroids near our planet in the past half decade. None of these NEOs currently pose any threat to us here on Earth. But according to NASA estimates, about 20,000 near-Earth objects have flitted in and out of our neighborhood in recent decades—almost 900 of which were more than 3,200 feet across. And it was only six years ago that a meteor just 66 feet in diameter injured over 1,500 people when it exploded over the Russian region of Chelyabinsk.

Detecting rocky interlopers, however, is no easy task. Because NEOs are often so small and far away, they’re frustratingly hard to spot under even the best of circumstances. What’s more, under visible light, these objects can look as dark as coal or printer toner, making them hard to pick out against the black backdrop of space.

But the NEOWISE telescope has found a clever workaround—one that essentially involves it donning a set of cosmic night vision goggles. Heated by the warmth of the Sun, rocky bodies near Earth emit an infrared glow. By working in infrared, the telescope can pick up on any objects that are comin’ in hot, providing Mainzer’s team with images that reveal properties like a NEO’s size, mass, and composition. These measurements could someday help engineers calculate the amount of energy neededfor a spacecraft to “nudge” (or detonate) a looming asteroid off an Earthbound path.

The NEOWISE spacecraft, which was initially launched for a separate mission in 2009, will eventually reach the end of its tenure when its changing orbit prevents it from acquiring high-quality data. But a plan is already in the works to succeed it with another telescope called NEOCam—a new and improved addition to the NEO suite that will purposefully be designed to peer into space for asteroids.

If funded, NEOCam will “do a much more comprehensive job of mapping asteroid locations and measuring their sizes,” Mainzer said in the statement.

NEOCam’s fate hasn’t yet been decided. For now, its predecessor remains on the frontlines of defense, and will still be actively collecting data. So for any asteroids, comets, or meteors headed our way, the message is clear: Earth has plans to take the heat—and it starts with taking note of it.