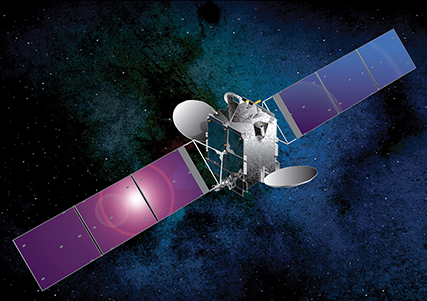 Optus 10 is a Fixed Satellite Services (FSS) spacecraft being built for Australian telecommunications service provider Optus. Optus 10 will be the tenth satellite in the Optus fleet and the second in the fleet to be built by SSL. It has been designed with 24 Ku-band transponders, demonstrating the flexibility of the 1300 satellite platform to accommodate missions requiring smaller satellite payloads. The satellite is scheduled for launch in 2014.

[SatNews] ...built with the flexibility to augment the Optus fleet and assure the highest level of ongoing service where it is needed the most.

Space Systems/Loral (SSL), provider of commercial satellites,  announced that the Optus 10 satellite, designed and built for Optus, has arrived at the European Spaceport in Kourou, French Guiana, where it will be launched aboard an Ariane 5 launch vehicle by Arianespace.

“Optus 10 has successfully completed all integration and test activities at the SSL factory and was shipped to launch base yesterday,” said John Celli, president of SSL. “Our collaboration with the Optus satellite team has been excellent and we are pleased to provide a highly flexible satellite that will enhance the Optus satellite business.”

The satellite was built with the flexibility to augment the Optus fleet and assure the highest level of ongoing service where it is needed the most.  Based on the highly reliable SSL 1300 platform, which supports a broad range of applications and technology advances, the satellite is designed to provide service for 15 years or more.

For almost 30 years, Optus has been the leader and innovator in satellite-based communications services within Australia and New Zealand, providing a comprehensive range of advanced satellite services. With the largest fleet of domestic satellites in that region, Optus delivers satellite including subscription-TV, free-to-air TV, radio, Internet, voice, and data services.

SSL's history includes delivering satellites and spacecraft systems for commercial and government customers around the world. As a  provider of commercial satellites, the company works closely with satellite operators to provide spacecraft for a broad range of services including television and radio distribution, digital audio radio, broadband Internet, mobile communications, and Earth observation. Billions of people around the world depend on SSL satellites every day. For more information, visit.

As the world's reference for heavy-lift launchers, Ariane 5 carries payloads weighing more than 10 metric tons to geostationary transfer orbit (GTO) and over 20 metric tons into low-Earth orbit (LEO) – with a high degree of accuracy mission after mission.

This performance ensures that Ariane 5 will be able to loft the heaviest spacecraft in production or on the drawing boards, and enables Arianespace to match up most telecommunications satellites for highly efficient dual launches – a capability that has been proven by the company in Ariane missions since the 1980s.

Arianespace operates two versions of the Ariane 5, ensuring high-quality vehicles that are standardized and repeatable in production, and delivered ready for launch.