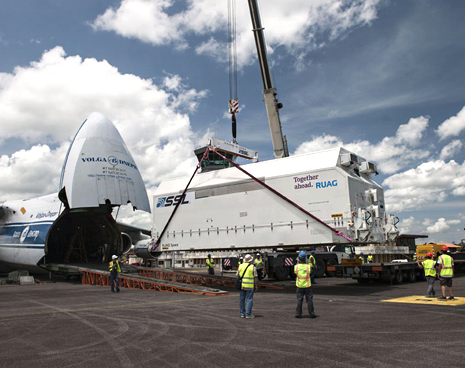 One of Ariane 5’s two solid propellant boosters rolls out for mating with the core stage in the photo at left, while at right DIRECTV-14 – enclosed in a protective shipping container – is unloaded from the An-124 cargo jetliner following its delivery to French Guiana 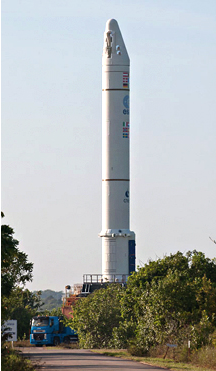 [SatNews] Two successful milestones completed in preparation for a launch.

Preparations for Arianespace’s sixth Ariane 5 mission in 2014 are gearing up with two separate milestones marked this week in French Guiana: arrival of one of the flight’s two satellite passengers – DIRECTV-14 – and the assembly start-up for its heavy-lift launcher.

The DIRECTV-14 spacecraft,  which was built by SSL (Space Systems/Loral) for operator DIRECTV, was transported by a chartered An-124 cargo jetliner that landed at Félix Eboué International Airport near the capital city of Cayenne, then unloaded for its transfer by road to the Spaceport.

Based on SSL’s 1300-series platform, this high-capacity satellite is to strengthen DIRECTV’s direct-to-home (DTH) digital entertainment services across the United States and Puerto Rico. 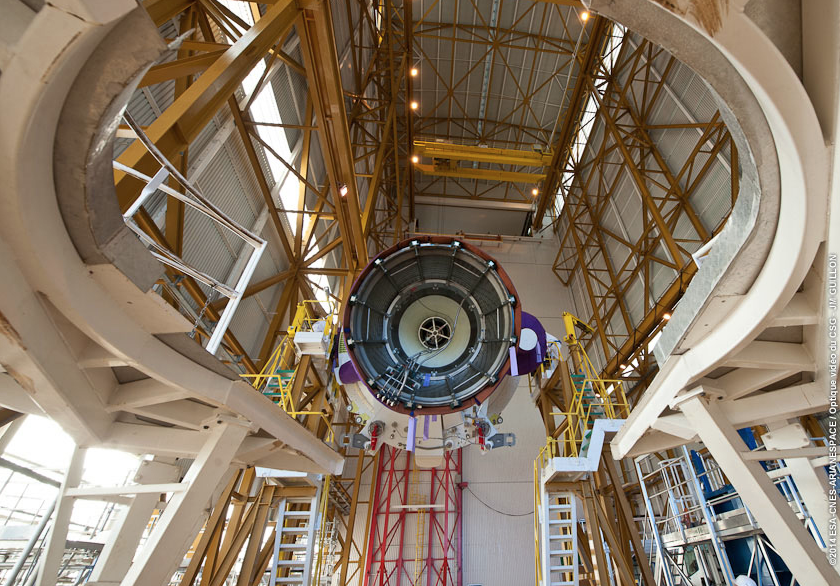 The Ariane 5 cryogenic core stage for Flight VA221 is readied to be raised into position over its mobile launch table to initiate the build-up activity.

In parallel activity, the mission’s Ariane 5 is coming together as initial build-up procedures involving this workhorse vehicle are performed in French Guiana.

Located inside the Spaceport’s Launcher Integration Building, the Ariane 5 began taking shape during a multi-step process with positioning of the vehicle’s cryogenic core stage over its mobile launch table, followed by integration of the two solid propellant boosters.

The mission is designated Flight VA221 in Arianespace’s numbering system, on which DIRECT-14 will be joined by its co-passenger: the Indian Space Research Organisation’s (ISRO) GSAT-16 telecommunications satellite.