[SatNews] Liftoff of Arianespace’s Ariane 5 with DirecTV-15 and SKY México-1. 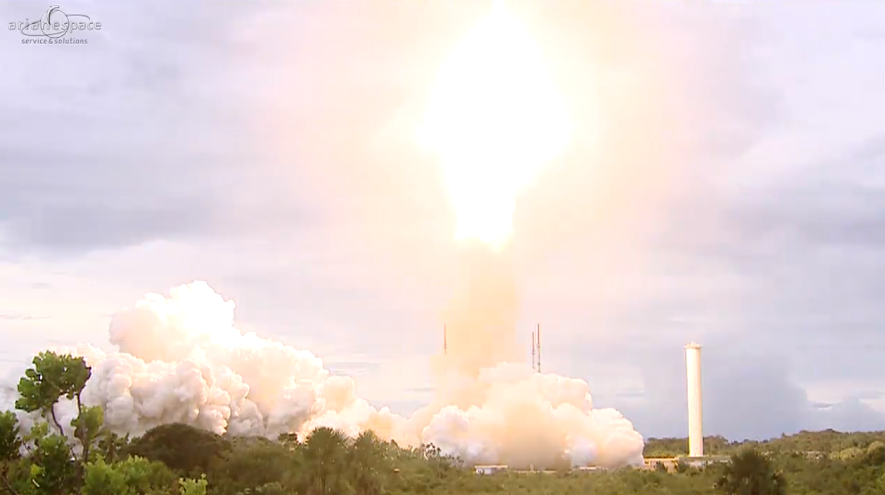 The Arianespace mission with DirecTV-15 and SKY México-1 is now underway following Ariane 5’s liftoff from the Spaceport in French Guiana.

Lift performance for the mission is approximately 9,960 kg., which includes 9,200 kg. for the DirecTV-15 and SKY México-1 payloads, along with associated hardware for the launcher’s SYLDA dual-passenger dispenser system and satellite integration hardware with the two direct-to-home broadcast satellites that were deployed during a flight lasting 37 minutes

The Ariane 5 ECA (Cryogenic Evolution type A) is the most powerful version in the Ariane 5 range of rockets that was used today. Those improvements relate mainly to the structure of the Ariane 5, allowing for an increased thrust and ability to carry heavier payloads into orbit.  Designed to place payloads weighing up to 9.6 tonnes into GTO, this increased capacity allows the Ariane 5 ECA to handle dual launches of very large satellites

DirecTV-15 rides in Ariane 5’s upper passenger position. Produced by Airbus Defence and Space using the Eurostar E3000 platform, it will provide services in the Ku-, Ka- and R-bands and has been classed as one of the most powerful broadcast satellites ever built for the United States.

Congratulations all around as the final step—separation of SKY Mexico-1— is successful.

SKY Mexico-1 is an Orbital ATK, Inc.-built satellite based the GEOStar-2 platform and carries Ku- and R-band transponders. It is situated in the lower slot of Ariane 5’s payload arrangement, contained in the SYLDA dispenser system.

Orbital ATK produced the satellite at its Dulles, Virginia manufacturing facility in just 20 months, four months ahead of the original baseline schedule.

Flight VA223 is Arianespace’s fourth launch in 2015 for its complete launcher family, following one previous mission each for Ariane 5, the medium-lift Soyuz and lightweight Vega.