Fifty years after the lunar landing the Royal Air Force is taking its first small steps into space.

Flight Lieutenant Mathew Stannard will be the first RAF pilot to help launch a satellite as part of the Ministry of Defence's £30m space programme. 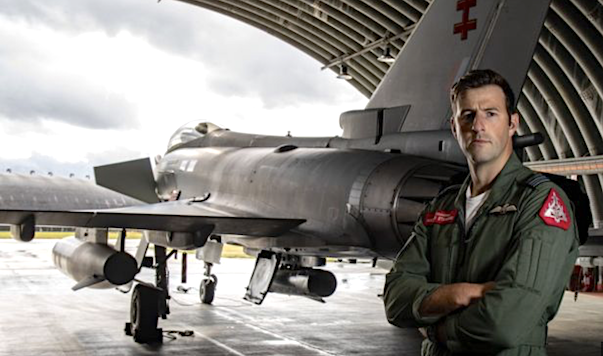 He will be swapping the cockpit of his RAF Typhoon jet for a heavier and slower Boeing 747.

The specially adapted passenger plane has been designed to carry a rocket which can launch satellites into space.

Working with the Virgin Orbit programme in California, Flt Lt Stannard will be a pioneer of the fledgling Space Force.

Speaking to the BBC in his first interview since being selected for the project, he said he was "very excited" to be joining a "very cool" space industry.

He reminds me he is not going to be the UK's first person in space. Helen Sharman and Michael Foale preceded him along with, more recently, Tim Peake, who once served in the Army. But he will be the RAF's "first person to go along this route to be followed by many more".

The MoD's spending on the space programme is modest when compared with the billions of dollars already being spent by the US, China and India. But it is yet more proof that space is the new frontier and next frontline for defence.

The RAF pilot notes that "it's the commercial sector leading the way".

Historically, it has taken a much larger rocket to launch a satellite from the ground, but Virgin Orbit aims to make it cheaper and quicker.

Its specially adapted 747 named Cosmic Girl carries a much smaller rocket under its wing, which will be fired into orbit at about 30,000 feet.

The rocket will contain a small satellite of about 300kg. Flt Lt Stannard said the unique selling point of Virgin Orbit is that it can be "launched from anywhere in the world" including the UK.

The other game changer is the satellite technology. The one that he will fire into orbit next year will be the "size of a washing machine".

The RAF already has a similar small satellite in orbit - launched conventionally from India last year. The UK-developed Carbonite 2 provides high quality video to the RAF and the plan is to have a "constellation" of these small satellites in orbit, providing high quality images, video and secure communications.

In theory, they will be quicker and cheaper to build, launch and to replace so "that they no longer become valuable targets," Flt Lt Stannard said.

It highlights the evolving threats in space. The US, China, Russia and India have all been developing anti-satellite weapons from missiles to lasers and jammers.

With that threat in mind the UK has also become the first formal partner of a new US-led coalition aimed at deterring "hostile acts in space".

Britain is sending eight military personnel to join Operation Olympic Defender to work alongside allies at the Combined Space Operations Centre in California.

These are the first small steps for the RAF in space and with limited resources it is largely having to rely on the US and the commercial sector to get beyond the Earth's atmosphere.

But it is still a giant leap into the unknown for Flt Lt Mathew Stannard.