A year after orbiting the first six OneWeb satellites, Arianespace has launched another batch — involving 34 satellites this time — to help its customers offer global internet access to all.

Arianespace will carry out 19 more Soyuz launches — along with the Ariane 62 version’s first flight — at the service of OneWeb, with these flights performed from three different space centers and occurring primarily during 2020 and 2021.

Today’s mission was the 50th Soyuz launch operated by Arianespace and Starsem, as well as the second successful mission for Arianespace in 2020. The cluster of spacecraft — produced by the OneWeb Satellites joint venture of OneWeb and Airbus — was deployed into a circular low Earth orbit during a flight lasting 3 hours and 45 minutes from liftoff to final payload separation. It was conducted by Arianespace and its Starsem affiliate. 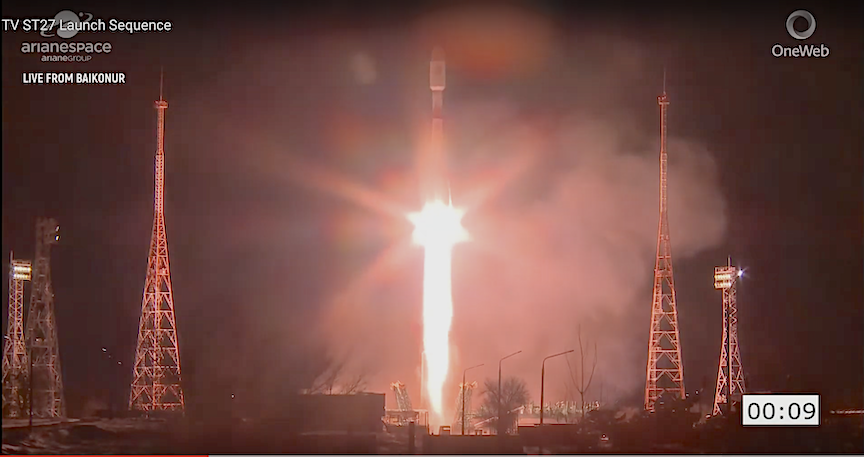 After an initial powered phase of Soyuz’ three lower stages, the flight — designated ST27 in Arianespace’s numbering system — included two burns of the Fregat upper stage to place its passengers at their targeted deployment points. Total lift performance was estimated at 5,504 kg.

Flight ST27 was Arianespace’s second launch on behalf of the global satellite operator — following the February 2019 Soyuz mission from French Guiana that successfully orbited OneWeb’s first six satellites. The company’s initial constellation is based on approximately 650 satellites and will scale to more than 900 as it grows to meet demand around the world.

Following the launch, Stéphane Israël, Chief Executive Officer of Arianespace, said: “With this second successful mission for OneWeb, Arianespace reaffirms its role as the operator’s strategic partner and prepares itself for numerous other launches. They will allowed our customer to achieve its goal of providing truly global internet coverage. Thanks to its complete family of launchers, both current (Ariane 5, Soyuz and Vega) and future (Ariane 6 and Vega C), Arianespace ensure a predominant role in the fast-growing market for constellation launches — whether for navigation, communications or Earth observation satellites.”

Today’s launch, the 27th Soyuz mission carried out by Arianespace and Starsem from Baikonur, Kazakhstan, injected 34 OneWeb satellites into orbit, bringing the total to 40. Liftoff was on Friday, February 7, 2020 at 2:42 a.m. local time (21:42 UTC on February 6).

The first six satellites in the OneWeb constellation were successfully orbited by Arianespace a year ago, in February 2019. Nineteen more Soyuz launches for this constellation will be carried out from three space centers (Kourou in French Guiana, Baikonur and Vostochny in Russia), along with the first Ariane 62 launch — with the missions taking place primarily in 2020 and 2021.

OneWeb will start customer demonstrations in 2020 and will offer global 24/7 coverage starting in 2021.

The OneWeb satellite operator intends to provide communications services across the planet by utilizing its constellation of new-generation satellites, which will provide seamless connectivity for everybody, anywhere in the world.

OneWeb therefore is deploying a network of satellites in low Earth orbit (LEO) to provide low-latency broadband services to a wide array of markets, including the aeronautical and maritime sectors, cellular network links, community Wi-Fi and emergency communications services. The operator’s primary objectives include providing connectivity for schools and reducing the digital divide around the world.

OneWeb Satellites — a joint venture founded by OneWeb and Airbus Defence and Space — is prime contractor for the constellation. Built in Florida on a dedicated production line, the payloads for this latest launch are the seventh to 40th OneWeb satellites orbited by Arianespace.

The 27th Soyuz launch (using a Soyuz-Fregat version) performed by Arianespace and Starsem from the Baikonur Cosmodrome in Kazakhstan also was the 50th carried out by these two companies since 1999, and the 1,917th flight overall for the Russian launch vehicle since its introduction in 1966.

This new launch brings to 147 the number of satellites launched by Arianespace for constellations: 56 for the operator Globalstar, 40 for the OneWeb system, 20 for the O3b constellation, four for the company Planet, and one for the Orbcomm network. The total also includes the launch of 26 satellites for the European Space Agency (ESA) and the European Commission within the scope of Europe’s Galileo satellite navigation program.

In addition to the OneWeb satellites, Arianespace’s order book backlog includes 16 other constellation satellites for the following operators: Spire (8), Airbus Defense and Space (4), ESA and the European Commission (4).