[SatNews] Arianespace is a hub of activity with...

Arianespace's Ariane 5 is on the move as launcher and payload preparations continue in French Guiana for the company’s upcoming dual-passenger mission at the service of Intelsat, DIRECTV and ARSAT.

With its basic build-up of a core cryogenic stage, two solid boosters and the cryogenic upper stage complete, Ariane 5 is moved to the Final Assembly Building, where it will receive a dual-satellite payload. In the foreground is the second launch table used for Ariane 5 missions.

The heavy-lift Ariane 5 vehicle for Arianespace’s next launch—designated Flight VA220—is now inside the Spaceport’s Final Assembly Building as of this writing, following its transfer by rail from the Launcher Integration Building on a mobile launch table. With Ariane 5 now under Arianespace’s responsibility, this workhorse launcher is in position to receive its ISDLA-1 and ARSAT-1 payloads, which will be followed by final verifications and subsequent rollout to the Spaceport’s ELA-3 complex for an October 16 liftoff. 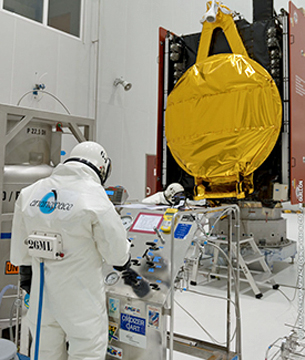 ARSAT-1 is fueled in the Spaceport’s S5 payload preparation building in preparation for launch on Arianespace Flight VA220.

Meanwhile, in separate Flight VA220 activity at the Spaceport, fueling is underway for ARSAT’s ARSAT-1 spacecraft in the S5 payload preparation building. Completion of this step will clear the way for transfer of the INVAP-produced satellite to the Final Assembly Building, where it is to be integrated with Ariane 5.

Joining ARSAT-1 on Arianespace’s fifth Ariane 5 flight of 2014 is ISDLA-1, which will be orbited for long-standing Arianespace customers Intelsat and DIRECTV and was built by SSL (Space Systems/Loral).