[SatNews] Duck and cover.. It's not like they can jump out the window of the ISS to avoid a collision—it's a wee bit more complicated when the debris flies at 17,500 miles per hour. 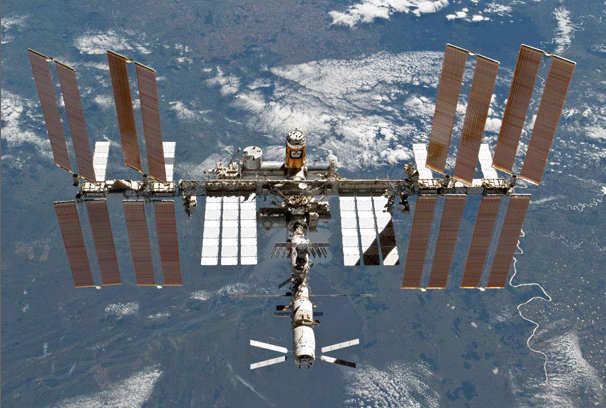 View of the International Space Station Astronauts aboard the International Space Station were forced to take shelter Tuesday morning when some unidentified space junk came alarmingly close to floating into their path. The station’s crew faced a similar risk in March 2009 after being warned of a possible collision with a tiny piece of an old rocket motor. In both cases, the drifting trash passed by without incident. (Credit: NASA).

Three astronauts living at the International Space Station were forced to scramble to safety after what NASA described as a "close pass" by flying Russian space debris on Thursday. The men decamped into the Soyuz spacecraft, which is attached to the orbiting station, while the chunk of an old Russian weather satellite sped by at 8:01 am (1201 GMT), the U.S. space agency said.

"The crew of the International Space Station is resuming normal operations after getting an all clear from Mission Control following a close pass by space debris this morning," NASA said in a statement. "All station systems are operating normally and the crew will move out of the Soyuz spacecraft in which they stayed during the debris pass."

The crew on board includes Russian cosmonauts Gennady Padalka and Mikhail Kornienko and American astronaut Scott Kelly. Kelly was notified by NASA of the fast-approaching space junk at 1029 GMT, about an hour and a half before the debris' closest approach.

"The data on the possible close pass was received too late and was not sufficiently precise enough for the station to take any evasive maneuver," NASA spokesman James Hartsfield told AFP in an email.

"In those cases, the crew can be called to put the station in a safe configuration and move to the Soyuz until the debris has passed." He added that there had been no impact to the ISS and all systems were operating as normal.

Another NASA spokesman said on the agency's live television broadcast that the shelter-in-place maneuver was something that the crew regularly trains for and likened it to a fire drill. NASA said it was the fourth time in the 15-year history of the space station that astronauts moved briefly into a Soyuz to avoid passing debris.

The Soyuz is the capsule that transports astronauts to and from the space station. 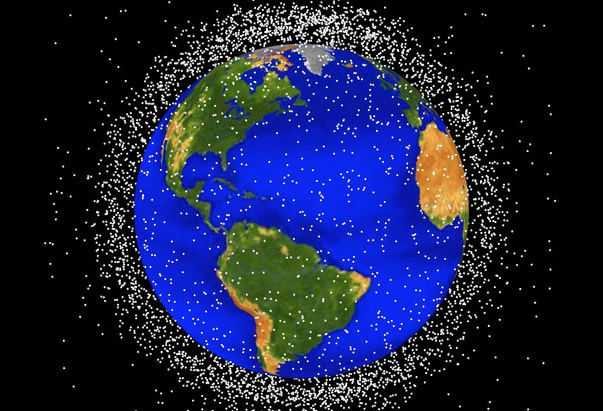 Computer-Generated Image of Objects in Orbit Being Tracked by NASA Space debris poses a growing threat to astronauts, orbiting spacecraft and people on the ground. As a result of human space exploration, earth’s orbit is now swarming with defunct satellites, used rocket boosters, items inadvertently dropped by astronauts and the perilous fragments—many smaller than a grain of sand—released when these floating objects collide at high speeds. (Credit:NASA)

Earlier, the Russian Interfax news agency quoted a source in the space industry as saying the space junk was a fragment of the Soviet meteorological satellite, Meteor-2, which was launched from Plesetsk cosmodrome in 1979. More than 500,000 pieces of debris, or “space junk,” are tracked as they orbit the Earth. They all travel at speeds up to 17,500 mph, fast enough for a relatively small piece of orbital debris to damage a satellite or a spacecraft. The rising population of space debris increases the potential danger to all space vehicles, but especially to the International Space Station, space shuttles and other spacecraft with humans aboard.

NASA takes the threat of collisions with space debris seriously and has a long-standing set of guidelines on how to deal with each potential collision threat. These guidelines, part of a larger body of decision-making aids known as flight rules, specify when the expected proximity of a piece of debris increases the probability of a collision enough that evasive action or other precautions to ensure the safety of the crew are needed.

Orbital debris is any man-made object in orbit about the Earth which no longer serves a useful function. Such debris includes nonfunctional spacecraft, abandoned launch vehicle stages, mission-related debris and fragmentation debris.

Even tiny paint flecks can damage a spacecraft when traveling at these velocities. In fact a number of space shuttle windows have been replaced because of damage caused by material that was analyzed and shown to be paint flecks.

“The greatest risk to space missions comes from non-trackable debris,” said Nicholas Johnson, NASA chief scientist for orbital debris. With so much orbital debris, there have been surprisingly few disastrous collisions.

In 1996, a French satellite was hit and damaged by debris from a French rocket that had exploded a decade earlier.

On February 10, 2009, a defunct Russian satellite collided with and destroyed a functioning U.S. Iridium commercial satellite. The collision added more than 2,000 pieces of trackable debris to the inventory of space junk.

China's 2007 anti-satellite test, which used a missile to destroy an old weather satellite, added more than 3,000 pieces to the debris problem.