[SatNews] "For the first time, we will be able to see the Milky Way in 3-D. In fact in 6-D—where stars are, and how they are moving.”

On 19 December 2013, Europe’s billion-star surveyor is due to be launched into space where it will embark on its mission to create a highly accurate 3D map of our galaxy.

By repeatedly observing a billion stars, with its billion-pixel video camera, the Gaia mission will allow astronomers to determine the origin and evolution of our galaxy whilst also testing gravity, mapping our inner solar system, and  uncovering tens of thousands of previously unseen objects, including asteroids in our solar system, planets around nearby stars, and supernovae in other galaxies. 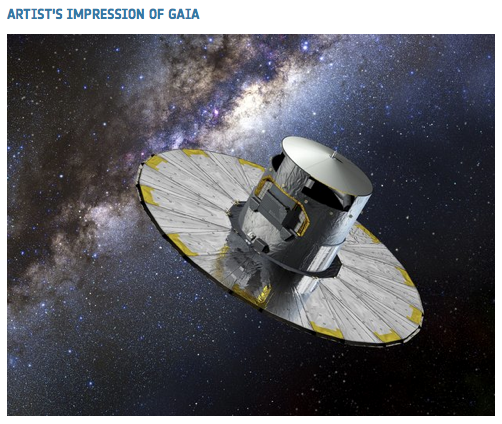 Professor Gerry Gilmore, from the University of Cambridge and UK Principal Investigator for Gaia, said:

“Gaia will be a revolution in our knowledge of the local Universe. For the first time we will have a fair sample of what is out there, where it is, how it is moving, how unseen (dark) matter is distributed, where and when stars formed and where and when the chemical elements of which we are made were created. Gaia will make a huge step towards understanding how the Milky Way came to be formed, and evolved into what we see today. For the first time, we will be able to see the Milky Way in 3-D. In fact in 6-D—where stars are, and how they are moving.”

UK participation in the mission is funded by the UK Space Agency and scientists and engineers from around the UK have played key roles in the design and build of Gaia. The UK Science and Technology Facilities Council (STFC) funded the early development of the project, including the set-up of the data applications center. STFC’s current support involves the UK exploitation of the scientific data to be yielded from the mission.

The Cambridge Gaia Data Processing center will be the front line in processing Gaia’s images, which will also be key to the discovery of many thousands of transient stars and supernovae: these will be made immediately available to schools and the public for their participation in the research.

“Gaia is an important space mission for the UK; we’ve won around €80 million of contracts from the European Space Agency to build the spacecraft and are providing a state of the art data center that will turn the mission’s raw data into the largest stellar catalogue ever made.”

"We are extremely proud of our contribution to the unique Gaia mission - the latest example in a long and successful heritage of supporting ESA science.  Stevenage engineers have provided core systems for the Gaia satellite including video processing unit, satellite electrical platform, and mechanical subsystems,"

Gaia will map the stars from an orbit around the Sun, near a location some 1.5 million km beyond Earth’s orbit known as the L2 Lagrangian point.  The spacecraft will spin slowly, sweeping its two telescopes across the entire sky and focusing their light simultaneously onto a single digital camera, the largest ever flown in space.

Once Gaia starts routine operations, around Easter 2014, astronomers will have the challenge of dealing with a flood of data. Even after being compressed by software, the data produced by the five-year mission will fill over 30 000 CD ROMs. This data will be transmitted 'raw' and will need processing on Earth to turn it into a calibrated set of measurements that can be freely used by the astronomical community. The cutting edge computer technology developed at the Cambridge Data Processing center will be key to this process.

The first Gaia science will be discoveries of new sources – supernovae, extreme variable stars and blazars - which will be discovered at the Cambridge processing center, and immediately made available for study by both professionals and the interested public. Gaia will discover many new sources which are bright enough for amateurs, and schools with access to public robotic telescopes, to become the first to confirm and obtain more information.

Schools and amateurs will be able to load their data onto the Gaia web site (http://gaia.ac.uk) where it will be used in scientific analyses, and fully credited. 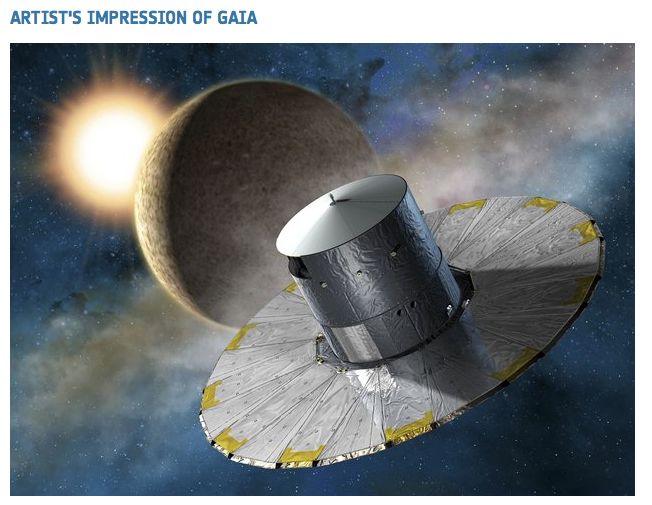 “A school class can be the first to `adopt a supernova’, observe it with robotic telescopes, such as the Faulkes, and provide critically important science information which we need to understand the new sources. That class will be doing original science, and will be credited for their research contributions” says Dr Heather Campbell, a scientist at Cambridge who is part of the Gaia science alerts analysis team.

"By participating in the Gaia Alerts program, and remotely controlling the Faulkes Telescopes to observe exciting targets discovered just hours beforehand, UK schools will be making real contributions to the research side of this project." added Professor Paul Roche, Director of the FT project at the University of South Wales.

The UK has two major roles in the Gaia mission: building the spacecraft, and delivering the science.

UK industry and science institutes won some €80 million of industrial contracts to build Gaia, with leadership roles in building the heart of Gaia, the array of 106 CCDs, the control avionics and the critical micro-propulsion system, as well as playing a critical role in the development of the Gaia spectrometer.

Astrium at Stevenage was responsible for the spacecraft's super precision guidance and control system as well as the powerful on-board computers needed to process the torrent of data it will produce.

The 'eye' of Gaia's camera has the most sensitive set of light detectors ever assembled for a space mission. It is also the largest focal plane array ever to be flown in space and contains a mosaic of 106 large area, high performance Charged Coupled Device (CCD) CCD91-72 image sensors, which are custom designed, manufactured and tested by UK company e2v. Without these image sensors the Gaia mission would not be possible.  These detectors were calibrated with the Gaia electronics at Mullard Space Science Laboratory.

Gaia data will be processed and analysed ready for release to the scientific community and public at six data centers, including one in the UK, operating software developed and tested by a consortium of 400 people across Europe, including some 50 people at 6 Institutes in the UK (Cambridge, UCL-MSSL, Leicester, Edinburgh, The Open University, STFC RAL Space and Bristol)

University College London’s Mullard Space Science Laboratory (MSSL) has a major role in spectroscopic science, and in conjunction with The Open University, is involved in software development including architecture, integration and validation, pre-processing development, spectra extraction and calibration.

The UK hosts the Cambridge data processing center, where the Gaia imaging data are processed. These data provide brightness, colour, and position information, which enable the core Gaia science, determining distances motions and the intrinsic properties of each star. Gaia also has a spectrograph, to measure the radial velocities of 300 million stars, delivering their complete 3-D positions and 3-D velocities. The spectra will be processed at the French data center, using software in part developed in the UK

Shortly after its launch from Europe’s space port in French Guiana, Gaia will deploy its sunshield, forming a 10.5 m-wide ‘skirt’ around the spacecraft’s base.  The shield has two purposes: to shade Gaia’s sensitive telescopes and cameras from sunlight, allowing them to cool to their operating temperature of –110°C, and to provide power to operate the spacecraft. The Sun-facing side of the shield is partially covered with solar panels to generate electricity.

Gaia will be placed in an orbit around the Sun, at the second Lagrange point L2, which is named after its discoverer, Joseph Louis Lagrange (1736-1813).  For the Sun-Earth system, the L2 point lies at a distance of 1.5 million kilometres from the Earth in the anti-Sun direction and co-rotates with the Earth in its 1-year orbit around the Sun. An operational lifetime of 5 years is planned.

Professor Gerry Gilmore from Cambridge’s Institute of Astronomy (IoA) and the Principal Investigator for UK involvement in the mission:

“The results from Gaia will revolutionise our understanding of the cosmos as never before.”

“Our understanding of what’s out there has been driven by looking at what we can see. We’ve never had a genuine opportunity to look at everything, to know what’s there, and to know where they are in relation to each other. We don’t even know how much we don’t know – there are sure to be objects out there that don’t even have names yet, since we don’t yet realise how strange they are.”

“There are literally hundreds of questions like this – why is the universe the way it is? Where did the Milky Way come from? What’s it really made of? Exactly how much does it weigh? How did it get to be like it is?”

“We will go beyond what we can see to understand reality. We are going to discover completely new things, things we would think are impossible.”

“The sensors on board the spacecraft will be able to detect objects so faint the human eye would have to be nearly 4,000 times more powerful to see them. This accuracy is equivalent to measuring a shirt button on the moon as seen from the Earth. It means we have to have the highest-capability computers to analyse the data.”

“Perhaps as exciting as the other projected discoveries is the ability of Gaia’s scientific harvest to be used to test some of the fundamental premises of astronomy. With Gaia, we can ‘calibrate the calibrators’ on which our cosmic knowledge is built. If you provide a major improvement in the accuracy of the foundations in astronomy, this works its way all the way through the field for decades to come.”

Dr.  Nicholas Walton, a member of the ESA Gaia Science team, and astronomer at the University of Cambridge:

“Through the Gaia GREAT network the UK has taken a leading role both in training the next generation of researchers in the sophisticated techniques required to fully exploit the data from Gaia, and enabling networking between researchers across Europe to use Gaia to answer some of the most fundamental questions concerning our place in the Universe.”

“We are immensely proud and excited to finally see our image sensors embark on this mission. All the hard work, dedication and expertise that has been put into our sensors and into the mission will finally come to fruition. Our products will now play their part in history as we help increase our understanding of our universe.”