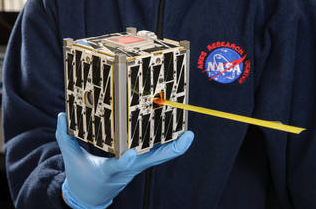 The launch of 'mega-constellations' of thousands of communication satellites could lead to a rise in collisions and build-up of space junk in Earth's orbit, scientists have warned.

A decrease in the cost of the manufacture of satellites is set to lead to the deployment of hundreds or thousands into space from next year, creating a massive rise in the number of active satellites from the 1,300 currently in use.

But Dr Hugh Lewis, senior lecture in aerospace engineering at the University of Southampton, has warned a 200-year computer simulation has shown the creation of a mega-constellation could create a 50 percent increase in the number of 'catastrophic collisions' between satellites.

He said this would increase the amount of space junk in orbit leading to the possibility of further collisions and the subsequent impact on the services provided by the satellites.

He said: 'There has been a paradigm shift in the manufacturing of satellites. The cost of making a single communications satellite usually runs to hundreds of millions of pounds, but mass-produced satellites will potentially be much cheaper.

'The constellations that are due to be deployed from next year contain an unprecedented number of satellites—and a constellation launched without much thought will see a significant impact on the space environment because of the increased rate of collisions that might occur.'

Dr Lewis' study, funded by the European Space Agency, has created a series of guidelines to help prevent collisions including decreasing the amount of time spent in low orbit after the end of a mission, making the satellites smaller and more lightweight, adding propulsion systems and deploying missions to remove faulty satellites.