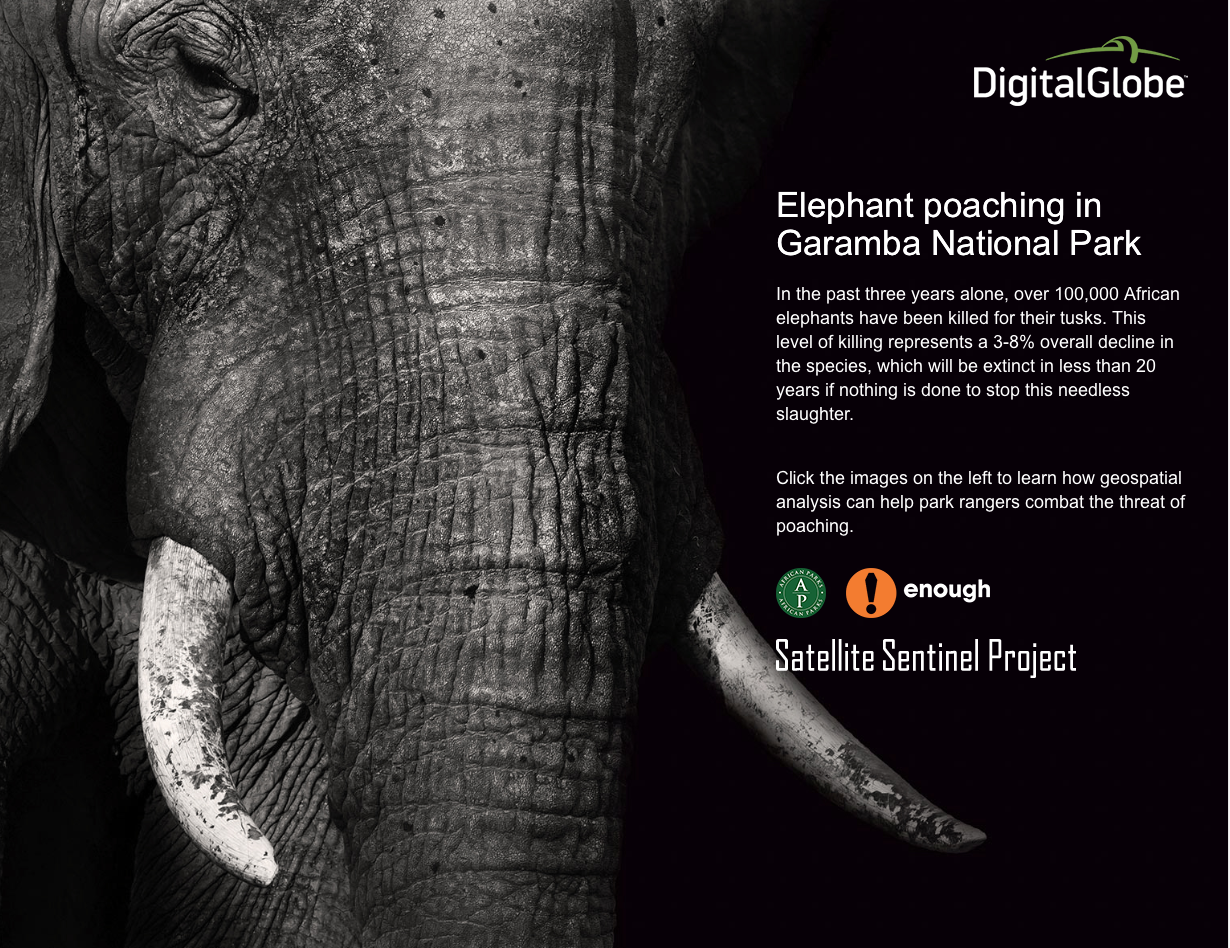 [SatNews] A new report by the Enough Project, the Satellite Sentinel Project, African Parks, and DigitalGlobe details how leading edge technology, including satellite imagery and predictive analytics, can be a game-changer for park rangers working to halt an unprecedented slaughter of elephants for ivory in the Democratic Republic of the Congo (DRC).

The report, “Poachers without Borders: New Satellite Imaging and Predictive Mapping to Empower Park Rangers and Combat Ivory Traffickers in Garamba National Park” identifies that ivory trafficking in Garamba National Park is funding armed groups responsible for widespread atrocities. The report launches alongside an interactive dynamic microsite on elephant poaching in Garamba, freely available for use by other organizations and the general public. According to African Parks, which manages Garamba on behalf of the Congolese government, 131 elephants were killed from April to December 2014.

The report also details how the Lord’s Resistance Army (LRA), renegade elements of the Congolese national army (the FARDC) and other armed groups from South Sudan and Sudan are using sophisticated techniques to evade detection of their poaching and trafficking activities, and makes recommendations for increased efforts to combat the illicit trade.

Kasper Agger, Enough Project LRA expert and Uganda-based field researcher, said: “Armed groups like the notorious Lord's Resistance Army and the Somalia based Al Shabaab partly fund their deadly activities through the killing of elephants. Ivory is traded for weapons, ammunition, satellite phones and other items that sustain armed groups and the violence they perpetrate against civilians and communities. This new report shows that innovative use of technology fused with data from the ground can help close the net on armed poachers and transnational ivory trafficking networks.

John Prendergast, Enough Project Founding Director, said: “Unprecedented prices for ivory have attracted violent armed groups like the LRA, corrupt army officials, and transnational criminal networks to this lucrative trade. Not only do the armed groups kill elephants, but they are also responsible for some of the worst human rights abuses across Africa, including the use of child soldiers, targeting of innocent civilians, and sexual violence."

African Parks, which manages Garamba National Park on behalf of the Congolese government, said: “According to the World Conservation Society, the pace of poaching is putting pressure on a continental elephant population that has declined more than 50 percent in the past 30 years. This increase in poaching is both qualitatively and quantitatively different from previous experience at Garamba.” 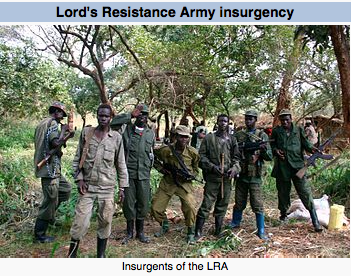 Sasha Lezhnev, Associate Director of Policy at the Enough Project, said: “Elephant poaching is now keeping Joseph Kony’s Lord’s Resistance Army alive. To stop this, the park rangers in Garamba must be aided with greater U.S. and international assistance to help stop this deadly trade. The U.S. and the African Union must also help shut down the ivory trading centers in the region that are funding armed groups and poachers.”

The report documents advanced geospatial analysis and remote monitoring via a constellation of five high-resolution earth imaging satellites. Results from this data and analysis help park rangers impede violent armed groups from trading ivory, allowing patrols to focus their efforts on high-probability threat areas. According to the report, this translates to a 95% area reduction where the majority of the recent poaching incidents have occurred.  The approach used in Garamba can be replicated for a larger effort by governments, African civil society organizations, international bodies, conservation groups and anti-atrocity organizations.