[SatNews] A dual-satellite payload for telecom operators in Africa and the Middle East has now moved to the Spaceport's launchpad.

All is now getting ready for Thursday's liftoff of Arianespace's second flight of 2011. This heavy-lift Ariane 5 ECA was transferred from the Spaceport's Final Assembly Building to the ELA-3 launch zone, riding atop one of two operational mobile launch tables for the workhorse commercial vehicle. Preparations now are underway for Thursday's final countdown leading to liftoff during a launch window that opens at 6:45 p.m. local time in French Guiana and continues to 7:52 p.m.

The Ariane 5's payload lift performance will be nearly 10,065 kg., which includes a mass of 8,965 kg. for its Yahsat Y1A and Intelsat New Dawn satellite passengers, along with the associated integration hardware and the launcher's SYLDA multi-payload dispenser system. Riding as the upper passenger in Ariane 5's payload "stack" is Yahsat Y1A, which will be released at approximately 27 minutes into the flight. The spacecraft will be used by the Al Yah Satellite Communications Company to provide customized relay services for the government and commercial sectors in the Middle East, Africa, Europe and Southwest Asia. With a liftoff mass of about 6,000 kg., Yahsat Y1A is based on Astrium's Eurostar E3000 platform, and its communications payload was supplied by Thales Alenia Space. Intelsat New Dawn, which is the first-ever African private sector communications satellite, was produced by Orbital Sciences Corporation and will be deployed from Ariane 5's lower passenger position at just over 35 minutes after liftoff. Once in service, Intelsat New Dawn will be operated and marketed as a part of the global Intelsat fleet, bringing to 22 the number of Intelsat satellites serving Africa. 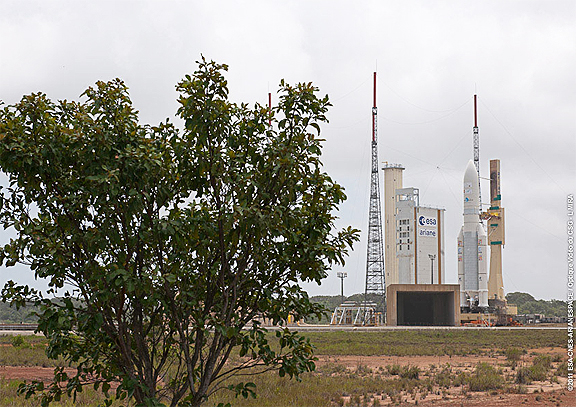 Tomorrow's mission is designated VA201, signifying the 201st launch of an Ariane family vehicle since 1979. It follows the February 16th flight of an Ariane 5 with the Automated Transfer Vehicle, which was deployed for a servicing mission with the International Space Station.