[SatNews] LEO satellites have seen at least four separate ventures announced, and surely many more filings made, over the past two years. In an industry that is always at the “cusp” of something and perpetually ripe for a “paradigm shift” NSR has adopted a cautiously optimistic stand to LEO constellations.

This time around, the entry of Elon Musk and Richard Branson as heavyweights contending each other for a piece of the global broadband pie, has prompted a new wave of interest and deep pockets of cash.

However, it is important to look at consumer broadband economics, no matter how well funded the kitty. If even half of the LEO constellations in the exhibit above see the light of day, we are looking at a subscriber and bandwidth landscape that is totally different from any projection that would be considered achievable in today’s date. NSR’s VSAT and Broadband Satellite Markets, 13th Edition report estimates consumer broadband subscribers over satellite reaching levels of 6.5 Million by 2023, and bandwidth demand about 1.2 Tbps by the same timeframe. These figures are made up almost entirely of GEO HTS systems that have built subscriber numbers over two or more generations of satellites. NSR also projects that the total supply of GEO HTS systems will cross 2 Tbps by 2023. The LEO HTS systems listed above are together adding up to more than 20 Tbps of supply! The deviation from what constitutes today’s satellite broadband subscribers, including HughesNet, ViaSat Exede, Eutelsat Tooway, SES SBBS, YahClick, Avanti and others is clearly that of an order of magnitude! So from purely economic terms, what needs to change?

Two items are aimed at making satellite broadband more affordable, something that almost all LEO constellations want to achieve:

The first map exhibit below shows broadband affordability as a percentage of income with the darker countries having poorer connectivity. Clearly, the ones that can afford broadband already have it. They want more, yes, to watch Netflix primarily but is LEO HTS the answer to a soon-to-be slow 100Mb Fiber-to-the-Home? The two maps in shades of blue show fixed and mobile broadband penetration. Somewhat less clear are the African and Asian countries where affordability may be low but mobile broadband has done well in terms of connecting people. Will this cellular industry be disrupted by LEO-HTS alone, especially when its revenues are larger than satellite by an order of magnitude? 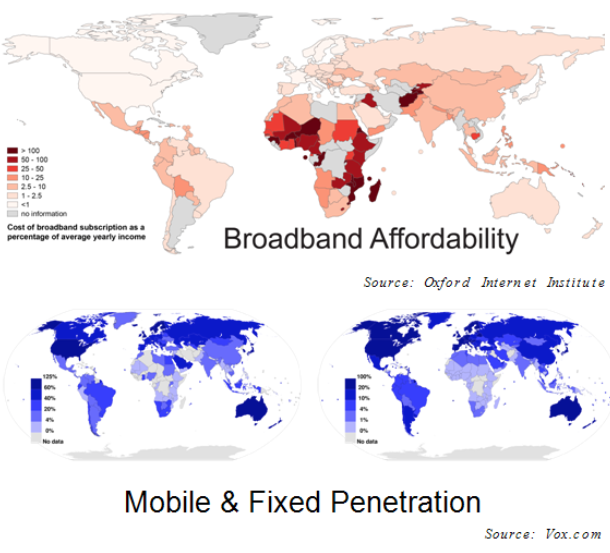 Both SpaceX and Virgin have launcher offerings of their own, which would make it somewhat natural for the companies to see the launch of hundreds, if not thousands, of satellites as a nice way to flex some serious “space” muscle. There are also plans to colonize Mars and send tourists to space, but let’s not go there for now. Committing to providing ubiquitous broadband coverage to billions is altruistic on one hand and a “me too” stab at Google and Facebook on the other. A happy side-effect would be a share of the 30-odd annual commercial satellite launches in GEO falling into either basket in the longer term, even as both launch systems are some way away from being truly flight proven. It helps that the likes of Arianespace are operating at a packed manifest and smaller systems like Sea Launch are falling by the wayside.

If Elon or Richard or Google or Facebook want to connect the “next billion” people to a satellite based Internet solution, a lot has to change besides just cost of hardware and service. Other constellations that started with a similar vision soon ran into either costly antenna design, or the need to pivot to an enterprise market that made more sense in the longer term, or both. The recent shake-ups at the likes of Kymeta are not helping the larger ecosystem, and neither are the hurdles in terms of gateways required or landing rights in various countries. Global ISPs, while growing into behemoths of the likes of Comcast, AT&T, Verizon, Vodafone and others are struggling to expand their network infrastructure without adopting priority data pricing strategies that are the subject of Net Neutrality debates worldwide. Funding seems to be the least of the concerns for the satellite broadband entrepreneurs right now, and rightly so.