Harris Corporation—What A Way To Start The New Year, With Three In A Row (Comms) 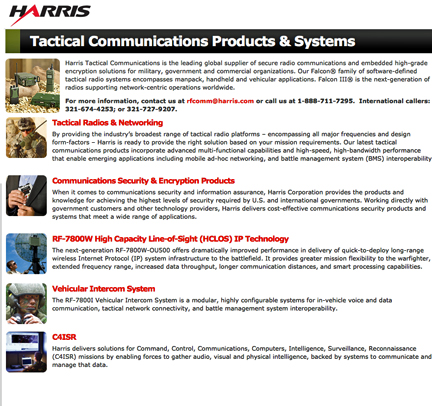 [SatNews] Harris Corporation (NYSE:HRS)  has received $28 million in orders to supply Falcon tactical radios to a nation in Latin America, a $49 million order to provide a nation in the Middle East with integrated TacComms, and a $36 million order from a NATO country for Falcon II radios.

For the Latin American country, the radios will be used to provide a mission-critical tactical communications system to counter drug smuggling and other international cross-border criminal activities. The nation is acquiring Falcon III® RF-7800S Secure Personal Radios and RF-7800V Combat Net Radios, along with Falcon II® RF-5800H High Frequency Radios for improved communications interoperability between U.S. and partner forces.

For the Middle Eastern nation, Falcon® radios will be provided, and they will be integrated with vehicular intercom systems in support of a crucial C4ISR network for military and security forces. The RF-7800H wideband high-freq radio; the RF-7800V Combat Net Radio; the RF-7800M Multiband Networking Radio, and the RF-7800I Intercoms Systems are all included in this contract.

Harris has shipped more than 45,000 Falcon III tactical communication radios to the U.S. DoD as well as to 15 nations. For further information regarding the Harris Corporation's product line, please access: http://rf.harris.com/products