[SatNews] ...the Company through its existing and planned satellites, broadcasts diversified and high quality content with anti-jamming capabilities across the MENA region.

Es’hailSat, the Qatar Satellite Company, is exhibiting at the annual IBC exhibition in Amsterdam at Stand B74- Hall 4, which attracts clients from the dynamic and fast-growing broadcast, digital media and satellite sectors.  The company is showcasing Es’hail 1, the first satellite for the State of Qatar, which commenced operations on December 18th, 2013, Qatar’s National Day.  Es’hail 1 is already providing premium DTH television content from the 25.5/26 degrees East neighborhood for leading channels such as Al Jazeera and beIN Sports.

Es’hailSat, established in 2010, presents a new dimension to Qatar’s diversifying economy with the creation of a satellite operator in the region.  The company’s satellite fleet will enable customers to substantially increase their broadcasting capability in HD and Ultra HD and supports Qatar’s 2030 vision and commitment to meeting the sophisticated communications infrastructure the country is putting in place to host FIFA’s World Cup in 2022.

Es’hailSat, through its existing and planned satellites, broadcasts diversified and high quality content with anti-jamming capabilities across the MENA region. Es’hail 1 is currently being used to transmit premium news and sports channel bouquets for Al Jazeera and beIN Sports.  And the company was very proud to provide beIN Sports with capacity for high definition broadcasting of the 2014 FIFA World Cup. 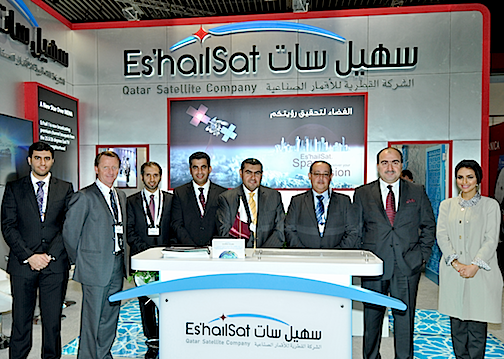 With the success of Es’hail 1, the company is already pushing ahead with plans to expand its satellite fleet.  Following an international consultation, Mitsubishi Electric Corporation (MELCO) has been selected to build the company’s second satellite, Es’hail 2. The new high-performance satellite will be positioned at the 26 degrees East hotspot position for TV broadcasting and significantly adds to the company’s ability to provide high quality, premium DTH television content across the Middle East and North Africa.  Es’hail 2 is expected to launch at the end of 2016.  And discussions are already ongoing with customers and stakeholders to define the requirements for a further satellite—Es’hail 3.

Ali Al Kuwari, Chief Executive Officer of Es’hailSat, commented: “We are delighted to participate once again at IBC.  With our first satellite Es’hail 1 currently broadcasting premium content for the MENA, and with future satellites planned, IBC is an important occasion where Es’hailSat can confirm its position as a credible satellite operator for the region.  We see this exhibition as a key element in our strategy to attract customers who value broadcasting independence, quality of service and market penetration.”

Es’hailSat, The Qatar Satellite Company was established in 2010, is based in Doha, Qatar, and owns and operates satellites to serve broadcasters, businesses and governments. Es’hail 1, which shares a spacecraft platform with the European satellite operator EUTELSAT, was successfully launched on August 29th 2013.  The satellite provides television, voice, Internet, corporate and government communications services across the Middle East and North Africa region and beyond. Es’hail 2 is currently under development and will be located at the 26 degrees East TV broadcasting hotspot.  Learn more here.