Arianespace's Soyuz Flight VS09... Gathers Up The Galileo 'Children' For The Ride Of A Lifetime (Launch)


[SatNews] With a constellation of 30 satellites at full deployment, the project will determine accurate locations for most places on Earth and—as a result of its overall doubling of available satellites and the spacecraft's positions in orbits...

"Doresa" and "Milena", the first two Galileo FOC (Full Operational Capability) satellites, are ready for their ride to orbit this week, as preparations for Arianespace's Soyuz Flight VS09 move into the final stages.

The pair of Galileo satellites and their dispenser system have now been integrated atop the three-stage Soyuz with installation of the medium-lift workhorse vehicle's "upper composite," which also includes the protective payload fairing and the Fregat upper stage.

This activity, which occurred inside the purpose-built mobile gantry at the Soyuz launch complex in French Guiana, follows the upper composite's transfer on a special transporter from the separate S3B payload preparation facility. 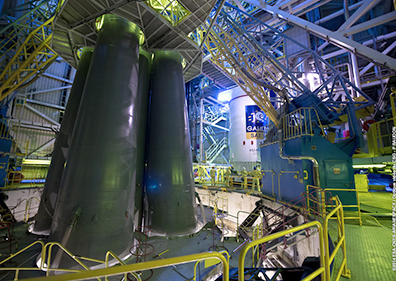 A view from inside the mobile gantry at its base shows Soyuz’ first-stage boosters in the foreground, while the upper composite – including the two Galileo satellites, their dispenser system and protective fairing, as well as the Fregat upper stage – is in the background ready to be hoisted for its installation.

These steps complete Arianespace's Soyuz launcher build-up for its August 21 mission, allowing final checkout to commence in preparation for a scheduled liftoff at precisely 9:31:14 a.m. local time in French Guiana on Thursday.

With a liftoff mass of 730 kg. each and a design life of 12 years or more,
Doresa and Milena, named for children who won a European
Commission-painting contest, are the first in a series of satellites for
Galileo's FOC phase, which Arianespace will continue to deploy with its
workhorse Soyuz and Ariane 5 vehicles.

Galileo's FOC phase is managed and funded by the European Commission, which delegated the European Space Agency as the program's design and procurement agent on its behalf. Doresa and Milena were built by FOC prime contractor OHB System in Bremen, Germany, with the spacecraft's navigation payloads provided by the UK's Surrey Satellite Technology Ltd.

With a constellation of 30 satellites at full deployment, Galileo will determine accurate locations for most places on Earth and—as a result of
its overall doubling of available satellites and the spacecraft's positions in orbits at greater inclination to the equatorial plane than GPS—provide better coverage at high latitudes, including Northern Europe.