Arianespace’s Next Launch Approaches of the Super Weather Forecaster, Metop-C

Coming in early November... Arianespace is currently making payload preparations for their next launch from French Guiana: a Soyuz mission to orbit Metop-C, the third in a series of European satellites that is significantly enhancing weather forecasting. Built by Airbus Defence and Space, Metop-C continues the European Meteorological Operational program of polar-orbiting spacecraft operated by the European Organisation for the Exploitation of Meteorological Satellites (EUMETSAT). 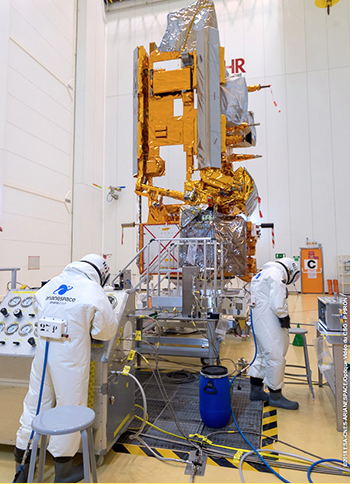 During activity in the Spaceport’s S3B clean room facility this month, Metop-C was “topped off” with its propellant load — which followed its initial integration and checkout processes (see photo on right).

The program also represents the European contribution to a cooperative venture with the United States’ National Oceanic and Atmospheric Administration (NOAA), which has been delivering meteorological data from polar orbit, free of charge, to users worldwide during the past 40 years.

The first two satellites — Metop-A and Metop-B — were launched on Soyuz vehicles from Baikonour in 2006 and 2012, respectively, by Starsem (Arianespace’s European-Russian joint-venture).

Metop spacecraft carry a payload of instruments to measure a wide range of variables — such as temperature and humidity, wind speed and direction over oceans, ozone and other atmospheric gases — marking major advances in global weather forecasting and climate monitoring capabilities.

Metop-C is scheduled for an early November liftoff on Arianespace Flight VS19, which will be the 19th Soyuz mission with the Russian-built medium-lift workhorse performed from the Spaceport. After its deployment by Soyuz, the satellite is to undergo approximately six-weeks of commissioning, during which the proper operation of the spacecraft and its instrumentation is verified.