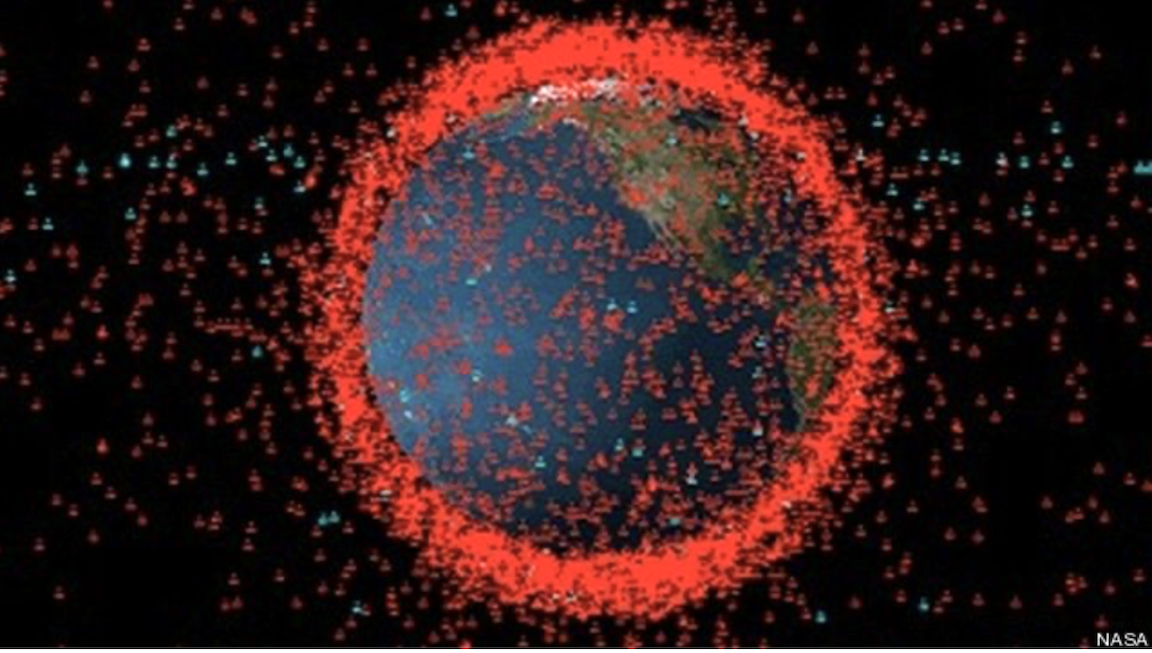 "I think we need to recognize that the space domain has evolved over the past several years," says Secure World Foundation's Victoria Samson. "And then our governance needs to evolve with that."

WASHINGTON: Fewer than half of global space operators comply with the current 25-year deadline for disposal of dead satellites, contributing to the ever-growing amount of junk littering space and putting active satellites in danger, says the head of NASA’s Orbital Debris office J.C. Liou.

“The reality is that the global compliance level is far less than 50 percent. The takeaway message here is that the global space community must improve compliance with orbital debris mitigation best practices. That is the number one priority,” Liou told a webinar sponsored by Brookings Institution.

Liou said NASA estimates that there are some 500,000 pieces of space debris bigger than 1 centimeter in diameter and that the clusters of dead satellites, pieces of rockets, bolts and the like will just keep growing — even if all operators did the right thing. Even bits of space flotsam only 1cm in size can harm a satellite because at orbital speeds objects collide with a high impact velocity.

NASA uses mathematical models, as well as data provided by space tracking sensors, to characterize the debris environment.  Its calculations are agnostic about the origins of that debris; meaning debris created by all US government satellites is included.

Space junk, Liou stressed, is already “a threat to the safe operation of space missions.”

At the same time, Liou stuck by NASA’s controversial contention that the “25-year rule” for satellite disposal, first established in 1995, does not need changing even in the face of increasing debris from planned mega-constellations in Low Earth Orbit (LEO).

“The benefit of reducing the 25-year rule to five years is not very significant,” he said.

As Breaking D readers know, the 25-year rule has been a bone of contention in interagency discussions on debris mitigation and future space traffic management, pitting DoD and several other agencies against NASA. Last December, the National Space Council signed off on an updated version of the US Orbital Debris Mitigation Standard Practices (ODMSP) that upheld the rule.

The ODMSP standard practices must be followed by all US government entities that operate satellites, including the military and the Intelligence Community. The standard practices, designed to keep a lid on debris creation during launch and satellite operations, also are incorporated into the regulatory requirements for commercial operators seeking US licenses from various federal agencies.

A number of major satellite operators and launching firms, such as those involved in the Space Safety Coalition, have also pushed to reduce the current disposal deadline to five years. Space Safety Coalition members include commercial imagery giant Maxar Technologies, that supplies data to the Intelligence Community, launch provider Rocket Lab that is putting up small satellites for the Space Force, and satellite communications firm Iridium that provides voice and text connectivity for US troops all around the world.

Further, the FCC last month decided to reconsider whether a shorter disposal deadline is warranted due to the expected explosion in the number of satellites in LEO — a decision that has prompted the National Space Council to open discussions with the independent commission.

Even with the recent bankruptcy of OneWeb, with plans for some 650 LEO-based satellites, the number of active satellites on orbit is expected to skyrocket over the next decade as currently planned mega-constellations (networks of many satellites working together) are launched.

Victoria Samson, Washington office director for Secure World Foundation, told the webinar there now are some 2,200 total active satellites in all orbits. However, she stressed, as many as 50,000 more could be launched in the near- to medium-term — most of them into LEO and Medium Earth Orbit.

Further, she noted, many satellites fail upon launch — which means they instantaneously become space junk. This is on top of the that many of the planned satellites designed to have short life spans to keep down costs and to allow rapid technology upgrades to a constellation’s functioning.

“I think we need to recognize that the space domain has evolved over the past several years,” she said. “And then our governance needs to evolve with that.”

In an interview with Breaking D last week, Ceperley said LeoLabs — which just unveiled a new automated collision avoidance service for LEO operations — already is “building and testing” hardware and software with the future environment in mind.

LeoLabs now operates three self-built radar facilities, including one in New Zealand (known as the Kiwi Radar) that can track space objects down to 2cm in diameter. Ceperley said he is hoping to announce the fourth radar’s completion and location by the end of the year.

Likewise, LeoLabs is building in the ability to process both smaller debris and increased numbers of objects needing tracked, Ceperley said.

“LEO is growing so quickly, and so dynamically — and pretty soon we’ll have small debris involved — that it’s really important that you have a system that scales,” he explained. “And we’ve built that from the start. We’re in the cloud, we paid a lot of attention to the software architecture, so we can handle all this new traffic.”

The new LeoLabs service is unique in four ways, Ceperely said: “It’s the first automated; the first real time; the first service architected for LEO; and the first transparent service.”

The automated system is always on, watching a customers satellites 24/7, Ceperley explained. It also allows operators to interactively — via machine to machine communications — ask for more data if the system spots another space object getting close to one of their satellites.

Customers also can ask LeoLabs to help them plot a planned maneuver so they can avoid nearby satellites and debris.

One key difference between LeoLabs fee-based service and the collision warnings provided to operators for free by the US military — using its Space Surveillance Network (SSN) of radar and telescopes and the catalog developed by the 18th Space Control Squadron — is that the military does not consistently track space junk. Instead, the military space situational awareness network originally was designed to follow the whereabouts of Russian satellites, and to this day prioritizes watching adversary spacecraft.

“The US government, it doesn’t even watch for debris on debris, or derelict on derelict, conjunctions. Our system does, and it scales,” Ceperley said.