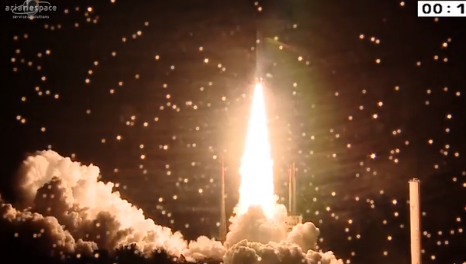 [SatNews] Success for the ARSAT-1 and Intelsat-30

Arianespace’s mission with Intelsat 30, hosting the DLA-1 payload, and ARSAT-1 is now underway following Ariane 5’s liftoff from the Spaceport in French Guiana, burning 5 tons of fuel per second.

Total lift performance for today’s launch is approximately 10,000 kg., with the two spacecraft to be deployed during a flight lasting 33 minutes.

Arianespace continued Ariane 5’s track record of success with another heavy-lift mission performed today from the Spaceport in French Guiana, which orbited a pair of telecommunications satellites for Latin America: Intelsat 30, which is hosting the DLA-1 payload; and ARSAT-1.

Both spacecraft were deployed into geostationary transfer orbits following their ascent from the Spaceport’s ELA-3 launch zone, with Intelsat 30.

Arianespace continued Ariane 5’s track record of success with another heavy-lift mission performed today from the Spaceport in French Guiana, which orbited a pair of telecommunications satellites for Latin America: Intelsat 30, which is hosting the DLA-1 payload; and ARSAT-1.

Both spacecraft were deployed into geostationary transfer orbits following their ascent from the Spaceport’s ELA-3 launch zone, with Intelsat 30 released nearly 28 minutes after liftoff, and ARSAT-1 separating approximately six minutes later to complete the flight sequence.

Ariane 5 delivered an estimated total liftoff performance of 10,000 kg., including its two passengers and hardware for the launcher’s dual-payload deployment system. This mission was the 220th launch of an Ariane-series vehicle since its introduction in 1979, and the 62nd consecutive success for Ariane 5—as well as its 76th flight overall.

“The two satellites orbited tonight will serve users located in Latin America, a region that has always had a special place in the heart of
Arianespace, because this is where our launches take place, and also because our market share in the region has always exceeded 50 percent,” said Arianespace Chairman & CEO Stéphane Israël in post-launch comments at the Spaceport.

Israël added the recognition of Arianespace’s launch services quality, reliability and experience was demonstrated once again by today’s mission, which was performed at the service of two established global telecommunications players—Intelsat and DIRECTV—as well as for a new regional operator—ARSAT (Empresa Argentina de Soluciones Satelitales Sociedad Anonima). 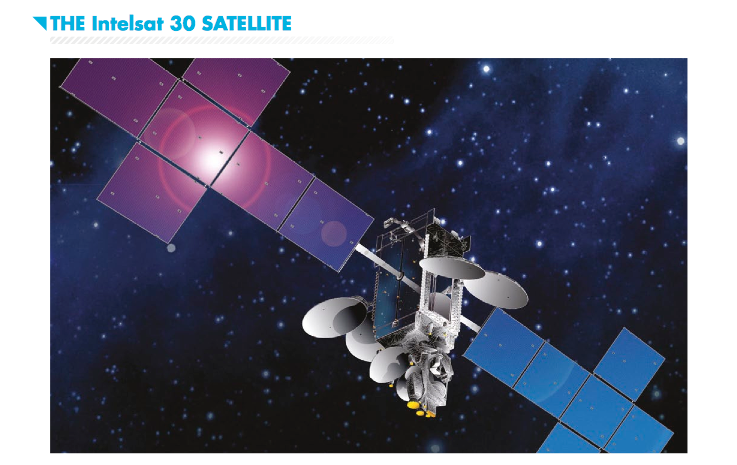 Intelsat 30, released first from Ariane 5’s upper passenger position, is a high-power relay spacecraft built by SSL (Space Systems/Loral) for Intelsat. Based on the 1300-series satellite platform, it hosts the DLA-1 payload for DIRECTV.

With a design life of 15 years, Intelsat 30 will be co-located with Intelsat’s Galaxy 3C satellite at 95 deg. West—from which it will expand
direct-to-home entertainment offerings in Latin America, as well as provide backup and restoration services.

Intelsat 30 is the 54th satellite launched by Arianespace for Intelsat, as well as the 45th SSL-produced relay platform – continuing a 31-year
relationship between these three companies. Arianespace also has orbited six satellites for DIRECTV, including Intelsat 30 and its DLA-1 payload lofted this evening.

Ken Lee, the Intelsat Senior Vice President for Space Systems, acknowledged Arianespace’s “impressive professionalism and skill” for this Ariane 5 launch, which he described as vital and important to his company.

The second payload deployed by Ariane 5 on today’s mission—ARSAT-1—is the first geostationary satellite built in Argentina. It was produced for ARSAT by the company INVAP, with Airbus Defence and Space and Thales Alenia Space serving as leading equipment suppliers.

As the first satellite to be launched by Arianespace for ARSAT, ARSAT-1 will operate from an orbital position of 71.8 deg. West and will deliver a wide range of telecommunications, data transmission, telephone and television services across all of Argentina, Chile, Uruguay and Paraguay.

The Argentinian government's Secretary of Communications, Norberto Berner, hailed Arianespace’s mission success as a historic day for the country, which will create opportunities for its citizens by opening up new communications services.

Najat Vallaud-Belkacem, the French Minister of National Education, Higher Education and Research, noted the importance of Arianespace’s launch services on both a European and global scale.  She said France supports the continuation of Europe’s launch services leadership—especially with upcoming decisions on the next-generation Ariane 6, which will further strengthen the company’s competitiveness.

“At Arianespace, you have demonstrated that you were right in continuously adapting in terms of competence and resources,” Vallaud-Belkacem explained.  “Competition is fierce with the arrival of new players in the market, but I think this competition also can be a source of opportunity—the opportunity for Europe to demonstrate the value-added it can bring, in particular through the expertise and reliability of the services provided…On behalf of the French government, I want to express our conviction and commitment that Ariane 6 must enable Europe to continue leading the race in the global competition.”

With today’s success, Arianespace has conducted nine launches from French Guiana in 2014, comprising five Ariane 5 flights, three missions with Soyuz and one Vega liftoff, a pace which keeps the company on track to meet its 2014 target of 12 missions, based on the availability of payloads scheduled for these launches.

Arianespace’s Stéphane Israël said the company’s three remaining scheduled missions for 2014 are a lightweight Vega flight on November 18 with Europe’s Intermediate eXperimental Vehicle (IXV) spaceplane, an early December liftoff of Ariane 5 with the DIRECTV-14 and GSAT-16 relay platforms, and a medium-lift Soyuz launch with a cluster of O3b Networks connectivity satellites.

Statement from Airbus Defence and Space

Airbus Defence and Space : 62nd successful launch in a row of Ariane 5 demonstrating the exceptional reliability of the European heavy launcher.

Ariane 5 has been successfully launched from Kourou, French Guiana, for the 62nd time in a row, once again confirming the reliability of the European launcher developed and built by Airbus Defence and Space, the world’s number two space technology company.

The required performance for this, the 220th Ariane flight – for which Arianespace conducted the launch operations – was to transport 10,083 kg into geostationary transfer orbit, including 9,293 kg for the two satellites on board. The remaining mass was for the SYLDA dual launch system and the satellite integration hardware.

“The 62nd successful launch in a row confirms the outstanding industrial capabilities of the teams at Airbus Defence and Space, the prime contractor for the Ariane programme since 2003, and our ability to use our experience to implement the industrial organisation for future European launchers,” said François Auque, Head of Space Systems. “We would like to thank Arianespace, for their success in commercialising the launches and operating the range of European launcher systems at the Guiana Space Centre, as well as our trusted and dependable industrial and institutional partners for our joint success for more than 10 years.” 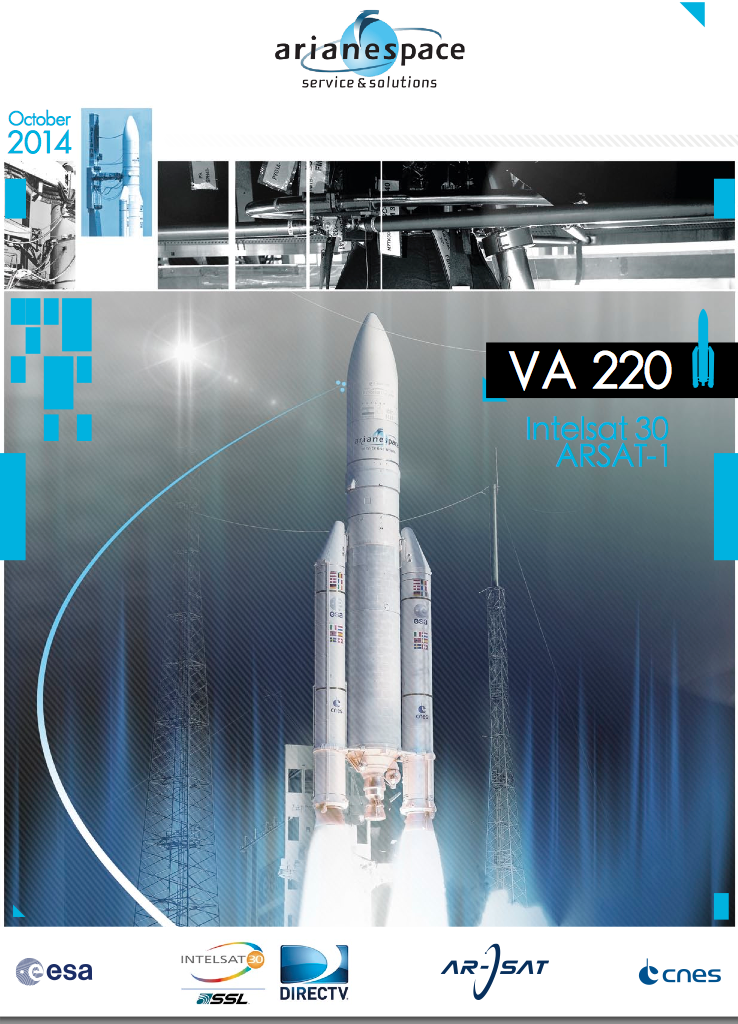 Airbus Defence and Space has been the prime contractor for the European Ariane 5 launcher, one of the largest and most ambitious space programmes in the world, since 2003. The company oversees an industrial network that brings together more than 550 companies (more than 20% of which are SMEs) in 12 European countries. Space Systems also manages the entire industrial supply chain, from the manufacture of equipment and stages to the complete integration of the launcher in French Guiana, in line with the customer’s specifications. Drawing on the expertise the company has acquired and the investments it has made over a period of more than 10 years, Ariane 5 has become the most reliable commercial launcher on the global market and has increased its geostationary orbit payload capacity by almost two metric tonnes. Representing cutting-edge European expertise, the Ariane 5 launcher has been specially designed to inject Intelsat 30 will weigh about 6,300 kg at launch, and offers a design life of at least 15 years. It will be the 54th satellite launched by Arianespace for Intelsat.

Intelsat 30 is also the 45th satellite built by Space Systems/Loral to be launched by Arianespace.

ARSAT-1 is the first in a series of geostationary (GEO) satellites that will give Argentina its own space telecommunications system. Fitted with 24 Ku-band transponders, it will provide Argentina and neighboring countries with direct-to-home television (DTH), Internet access services for its reception on VSAT antennas, data transmission and IP telephony.

ARSAT-1 is the first GEO satellite to be built in Argentina, specified by the national telecommunications company ARSAT, who also did the technical monitoring of the entire project. The Argentinian high technology company, INVAP, was the manufacturer of various components and responsible of the design and integration of the satellite.