Sentinel-2B soars and monitors from the soil to the sky... Copernicus' Earth Observation mission 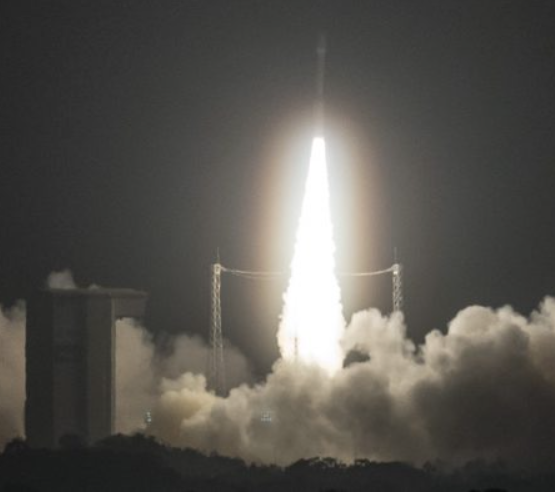 After lifting off from the Spaceport, Vega deployed its Sentinel-2B satellite passenger into Sun-synchronous orbit for a mission to monitor land masses and coastal zones around the world.  Photo Arianespace

Bon chance, good luck...and success! For this the ninth consecutive on-target launch with Vega since its introduction at the Spaceport in February 2012.

Today's launch marked Arianespace’s third liftoff so far in 2017 – during which the company is targeting up to 12 missions with its launcher family of Vega along with the medium-lift Soyuz and heavyweight Ariane 5.

Tonight’s Sentinel-2B payload is a part of the Copernicus satellite system being deployed in the European Commission’s program to provide Europe with continuous, independent and reliable access to Earth observation data. The Sentinel-2B Earth observation satellite primarily focuses on monitoring land masses and coastal zones around the world. Its data will be used for applications concerning the monitoring of vegetation, soil types and habitats. The spacecraft features a multispectral, wide-swath, high-resolution optical imaging instrument.

Sentinel-2B will be positioned in an orbit opposite that of Sentinel-2A to ensure optimum coverage and data delivery. The pair of Sentinel-2 satellites will cover the Earth’s entire surface in five days. This high frequency means they will capture brand-new views of the Earth, driving considerable progress in monitoring and predicting changes in vegetation and aquatic pollution.

Sentinel-2B was built by a consortium led by Airbus.

Copernicus is the European Commission’s Earth observation program. Its aim is to give Europe continuous, independent and reliable access to Earth observation data. It covers a vast spectrum of missions that will enable this continent to better control and protect the environment, enhance understanding of the underlying phenomena in climate change, as well as improve security for European citizens.

“Through Copernicus, Europe is developing its own global monitoring system to better address our environment and security issues,” said Luce Fabreguettes, Arianespace’s Senior Vice President – Missions. “This objective is fully in line with our mission to provide autonomous and independent access to space to Europe, at the service of a better life on Earth.”