Arianespace has completed a major preparation milestone for their next Soyuz launch with integration of the mission’s high-profile payload: the initial six spacecraft in OneWeb’s constellation, which will provide affordable high-speed internet access for users around the world. 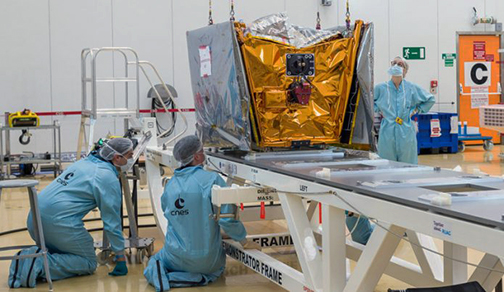 One of the six OneWeb satellites for launch on Soyuz Flight VS21 is integrated on its payload dispenser during activity inside the Spaceport’s S3B payload preparation facility.
Photo is courtesy of Arianespace.

The spacecraft — produced by the OneWeb Satellites joint venture of OneWeb and Airbus — will be orbited on Arianespace’s first Soyuz mission of 2019 from the Spaceport in French Guiana. Designated Flight VS21, the event has a targeted liftoff of February 26. Integration of the six satellites on their multi-payload dispenser system — which will deploy them during the mission from atop Soyuz’ Fregat upper stage — was completed in the Spaceport’s S3B payload preparation facility.

Once placed in a near-polar orbit by Soyuz, the OneWeb spacecraft will operate at an altitude of 1,200 km., giving customers extremely low latency and providing communications access to the entire world with fiber-quality internet connectivity. OneWeb is building the world’s largest and highest throughput satellite system to connect everyone, everywhere – by land, air, sea with a vision to bridge the digital divide once and for all. To develop their constellation of 150 kg. satellites, OneWeb signed a contract with Arianespace in 2015 for 21 Soyuz launches.

Artistic rendition of the OneWeb constellation. Image is courtesy of the company.

The upcoming Flight VS21 will mark the 21st liftoff of Soyuz from French Guiana since this medium-lift launcher’s 2011 operational debut at the Spaceport. As Arianespace’s second of as many as 12 missions planned for 2019, Flight VS21 also will continue the momentum gained from the company’s year-opening launch: Flight VA247 with Ariane 5, which successfully delivered a pair of telecommunications relay platforms – Saudi Geostationary Satellite 1/Hellas Sat 4 (HS-4/SGS-1) and GSAT-31 – to geostationary orbit on February 5.