[SatNews] "This is the first time that we have had a secure communications capability in the region, and shows the depth of our commitment to our allies and partners in the region, including Malaysia, in humanitarian and peacekeeping operations."

Airbus Defence and Space has announced that the planned 67,000 km (41,631.9 miles) move of the Skynet 5A satellite over the Asia Pacific region is on track. The move from 6 degrees East to 94.8 degrees East will expand Airbus Defence and Space’s capability to provide protected and secure military satcom services to allied governments in the Asia-Pacific region. The satellite will be on station at its new location in the autumn this year. 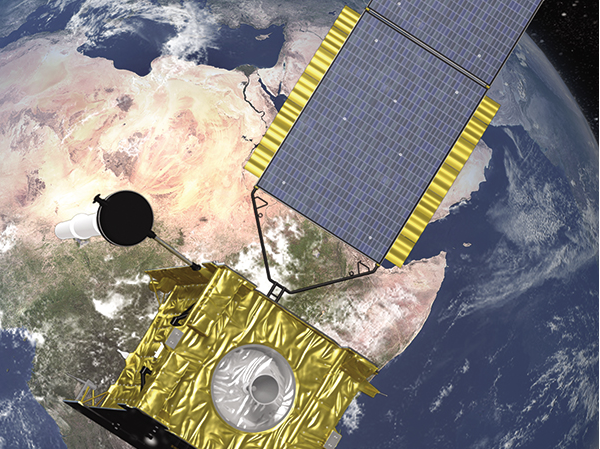 Airbus Defence and Space announced the planned move of Skynet 5A military communications satellite at the Satellite 2015 Conference in March 2015.  At the conference in March UK Defence Minister, Philip Dunne, said, "Today's announcement that Airbus will be moving one of the UK's Skynet 5 satellites to the eastern Asia-Pacific region is clear proof of how much our relationships with our international allies matter. This is the first time that we have had a secure communications capability in the region, and shows the depth of our commitment to our allies and partners in the region, including Malaysia, in humanitarian and peacekeeping operations."

Additional thoughts that were shared at the conference came from Evert Dudok, Head of Communications, Intelligence and Security at Airbus Defence and Space, “The move of Skynet 5A will enhance MILSATCOM capabilities where our customers need it, offering unique solutions for international security and humanitarian missions, and other coalition operations.”

The relocation will extend the Skynet constellation coverage and services from 178 West to 163 East, including the Indian Ocean and Western Pacific region. This will provide near-global military X-band and UHF coverage, expanding core service reach for the UK military and augment coalition capabilities in the region.

Airbus Defence and Space owns and operates the hardened Skynet X-band satellite constellation of 8 satellites and the ground network to provide all Beyond Line of Sight (BLOS) communications to the UK Ministry of Defence. The contract also allows other NATO and allied governments such as members of the five-eyes community (besides UK, the USA, Australia, New Zealand and Canada) to use the Skynet system to augment their existing services. Airbus Defence and Space also leases the X-band hosted payload on Telesat’s Anik G1 satellite which covers the Americas and parts of the Pacific including Hawaii and Easter Island.

“The Skynet 5 constellation consists of the world’s most powerful, nuclear hardened and protected, military X-band and UHF satellites,” said Colin Paynter, Head of Airbus Defence and Space UK. “With the move of Skynet 5A, we will expand the availability of our premium secure MILSATCOM services to allied nations in the region who need high grade resilient and secure communications services to complement their existing systems.”