Getting Checked Out B4 Final Push Off

[SatNews] The Indian GSAT-16 telecommunications satellite for Arianespace’s next heavy-lift Ariane 5 mission is undergoing a detailed checkout at the Spaceport in French Guiana ahead of its scheduled liftoff on December 4th. 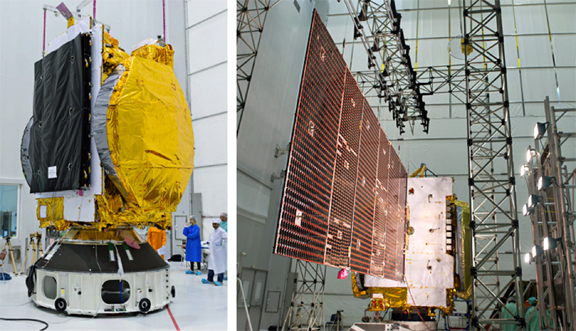 The pre-launch checkout process for India’s GSAT-16 is highlighted in the photos above. At left, this telecommunications satellite is shown during the initial fit-check validation with the adapter that will serve as its interface with Ariane 5; which was followed by the opening of GSAT-16’s solar panels inside the Spaceport’s S5C clean room facility.

GSAT-16 was designed, assembled and integrated by the Indian Space Research Organisation (ISRO), and validations performed in the Spaceport’s S5 payload preparation facility include its initial fit-check with launch vehicle hardware, as well as solar panel deployment. The latter step involved the extension of GSAT-16’s multi-segment solar panels, validating the proper operation before they are definitively stowed against the satellite in the final liftoff configuration. This particular test uses an overhead latticework that helps support the solar panel's weight—simulating zero gravity conditions of space as the panel opens to its full length.

GSAT-16 will weigh approximately 3,150kg. at liftoff, and is to deliver C- and Ku-band telecommunications services that include very small aperture terminal (VSAT) transmissions, TV broadcasting and emergency communications. For the upcoming launch, GSAT-16 will be joined by its co-passenger: DIRECTV-14, which was built by SSL (Space Systems/Loral) for operator DIRECTV. The December 4 flight with Ariane 5 is designated VA221 in Arianespace’s numbering system for its family of launchers, which also includes the medium-lift Soyuz and light-lift Vega.