So what is hot and how do you test it? Aerojet Rocketdyne completed hot-fire acceptance testing of eight auxiliary engines that will be used on the first flight of NASA’s Orion spacecraft with the Space Launch System rocket, slated to launch in 2018.

Aerojet Rocketdyne is responsible for the ESM’s eight auxiliary engines and is assisting Lockheed Martin in the refurbishment of the Orbital Maneuvering Subsystem (OMS) engine that Aerojet Rocketdyne originally manufactured for the Space Shuttle and will now be used as the main propulsion for ESM.

Orion’s European Service Module (ESM), which remains connected to the spacecraft throughout the mission until just prior to Orion’s re-entry to Earth’s atmosphere, provides propulsion, power, temperature control, air, and water for crew members. The European Space Agency (ESA) is providing the ESM to NASA for Orion. 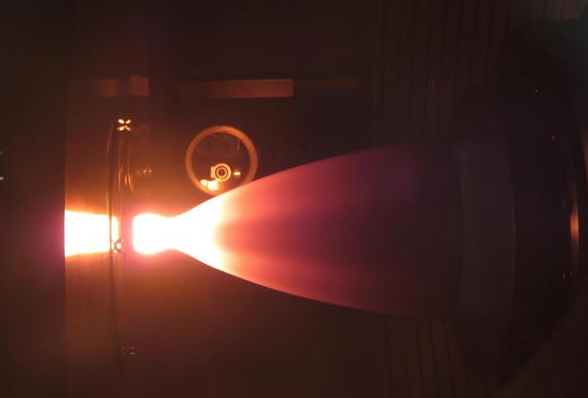 The ESM auxiliary engines are based on the company’s R-4D design and work in concert with the main OMS engine. By performing off-pulsing for steering and providing redundant capability for the main engine, the auxiliary engines are critical to ensuring astronaut safety. Each auxiliary engine provides 105 pounds of thrust and is capable of firing more than 7,000 seconds in space. They will be located in four pairs on the outside of the ESM.

Starting more than 40 years ago with the Apollo program, Aerojet Rocketdyne has built more than 700 R-4D engines that have compiled a record of 100 percent mission success. Variants of the R-4D have played critical roles in orbit-raising maneuvers for commercial satellites, as well as assisting NASA in exploring the solar system aboard spacecraft such as Cassini, which investigated Saturn and its moons.

“The design approach that has power and propulsion provided by a separate service module traces back to the Apollo program,” said Aerojet Rocketdyne CEO and President Eileen Drake. “The auxiliary engines we are delivering to Lockheed Martin and NASA for the European Service Module provide a redundant capability to the OMS engine capability.”

In addition to providing propulsion for the ESM, Aerojet Rocketdyne also supplies twelve 160-pound-thrust monopropellant engines for the Orion crew module’s reaction control system and the jettison motor that is instrumental in separating the launch abort system from the crew module to keep astronauts safe should a problem arise during launch.