[SatNews] Arianespace has successfully launched the ninth and tenth satellites in the Galileo constellation for the European Commission, under a contract with the European Space Agency (ESA). The company's eighth launch of the year, and the 12th Soyuz launch from the Guiana Space Center (CSG), Europe's Spaceport in French Guiana, took place on September 10, 2015 at 11:08 pm local time—its exact departure time.

Arianespace is proud of its role in the ongoing deployment of the Galileo constellation, which will offer to all citizens, especially Europeans, a new satellite navigation service under civilian control. 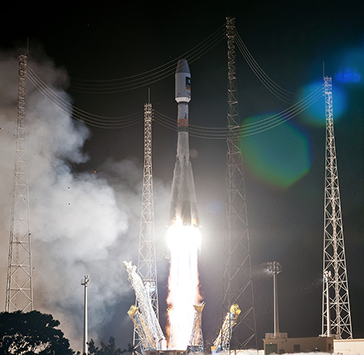 Departing the Spaceport’s ELS launch complex near the city of Sinnamary at the planned exact liftoff time of 11:08:10 p.m. (local time in French Guiana) on September 10, Soyuz deployed its two passengers after a flight of just under three hours and 47 minutes.  This included the propulsion of Soyuz’ first three stages and two burns of its Fregat upper stage.

In post-launch comments at the Spaceport, Arianespace Chairman and CEO Stéphane Israël noted these are the ninth and tenth Galileo spacecraft orbited by Arianespace, joining a constellation that ultimately will consist of 30 satellites.

Tonight’s passengers for Soyuz, named Alba and Oriana, are the latest FOC (Full Operational Capability) satellites, which are to operate in Galileo’s Orbital Plane A—one of three orbital planes being populated by the European navigation spacecraft.

The European Commission is managing and funding Galileo’s FOC phase, during which the network’s complete operational and ground infrastructure is being deployed.  Design and procurement agent responsibilities have been delegated to the European Space Agency (ESA) on the Commission’s behalf.

Arianespace is set to launch two more satellites with Soyuz by year-end, before handing this task over to Ariane 5 beginning in 2016 with a launch carrying four satellites. One more Soyuz and two more Ariane 5s will continue the activity in 2017-2018.

“Galileo keeps us busy, and Arianespace is very proud to be the reference partner of this European flagship space program,” Israël said.

After expressing his appreciation to the European Commission and ESA for their confidence, he noted that 2015 is an important year for Arianespace at the service of European institutions, with 11 payloads to be orbited utilizing the company’s family of Soyuz, the heavy-lift Ariane 5 and lightweight Vega.

“These satellites address all space applications: navigation, Earth observation, science and technology, meteorology and secured communications,” Israël explained. “Thanks to our launcher family, we are fully capable of addressing all needs of European institutions.”

Galileo is the first joint infrastructure developed by ESA and financed by the European Union. It features innovative technologies developed in Europe to benefit all citizens.

Through Galileo, Europe will deploy its own satellite navigation system, offering multiple applications. It will provide five distinct services, all offering global coverage: general public, commercial, safety of life, public regulated, search & rescue. The first services will be available by 2016.

The Galileo FOC (Full Operational Capacity) satellites are built in Europe by OHB System of Bremen, Germany as prime contractor, with all payloads supplied by SSTL (Surrey Satellite Technology Ltd.), a British subsidiary of Airbus Defence and Space.

Following this latest successful mission, Arianespace has now launched one-third of the satellites comprising Galileo, or 10 out of a total of 30. The next Galileo launch is planned for December 2015, once again using a Soyuz launch vehicle.

The ES version of Ariane 5 will then take over, carrying four satellites on each mission, with a launch scheduled for the second half of 2016. In 2017 and 2018, one Soyuz and two Ariane 5 ES launchers will be used to orbit another ten satellites.

Shortly after the official announcement of this successful launch, Stéphane Israël, Chairman and CEO of Arianespace, said, "As a benchmark partner in the Galileo program, responsible for the constellation deployment, Arianespace upholds its commitment to guaranteeing independent access to space for Europe. This evening's launch, the sixth of eight scheduled European governmental missions this year, marks a further step towards European independence in satellite navigation—and we are very proud of our contribution.

"I would like to thank the European Union, especially the Commission's DG Growth, as well as ESA for continuing to place their trust in us. I would also like to thank the Russian space agency Roscosmos for their commitment to our partnership based on the Soyuz launcher, which reaffirms its dual vocation for commercial and governmental missions. And of course thanks to CNES/CSG, to all staff at the space center, and to the teams at Arianespace for the availability of the launch facilities and this very successful eighth launch of the year."

On track for Arianespace’s record year of launches

Soyuz’ flight with Galileo’s Alba and Oriana satellites occurred during the eighth of 12 Arianespace missions planned for 2015, which will be a new record for the company’s launcher family.  Its preparations at the Spaceport included the first use of the new FCube fueling facility, which is part of improvements in French Guiana to increase launch capacity, flexibility and schedule robustness.

Arianespace, has been a partner since the start of the Galileo program

Israël acknowledged those who contributed to this latest Arianespace success, including the Russian federal space agency, Roscosmos, and the country’s industrial partners; along with the European support companies; the French CNES space agency, and Arianespace own teams.

The next Arianespace mission is scheduled for September 30, using an Ariane 5 to orbit two telecommunications satellites: Sky Muster for Australia’s nbn and ARSAT-2 for Argentina.