After successfully completing a series of final delivery reviews at Maxar’s spacecraft manufacturing facility in Palo Alto, California, the all-electric EUTELSAT 7C satellite was securely packed up and flown to the Arianespace launch base in Kourou, French Guiana.

Scheduled for launch on an Ariane 5 rocket next month, EUTELSAT 7C will provide broadcast services to multiple regions, including Africa, the Middle East and Turkey. 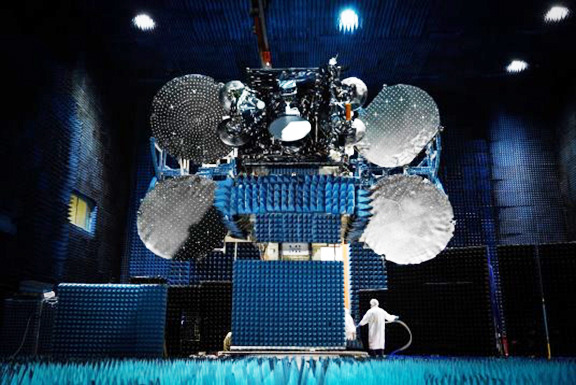 The EUTELSAT-7C satellite undergoing testing in Maxar’s antenna test facility in Palo Alto, California. Photo is courtesy of the company.

The satellite is based on Maxar’s 1300-class platform, which offers flexibility to support a broad range of applications and technology advances. In addition to 44 Ku-band transponders, the satellite is equipped with a steerable antenna beam, which will enable Eutelsat to adjust coverage as needed while EUTELSAT 7C is on-orbit. In addition to its main payload, EUTELSAT 7C will carry an advanced photonics payload which will demonstrate technologies to enable more efficient payload designs in the future.

Immediately after launch, EUTELSAT 7C will fire up its SPT-140 electric propulsion thrusters to begin orbit raising to 7 degrees East longitude in geosynchronous orbit, where it is designed to provide service for a minimum of 15 years.

All-electric satellites provide efficient solutions for satellite operators by reducing launch mass while increasing spacecraft flexibility and performance. As a pioneer in the field of electric propulsion, Maxar’s extensive experience includes in excess of 100,000 hours of active electric propulsion thruster operation across more than 30 spacecraft currently in orbit.