ILS And SS/L's Easy Breezy...Launch AsiaSat 7 On A Breeze (Launch) 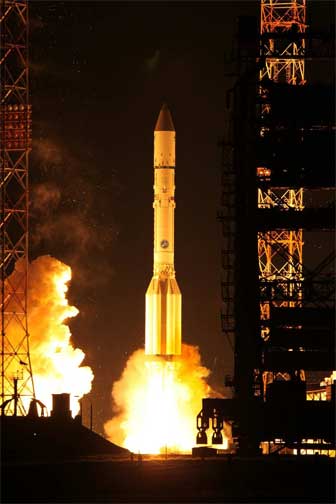 AsiaSat 7 successfully lifts off. Photo courtesy of International Launch Services
[SatNews] A good day for a launch, and so they did.

AsiaSat 7, a new communications satellite of Asia Satellite Telecommunications Company Limited (AsiaSat), was launched at Hong Kong Time 3:10 a.m. on the 26th of November on an International Launch Services (ILS) Proton Breeze M launch vehicle from the Baikonur Cosmodrome in Kazakhstan. This was the fifth commercial mission of the year for ILS and the eighth Proton launch so far this year.

A follow up report indicates that 9 hours and 13 minutes after liftoff, AsiaSat 7 successfully separated from the launch vehicle weighing over 3.8 metric tons, into the planned geostationary transfer orbit. The orbital maneuvering lifetime of the satellite will be extended as a result of the performance and accuracy of Over the next few days, the satellite will arrive at the geostationary orbit, some 36,000 km above the Equator.

This was the 371st launch for Proton since its maiden flight in 1965. The Proton Breeze M vehicle is developed and built by Khrunichev Research and Production Space Center of Moscow, Russia’s premier space industry manufacturer and majority owner of ILS.

Built by Space Systems/Loral, AsiaSat 7 is designed to replace AsiaSat 3S at the orbital location of 105.5 degrees East providing television broadcast and VSAT network services across the Asia-Pacific region. This new generation satellite will carry 28 C-band, 17 Ku-band transponders and a Ka-band payload. The regional C-band beam covers over 50 countries throughout Asia, the Middle East, Australasia and Central Asia.

Frank McKenna, President of ILS said, “This is our second launch with AsiaSat in just about two years, when we launched the AsiaSat 5 satellite. With this ILS Proton launch of AsiaSat 7, we have again played a pivotal role in AsiaSat’s strategic plan for the expansion of their business with our unmatched schedule assurance. My thanks go out to the ILS, Khrunichev, Space Systems/Loral and AsiaSat teams for their tireless efforts in ensuring a successful launch.”

“We are extremely pleased that AsiaSat 7 has successfully achieved this significant launch milestone. We greatly appreciate the efforts of our partners — International Launch Services, Khrunichev and Space Systems/Loral for their precision and professionalism in achieving this launch success,” said William Wade, President and Chief Executive Officer of AsiaSat.

“With AsiaSat 7 successfully launched well ahead of the planned date for AsiaSat 3S’s replacement, we can assure continuity of service to customers, while at the same time adding to our on-orbit capacity to service new business.”

AsiaSat 7 is a new generation satellite designed to replace AsiaSat 3S at the orbital location of 105.5 degrees East. Based on the Space Systems/Loral 1300 platform, AsiaSat 7 will support a broad range of applications for the Asia-Pacific region, including television broadcast and VSAT networks.